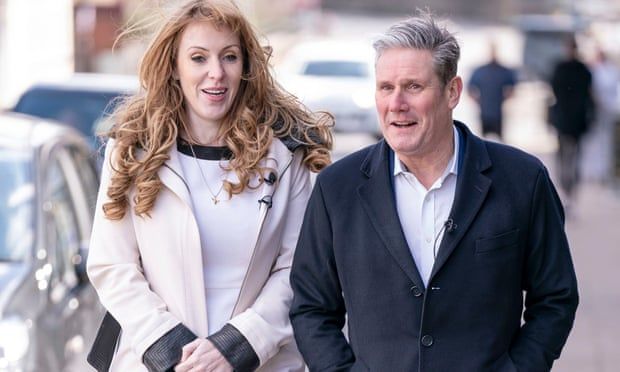 Labour confirms force has been in touch with leader and deputy as part of lockdown gathering investigation
Keir Starmer and Angela Rayner have been sent questionnaires by Durham police investigating whether they broke lockdown laws with a gathering for beer and curry on the campaign trail last year.

The Labour leader, who has promised to resign if fined for breaching the law, has denied any wrongdoing, saying he and his team were working on the night in question when they stopped for something to eat.

A Labour spokesperson confirmed that Starmer and Rayner had received questionnaires as part of the inquiry. At the time, people were not allowed to socialise indoors except with their own household or support bubble, but there were exceptions for meetings necessary for work.

The party claims it can prove the curry and beers shared between his team came as part of a long working day preparing for the Hartlepool byelection, meaning it was permitted under Covid rules.

But Durham constabulary opened an investigation after a campaign from rightwing newspapers and calls from Tory MPs for them to look into the incident at Durham Miners Hall on 30 April 2021.

With Boris Johnson refusing to resign after being fined by the Met police, Starmer has taken a different course by pledging to step down if the Durham force find wrongdoing. Starmer said this month he was determined to prove he had “different principles to the prime minister”, who has already been given a fixed-penalty notice for breaching lockdown rules in Downing Street.

He said he was confident he had not broken the rules but would resign if fined, saying: “The British public deserve politicians who think the rules apply to them.”

Detectives are considering interviewing the Labour leader face to face and the uncertainty around Starmer’s continued leadership of the party will continue for weeks, the Guardian understands.

As well as the Labour leader and his deputy, questionnaires have also been sent to other Labour activists police believe were at the gathering in the Durham constituency office.

The questionnaires are legal documents. After Starmer and Rayner complete and return them to police, officers will then compare their responses with other information from other sources.

Police will assess the veracity of their responses, and whether the threshold for a fine is met for Starmer or Rayner.

The investigation is not expected to be completed until the end of June or beginning of July.

Starmer is said to be confident he will not be fined because of the evidence that the takeaway was part of his working day. There is also the possibility that Starmer and Rayner could be criticised by the police but not fined – an approach the Durham force took after an inquiry into alleged lockdown breaches by Dominic Cummings, who was then the prime minister’s senior aide.
#Boris Johnson  #Johnson  #Covid
Add Comment