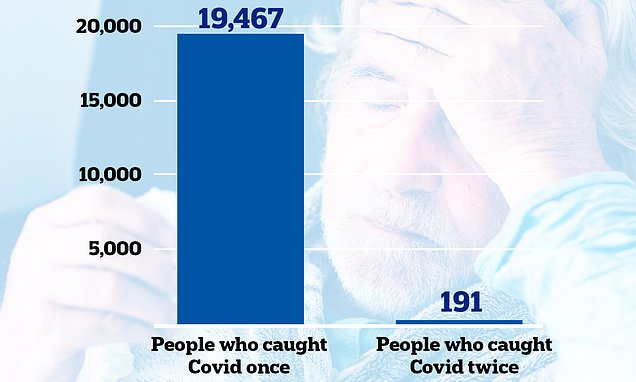 Just 1% of Covid survivors in Britain get reinfected, data shows

Less than one per cent of almost 20,000 participants in the Office for National Statistics' Covid infection survey who previously had the coronavirus went on to test positive for a second time.

Fewer than one per cent of Britons who previously had Covid caught it a second time, according to official estimates.

And the agency believes reinfected people are half as likely to suffer Covid symptoms when compared to those catching the virus for the first time.

It found that almost exactly half of people suffer symptoms within five weeks of testing positive for Covid for the first time.

Just one in four reinfected people (24 per cent) fell ill.

Reinfected Britons also had lower viral loads than first timers, signalling they were less likely to transmit the virus to others.

Experts told MailOnline the data confirms 'immunity is the best way out of the pandemic' and it is most safely achieved through vaccination.

But it comes as a real-world study, led by King's College London, found protection against infection from two vaccine doses drops after six months. 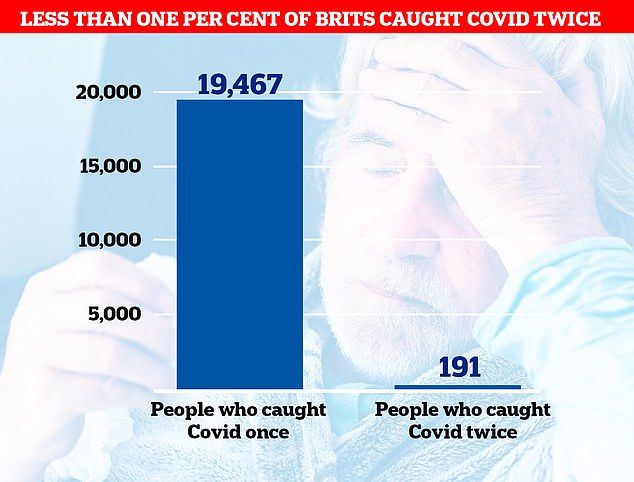 Data from the Office for National Statistics revealed that among 19,467 people who caught Covid between April 2020 and August 2021, only 191 of them went on to catch the virus again - fewer than one per cent of the group 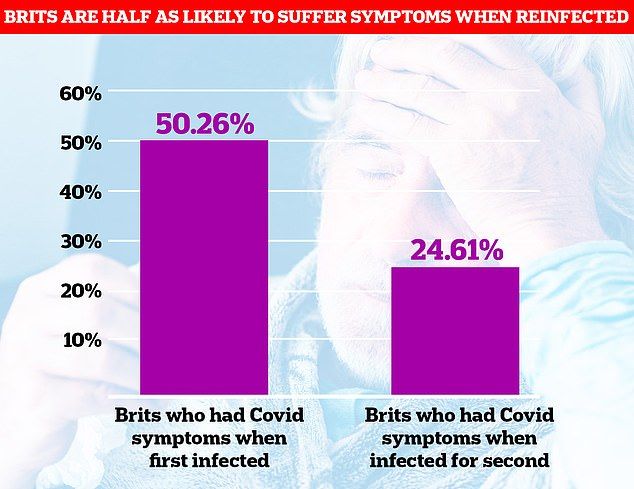 The ONS' figures showed that among the nearly 20,000 people in the survey who caught Covid once since the beginning of the pandemic, around half developed Covid symptoms. But just a quarter of those who caught the virus for a second time developed symptoms

The ONS identified 19,467 people who previously tested positive, so were 'at risk' of reinfection.

The ONS also considered a Covid case as a reinfection in 120 days had not lapsed, but a person had tested negative four times after first testing positive, before testing positive again.

Just 191 people in the group caught caught the virus for a second time, equating to less than one in 10.

Government statisticians also looked at cycle threshold (Ct) values of volunteers, and compared the average scores between the first and second infection.

The Ct value in those who got reinfected was 'significantly lower' compared to the first infection, suggesting a lower viral load and less risk of experiencing illness, the ONS said.

Ct values show the amount of SARS-CoV-2 virus presented in a nose or throat swab sample, with a lower value equating to a higher viral load.

A higher Ct value means scientists had to spend longer looking at the sample before they were able to spot the virus, indicating there is less of it in their swab.

When first infected, the group had an average Ct value of 28.63, but this rose to 31.46 when they were infected a second time, signalling there was less of the virus present in their test samples.

And only 47 of these people (24.61 per cent) experienced any Covid symptoms within 35 days of testing positive for the virus.

This is much less than then 50.26 per cent of reinfected volunteers that reported symptoms when they were first infected.

On average, volunteers got reinfected 172 days - around five and a half months - after first testing positive.

Professor James Naismith, a structural biologist at the University of Oxford, told MailOnline: 'The data confirm that immunity is the best way out of the pandemic. Immunity by vaccination is very safe and effective.

'Immunity by infection is a gamble. Infection can lead to death or serious illness and/or long Covid.

'For everyone 16 or over, I would urge them to get vaccinated. There will be no normality until we vaccinate all those who can be infected and can spread infection.'

Dr Alexander Edwards, an associate professor in biomedical technology at the University of Reading, told MailOnline: 'I think we are still trying to work out exactly how much protection is provided by natural infection.

'It’s hard to pin down because it does change over time, it changes with variants, and will vary greatly between different individuals.

'As with vaccines, no-one is completely protected, but it’s very likely that immunity will mostly protect people from severe disease. Yet we also know people can get very serious illness even on reinfection.'

Meanwhile, a study of 1.1million Brits who received Covid jabs found protection against catching the virus falls within six months.

Researchers found protection against infection after two shots of Pfizer decreased from 88 per cent at one month to 74 per cent at five to six months.

For AstraZeneca, effectiveness dropped from 77 per cent to 67 per cent at four to five months.

It's unclear whether the waning immunity against infection also means people are less protected against hospitalisation and death.

But Professor Tim Spector, the lead scientist behind the study, said high levels of infection would ultimately lead to more deaths. He warned effectiveness could drop below 50 per cent by winter, and urged Britain to 'urgently' get its act together on booster vaccines.

The findings add to the mounting pressure faced by ministers to implement a mass booster rollout.

The Joint Committee on Vaccination and Immunisation, which advises the Government on the vaccine drive, is expected to only green light third doses for vulnerable adults with suppressed immune systems.

The boosters will almost certainly be offered to the 3.7million Britons classified as 'clinically extremely vulnerable', with diseases such as cancer.

But originally it was hoped that the programme would be open to all over-50s, key workers and sick patients - which would have included as many as 32m people.

Some scientists have said vaccines should be used to administer first doses to people in other countries before third doses are offered in the UK.