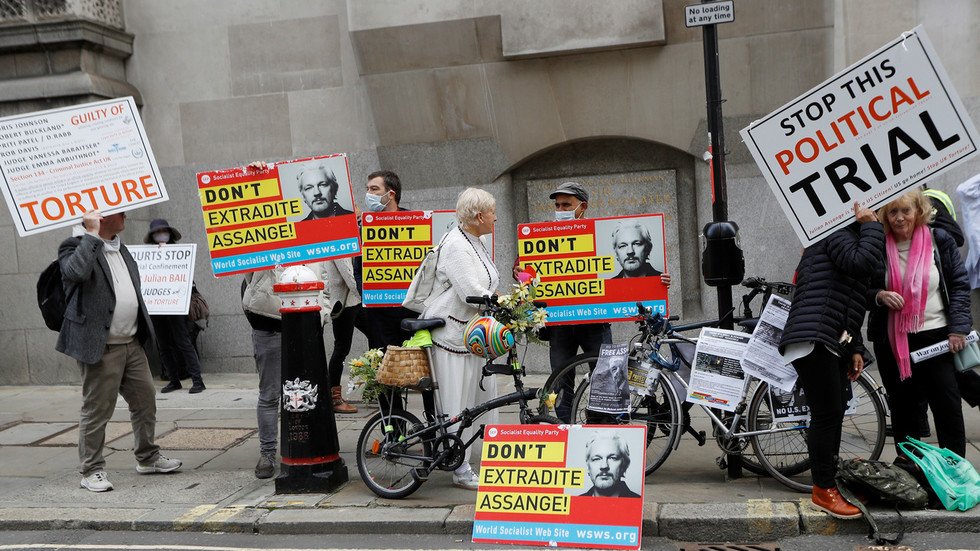 Judge threatens to remove Assange from extradition trial, says will continue in his absence if interruptions continue

After shouting “nonsense” at a lawyer representing the US government, WikiLeaks founder Julian Assange was ordered by a UK judge to remain silent or be removed from his own trial.

Assange is currently facing extradition to the US over accusations he conspired to hack government computers and broke an espionage law over the release of confidential cables in 2010 and 2011.

On the second day of Assange’s London trial, which was already delayed from May due to the coronavirus pandemic, lawyer James Lewis, representing the US government, said at one point Assange was facing extradition and charges not over the leaking of confidential documents, but because of the publication of informants’ names, which in turn allegedly put their lives at risk.

Witness Clive Stafford-Smith, an attorney and activist who founded the human rights organization Reprieve, disagreed with this point and the men argued back and forth.

“You cannot tell this court how this case will be prosecuted, you’re making things up,” Lewis said at one point.

“I can tell you how American cases are prosecuted,” Stafford-Smith shot back.

The exchange caused Assange to say aloud, “This is nonsense.”

Judge Vanessa Baraitser then warned Assange he could be removed from the proceedings if he continued to have outbursts.

“If you interrupt proceedings and disrupt a witness who is properly giving their evidence it is open to me to continue without you in your absence,” she said. “This is obviously not something I wish to do. I am, therefore, giving you a clear warning.”

There were several disagreements on Tuesday between Assange’s defense and the prosecution about the details of the charges Assange is facing.

Stafford Smith said to Lewis, "I think you’re very wrong on the way cases are prosecuted in the US."

Lewis kept maintaining only cables with names of informants will surface in a US trial. But that doesn't mean uncharged documents won't factor into court proceedings. #Assange

Protesters around the world have expressed their disapproval of Assange’s charges and potential extradition, insisting it is all politically motivated.

NSA whistleblower Edward Snowden, whom President Donald Trump has suggested could be pardoned in the near future, has slammed Assange’s trial as “a farce.”

Read this and tell me that the show trial of Assange doesn't read like something from Kafka. The judge permits the charges to be changed so frequently the defense doesn't even know what they are, the most basic demands are denied, no one can hear what the defendant says—a farce. https://t.co/d7oYBLBvky