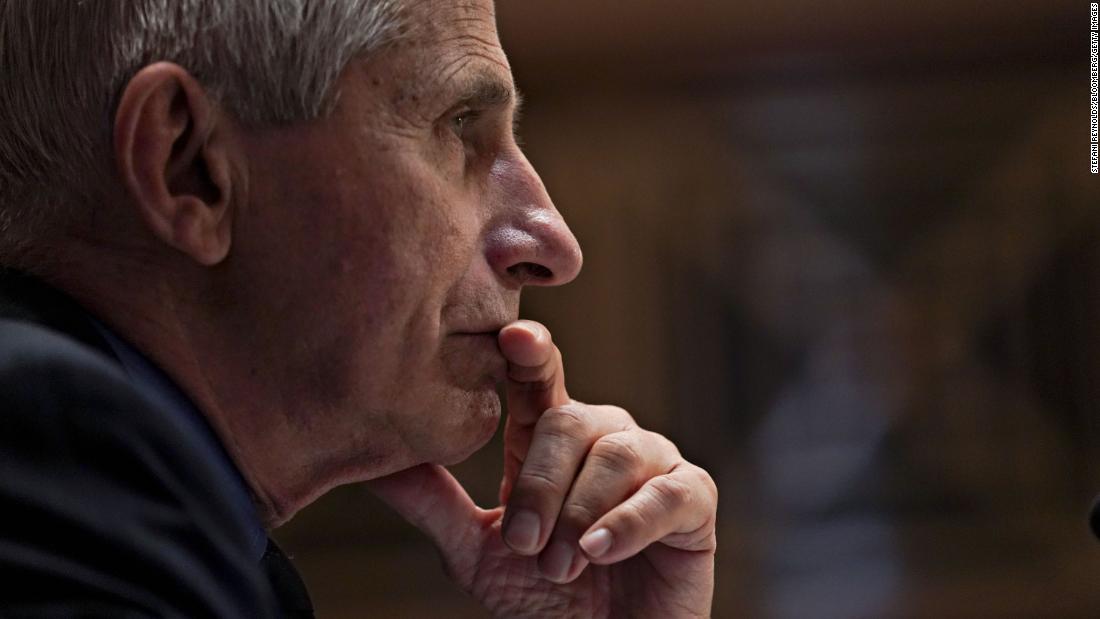 'It's going to be within our capability' to prevent another coronavirus surge, Fauci says

The downturn in Covid-19 cases, hospitalizations and deaths could end with another spike in infections, Dr. Anthony Fauci said Sunday. But the US could still prevent that spike with higher vaccination rates.

Southern states, many of which have been hotspots, are now starting to see a decrease in Covid-19 cases while many states that have started experiencing cold weather -- mostly in the North and Midwest -- are seeing an uptick, according to data from Johns Hopkins University.

New cases in Georgia and Florida are down 37% and 25%, respectively, compared to last week, JHU data showed. Both states had among the 10 lowest case rates in the past week. But a handful of states -- in regions where cold weather has set in -- are seeing an increase. This pattern is similar to what happened last year.

Alaska, particularly, had more Covid-19 cases per capita than any other state over the past week, JHU data showed. Cases jumped 14% over the week before, and there were 125 new cases per 100,000 people each day, about five times the national average.

Cases are trending in the right direction in the US overall -- the daily average is down 10% over the past week.

The downturn of cases, hospitalizations and deaths could end with another spike, Dr. Anthony Fauci said Sunday. But the US could still prevent that spike with higher vaccination rates.

"If we don't do very well in that regard, there's always the danger that there will be enough circulating virus that you can have a stalling of the diminishing of the number of cases, and when that happens, as we've seen in the past with other waves that we've been through, there's the danger of resurgence," Fauci, the director of the National Institute of Allergy and Infectious Diseases, said on "Fox News Sunday."

Although cases still remain high, with an average of about 85,000 new infections a day as of Sunday, they are down by more than 8,000 from a week prior, according to JHU data. Deaths are down an average of more than 200 a day from the start of the month.

Progress in the numbers is threatened, however, by the low rates of vaccination. As of Monday, 57% of the total population was fully vaccinated against the virus, according to the Centers for Disease Control and Prevention.

And though health experts do not know exactly what proportion of the population needs to be protected to control the spread of the virus, Fauci has said a vast majority will need to be vaccinated.

Fauci does not think another spike in cases is inevitable.

"It's going to be within our capability to prevent that from happening," said Fauci, who is also the chief medical adviser to President Joe Biden.

"The degree to which we continue to come down in that slope will depend on how well we do about getting more people vaccinated."

Health experts have pointed to vaccine mandates as a key tool to keeping cases down and relieving hospital strain, but some officials stand staunchly against the measures.

Fauci has been a proponent of mandates, saying the data shows that they work in getting more people vaccinated. And though it would be preferable to convince people to choose to get vaccinated, that is not always feasible, he said.

Arkansas Gov. Asa Hutchinson said Sunday that he believes both federal and state mandates are counterproductive to increasing vaccination rates.

Hutchinson told NBC News he believes muddled messaging at the highest levels of government has "slowed down acceptance of the vaccine and increased resistance."

"I'd like to see us get to, without the mandate battle, let's just encourage the vaccine acceptance, build confidence in it, and that's the direction we need to go," the governor said.

Asked specifically about the success of Tyson Foods and Walmart's vaccine mandates in the state of Arkansas, the governor said it is "absolutely" proof mandates work.

Hutchinson pointed out that employers must navigate a nuanced, on-the-ground reality of some employees wanting a vaccine mandated work environment to feel safe while others do not. Hutchinson said, based on that predicament, the choice of whether to mandate should be left in the hands of employers.

Former US Food and Drug Administration Commissioner Dr. Scott Gottlieb said "urgent research" is needed into a different version of the Delta variant of the coronavirus that has been seen in the UK, although there's no evidence that it's more transmissible.

"The variant has been in the UK since about July, but it has been slowly increasing in prevalence. There's no clear indication that it's considerably more transmissible, but we should work to more quickly characterize these and other new variants. We have the tools," he wrote in a tweet on Sunday.

"This is not a cause for immediate concern but a reminder that we need robust systems to identify, characterize new variants," he said.

A report released by the UK Health Security Agency on Friday says in the week beginning September 27 -- the last full week with complete sequencing data -- this version accounted "for approximately 6% of all sequences generated, on an increasing trajectory."

Covid-19 cases, hospitalizations and deaths have all been rising in the UK, where there are no countrywide mask mandates and few travel restrictions from other countries.

Even with waivers, some paid thousands for Covid hospitalizations, study says

Many insurers waived Covid-19 hospitalization costs in 2020, but those waivers didn't cover everything and out-of-pocket expenses cost patients a lot more than other respiratory diseases, according to a new study.

The study published Monday in JAMA Network Open found that out-of-pocket spending for Covid-19 hospitalization was about $4,000 on average for people with private insurance. For people with Medicare Advantage it was more than $1,500.

Researchers looked at hospitalization records for more than 4,000 people in 2020 and found that this spending was about four times the average out-of-pocket cost for other respiratory infections in 2019.

"The findings suggest that out-of-pocket spending for COVID-19 hospitalizations may be substantial if insurers allow cost-sharing waivers to expire," the study said.

Minnesota Gov. Tim Walz announced that children in the 12-to-17 age group will be eligible for a $200 gift card if they get fully vaccinated.

Additionally, all children that are fully vaccinated will be entered into a weekly drawing for a $100,000 scholarship to a Minnesota college.

"It's an incentive, it's an acknowledgment that the sooner we get this group vaccinated, the sooner we spread our vaccinations, we're seeing it around the world," Walz said. "Once you start to get close to that 80% number, you start to see amazing things happen as the infections drop off."

Oh ya 42 days ago
Yes go get the jab that does not stop you from getting or spreading the china flu to stop the next spike. You cant make this stuff up folks. And notice that the uptick is in the states getting colder and the deaths will spike there also with your ammune system destroyed by the jab
View all comments (1)Add comment