The British government is hoping to vaccinate up to a million people a day in a bid to keep the country on track for a gradual relaxation of coronavirus pandemic restrictions.

Officials, however, acknowledge they’re taking a calculated risk going ahead Monday with allowing separate households to socialize indoors and for some international travel to resume.

Former and current scientific advisers have voiced concern about keeping to a previously announced roadmap of unlocking, fearful that the coronavirus variant circulating in India, which appears to be also spreading quickly across Britain, may rapidly push up hospitalizations and deaths again.

Mark Walport, a former chief scientific adviser and a member of the government’s key advisory panel for emergencies, known as SAGE, warned Sunday the country is at a perilous moment. “My personal judgment is that I will do things outside as far as possible,” he said. “My advice is that just because you can do something doesn’t necessarily mean you should.”

A surge in cases in the northwest of England and parts of London of the B.1.617.2 variant, which was first detected in India, has added an unpredicted complexity to the government’s determination to open up the country. Prime Minister Boris Johnson has come under pressure from his own backbench lawmakers and from businesses to keep to a previously announced timetable allowing Britain to start returning to greater normality.

They fear any delays to the staged reopening will hold the country back from recovering from its worst economic slump in three centuries. 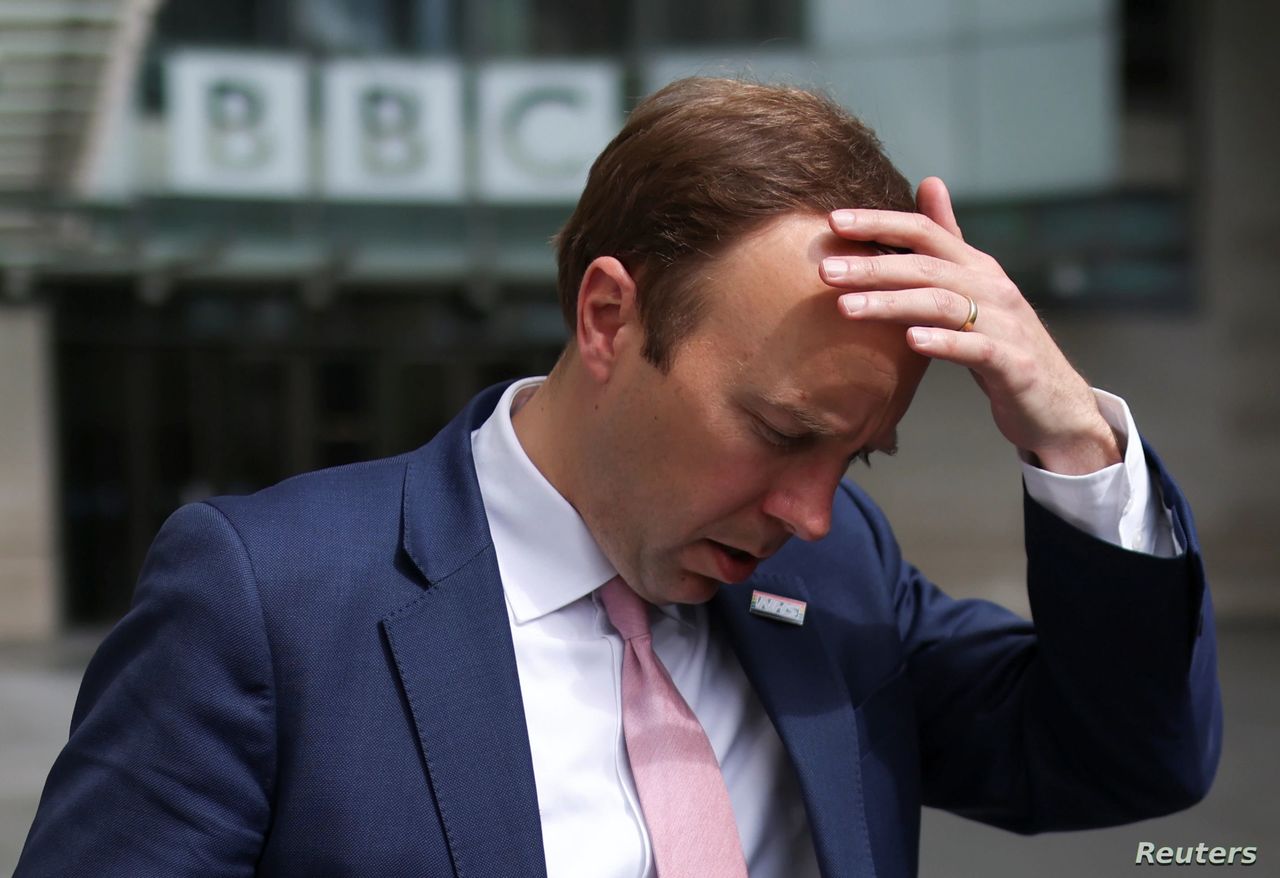 Britain’s health secretary, Matt Hancock, acknowledged Sunday to Sky News that the variant has the potential to “spread like wildfire” among those who haven’t yet been vaccinated and could “spread even faster” than the so-called Kent variant, which drove Britain’s deadly second wave of infections over Christmas, forcing the country to lock down.

A study by the University of Oxford has suggested that the current crop of vaccines still works against the Indian variant. Even so, five people who received a single jab of a COVID-19 vaccine have been hospitalized with the variant, and one person who received both jabs also had to be admitted to the hospital last week. COVID-19 is the disease caused by the coronavirus.

Nonetheless, Hancock said Monday’s planned easing of some restrictions would still go ahead but added the final phase of easing scheduled to commence June 21 would have to be reviewed next month. “We need to be cautious, we need to be careful, we need to be vigilant,” he said. 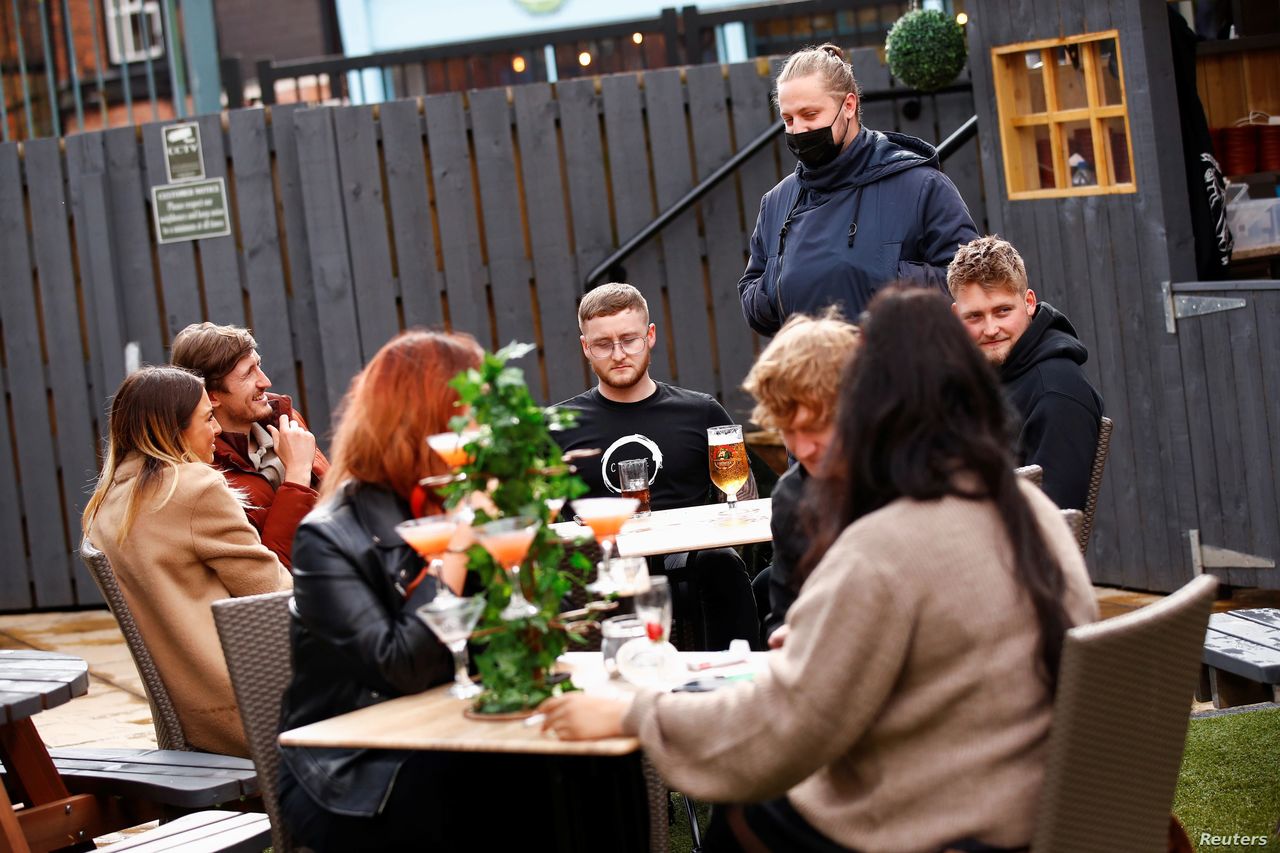 Customers at The Swinging Witch pub enjoy drinks, as lockdown eases amid the coronavirus disease (COVID-19) pandemic, in Northwich, Cheshire, Britain, May 15, 2021.

Another prominent government adviser, John Edmunds, an epidemiologist at the London School of Hygiene & Tropical Medicine, said the government should not rule out delaying the lifting of restrictions. “I think we have to monitor this very carefully. I don’t think we should rule anything out. So if things look like they’re getting worse rapidly, then I do think that action needs to be taken,” he said.

Nearly 70% of the country’s adult population has received at least one jab of either the AstraZeneca or Pfizer vaccine. Officials expect to increase daily doses from 500,000 to 800,000 within the next 10 days by drawing on a stockpile of 3.2 million doses. They hope the daily run-rate will reach around a million doses by July, helped by the likely approval in the next few days of the one-shot Johnson & Johnson vaccine.

Most senior opposition politicians have been expressing support for the easing on Monday of restrictions but focused their criticism on why the government delayed placing India on a so-called red list of countries and blocking travelers from the sub-continent. India was reporting more than 100,000 cases a day by April 5 but was not added to Britain’s red list until April 23.

Steve Reed, Labor's local government spokesman, says 20,000 passengers entered the country from India in the nearly three weeks between April 5 and April 23. The government placed the country in a “riskier position that we should have been in,” he says.

While backing households mixing from Monday, some opposition politicians are against permitting more international travel. Yvette Cooper, chair of the Home Affairs select committee in the House of Commons, told the BBC the government should reverse its decision to allow Britons to travel abroad for vacations.

“The government needs to slow down its plans. I don’t understand why it’s lifting some of its international travel restrictions. I think they should be being much more cautious about that,” she said.

Britain has had one of the world's highest official coronavirus death tolls at 127,675. But because of a fast rollout of vaccines, it now has among the lowest infection rates. The even-day average of daily infections is running at around 2,000 new cases, say health authorities.