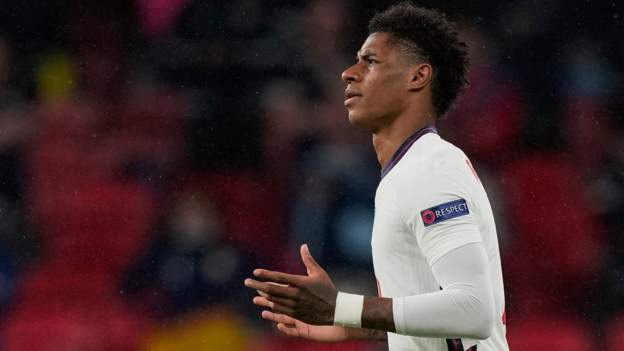 I won't apologise for who I am - Rashford

England and Manchester United forward Marcus Rashford apologised for his penalty shootout miss but said he "will never apologise for who I am" after he was one of three players subjected to racist abuse following England's Euro 2020 final defeat to Italy.

Rashford, along with Jadon Sancho and Bukayo Saka missed their spot-kicks.

All three were targeted on social media after the game.

"I felt as if I'd let everyone down," Rashford wrote in a statement.

The 23-year-old added: "I can take critique of my performance all day long, my penalty was not good enough, it should have gone in but I will never apologise for who I am and where I came from.

"I've felt no prouder moment than wearing those three lions on my chest and seeing my family cheer me on in a crowd of 10s of thousands."

A mural in Rashford's hometown of Withington was defaced after his penalty miss, before it was covered in messages of support.

Earlier on Monday, England boss Gareth Southgate said the racist abuse issued after the defeat was "unforgivable", while Prime Minister Boris Johnson and the Football Association have also condemned it.

The Metropolitan Police is investigating the abuse and said "it will not be tolerated", while the UK Football Policing Unit (UKFPU) has also launched an investigation. 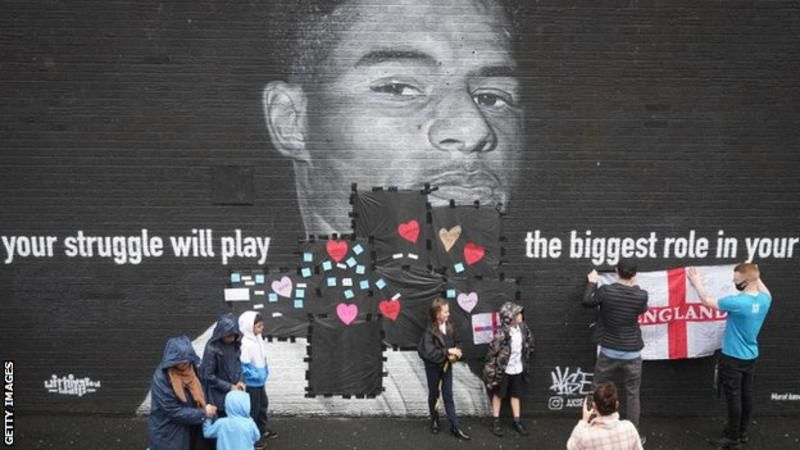 "I've had a difficult season, I think that's been clear for everyone to see and I probably went into that final with a lack of confidence. I've always backed myself for a penalty, but something didn't feel quite right.

"During the long run-up I was saving myself a bit of time and unfortunately the result was not what I wanted. I felt as though I had let my team-mates down. I felt as if I'd let everyone down. A penalty was all I'd been asked to contribute for the team. I can score penalties in my sleep, so why not that one?

"It's been playing in my head over and over since I struck the ball and there's probably not a word to quite describe how it feels. Final. 55 years. 1 penalty. History. All I can say is sorry. I wish it had of gone differently.

"Whilst I continue to say sorry I want to shout out my team-mates. This summer has been one of the best camps I've experienced and you've all played a role in that.

"A brotherhood has been built that is unbreakable. Your success is my success. Your failures are mine.

"I've grown into a sport where I expected to read things written about myself.

"Whether it be the colour of my skin, where I grew up, or, most recently, how I decide to spend my time off the pitch.

"I can take critique of my performance all day long, my penalty was not good enough, it should have gone in but I will never apologise for who I am and where I came from. I've felt no prouder moment than wearing those three lions on my chest and seeing my family cheer me on in a crowd of 10s of thousands.

"I dreamt of days like this. The messages I've received today have been positively overwhelming and seeing the response in Withington had me on the verge of tears. The communities that always wrapped their arms around me continue to hold me up.

The Professional Footballers' Association (PFA) says that shared data with Channel 4 news after the Euro 2020 final highlighted that over 850,000 tweets were analysed across the whole tournament and showed:

The PFA said that, while a number of these tweets were deleted - the accounts have not been permanently suspended by Twitter.

"Our preliminary analysis suggests the volume of abuse flagged around the Euro 2020 final, aimed mainly at Jadon Sancho, Bukayo Saka, Marcus Rashford and Raheem Sterling, was higher than the rest of the tournament combined," the PFA added.

Twitter said it had removed more than 1,000 posts over the past 24 hours and suspended a number of accounts for violating its rules.

'You're not England fans and we don't want you'

England captain Harry Kane has told those behind the racist abuse of Rashford, Sancho and Saka: "You're not an England fan and we don't want you."

The Tottenham striker added on Twitter: "They deserve support and backing, not the vile racist abuse they've had since last night.

"Three lads who were brilliant all summer had the courage to step up and take a pen when the stakes were high.

"If you abuse anyone on social media you're not an England fan and we don't want you."

Defender Tyrone Mings also took to Twitter to talk of his pride in the team reaching the final but added: "Waking up today and seeing my brothers being racially abused for being brave enough to put themselves in a position to help this country, is something that sickens, but doesn't surprise me."

He went on to criticise Home Secretary Priti Patel who last month described players taking the knee against racism as "gesture politics".

England midfielder Kalvin Phillips said he was "disgusted" at the racist abuse directed towards his team-mates.

"Absolutely disgusted at the unnecessary racist abuse I've seen online directed at my team-mates," the Leeds player said on Twitter.

"Nothing but love and respect for my brothers for their courage BukayoSaka87, Sanchooo10 and MarcusRashford, keep your heads up high. We'll come back stronger."

Free meals and book clubs - Rashford's work off the pitch

In October last year, Rashford was given an MBE for services to vulnerable children in the UK during the coronavirus pandemic.

He successfully campaigned for the government to allow about 1.3 million children to claim free school meal vouchers in England's summer holidays

Rashford also set up a book club to get disadvantaged children reading more.

He has previously highlighted incidents of when he has been the target of racial abuse, saying he received "at least 70 racial slurs" on social media following Manchester United's Europa League final loss to Villarreal in May.