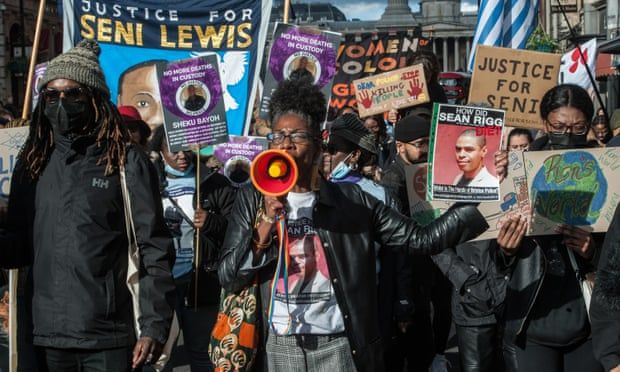 Hundreds march to remember those who died in state custody

Hundreds of friends and relatives of people who died in prison or police custody have held a procession through central London in remembrance and calling for justice for their loved ones.

Supporters of the United Friends & Families Campaign gathered in Trafalgar Square just after midday on Saturday for the march, which has taken place every year in London since 1999.

They carried banners with photos and pictures of those who they say had died at the hands of the police and state, and called out their names as they marched.

“It’s an annual memorial. It’s in memory of all loved ones that have died at the hands of the state in the United Kingdom, and we are remembering them today,” said Marcia Rigg, 57, from Mitcham.

Rigg’s brother, Sean Rigg, suffered a heart attack in Brixton police station in 2008 after he was restrained by police while suffering an episode of mental ill health. She is now the chair of the UFFC.

“It’s a memorial procession as opposed to a protest march, even though it is a protest against the non-accountability of any of these deaths in custody,” Rigg said. “I’m certain there is not one family here that has received justice.”

The UFFC was started in 1997. Among the founding members was Brenda Weinberg, whose brother, Brian Douglas, was killed when he was struck in the head with a baton by a police officer in 1995.

Standing in the crowd with her daughter, Weinberg, now 61, from Wimbledon, said: “It’s just sad that 22 years on we are still doing this, and there are still new families. That’s the sad part.

“It would have been Brian’s birthday yesterday.”

“We stand in solidarity with Sarah Everard’s family, and my only wish is that they could be standing with us today; but we are marching with her as well,” Rigg told the Guardian.

At Downing Street, the march shared space with a noisy protest against the military coup in Sudan, with speakers’ amplified voices battling to be heard over the other protesters’ chants and airhorns.

Among those who spoke was Ajibola Lewis, the mother of Olaseni Lewis. Her son died after being restrained by police at Bethlem royal hospital in south London in 2010, after checking himself in voluntarily for a mental health episode.

Keshia Johnson had travelled from Manchester with her family. Her 17-year-old brother, Ronaldo Johnson, died in April after the car he was riding in as a passenger crashed during a police chase.

“We have just been batted from the police to the IOPC [Independent Police Complaints Commission] for information, but we are no wiser as to what’s happened,” she said.