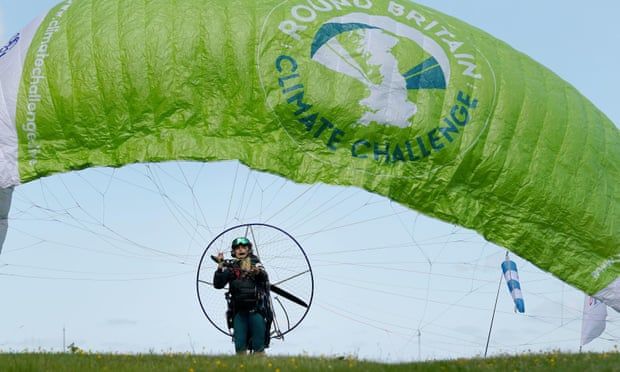 A woman dubbed “the human swan” has said she is feeling excited as she prepares to launch a world-first circumnavigation of mainland Britain in a paraglider powered with an electric engine, to raise awareness about climate change.

She will take off from a location near Glasgow on Monday 21 June, weather permitting, in an adapted electric paramotor, flying anti-clockwise around the coast and returning to land in the area approximately six weeks later.

The Australian is known for global expeditions with migratory species but has turned her focus to the climate crisis after losing her family home to bushfires last year.

Dench said: “I’m going to be trying to fly a complete circumnavigation of mainland Britain in an electric-powered paramotor, and I’m doing it to try and demonstrate just how far we can go in terms of decarbonising our transport and our lifestyles in general.

“The real thing we’re hoping to do though is make use of the journey and the fact that I have to stop frequently to change batteries to stop and land and speak to people who have solutions for climate change, because there are lots of people with brilliant ideas, brilliant projects already in train, that I think can show us that whilst Britain drove the industrial revolution, we can drive the green revolution too.

“We’re doing it in the run-up to Cop26 – if Britain is going to host the global conference on climate change then it’s the best time for the whole country to rally behind big actions, big bold actions from the politicians.”

“I think it’s going to be a really interesting and inspiring journey, and who knows how the electric paramotor will fare? No-one has ever done a long journey in an electric powered paramotor before, but I’ve got an excellent ground crew and team behind me so we’ve got the best chance of success that we can try for.”

The expedition, sponsored by EDF, is described as an extreme test over challenging landscapes. 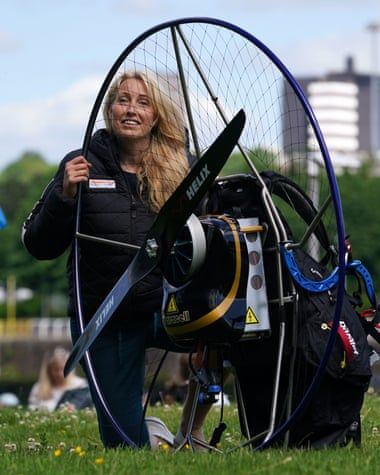 The electric paramotor will replace the usual two-stroke engine Dench has used for long expeditions.

She hopes to set a new Guinness world record for the fastest, and first, flight around Britain in a paramotor – and the first long-distance expedition attempted with an electric paramotor.

She said it gives a fascinating perspective on life below, while passing birds are not too bothered by her presence.

Dench said: “You do get incredible views, but they also put a lot of the issues in this country in context, so you really see a landscape and how everything fits together, so that is really fascinating.

“But it is beautiful up there as well. Learning to understand and read the air, flying like the birds, they tend to just see you as another flying aircraft when you’re in the air, particularly with the electric paramotor which is so silent.”