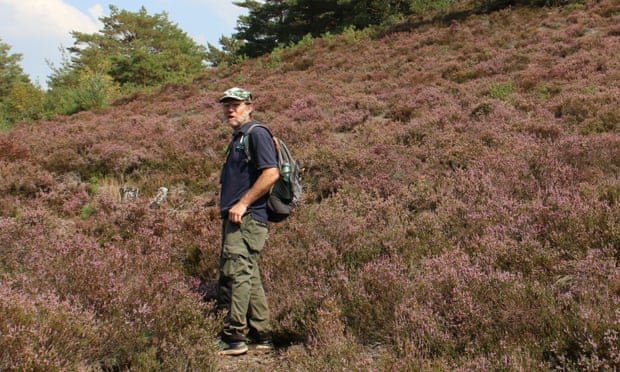 Described as ‘gorgeous’ by the man who found it, the great fox-spider has not been seen since 1993

One of Britain’s largest spiders has been discovered on a Ministry of Defence training ground in Surrey having not been seen in the country for 27 years.

The great fox-spider is a night-time hunter, known for its speed and agility, as well as its eight black eyes which give it wraparound vision. The critically endangered spider was assumed extinct in Britain after last being spotted in 1993 on Hankley Common in Surrey.

The two-inch-wide (5cm) arachnid had previously also been spotted at two sites in Morden Heath in Dorset. These are the only three areas in Britain, all in the comparatively warmer south, where it has been recorded.

Mike Waite from Surrey Wildlife Trust discovered the elusive spider after two years of trawling around after dark looking for it on the Surrey military site, which the MoD is not naming for security reasons.

“As soon as my torch fell on it I knew what it was. I was elated. With coronavirus there have been lots of ups and downs this year, and I also turned 60, so it was a good celebration of that. It’s a gorgeous spider, if you’re into that kind of thing,” said Waite. 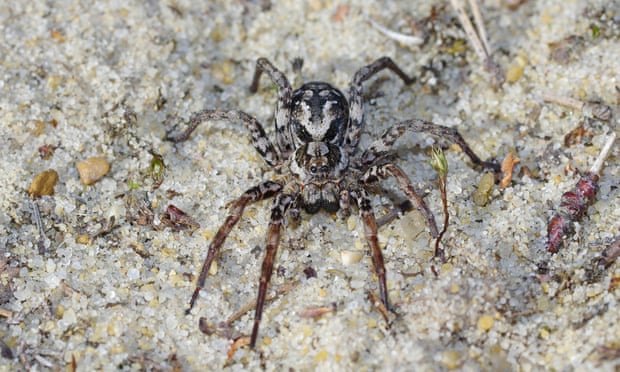 The great fox-spider is one of the largest members of the wolf-spider family, hunting spiders that do not use webs to catch prey. It chases down beetles, ants and smaller spiders before pouncing on them and injecting deadly venom. The prey is immobilised and its internal organs liquefy. The spider – which poses no risk to humans – feeds using fang-bearing jaws.

M0D sites are often kept open because military exercises cause minor disturbance to the vegetation, which stops succession of shrubs and trees. Waite used aerial photos to find bare sandy patches, which suit the spider’s ambush-style hunting techniques, and spotted the first one next to Jeep tracks. In total, he found several males, one female and some unidentifiable immature spiderlings.

Nick Baker, TV presenter and president of the British Arachnological Society, described the discovery as “the most exciting thing to happen in wildlife circles for quite some time”. He said: “It’s about as handsome as a spider gets, it’s big and now it’s officially a member of the British fauna again.”

The great fox-spider, a native species, was first found 120 years ago and has been seen only a handful of times since. Despite their size, the spiders are difficult to spot because they are mainly nocturnal and have effective mottled brown camouflage. During winter, they dig burrows under rocks and line them with silk, going into a sort of hibernation state.

The MoD heathland where the spider was found is managed by the Amphibian and Reptile Conservation Trust. It is recognised as a nationally important site for populations of rare birds, reptiles and invertebrates, especially sand lizards, smooth snakes, Dartford warbler and nightjar. MoD sites are often good for wildlife because they are protected from human activity and are large enough to give wildlife space to move.

The great fox-spider likes warmer climates and is more common on the European mainland, particularly on coastal sand dunes in Holland and Denmark.

“It makes me think how hard have we looked for it on our coasts? Have we been looking hard enough?” said Waite, who believes the spider could be more widespread than people think.

Waite is now conducting nocturnal great fox-spider hunting expeditions on neighbouring sites and hopes one day to write a scientific paper about them. “It seems to be the most important thing I’ve done in a long career. It has inspired me to make something of it and find out as much as I can about this species in the UK,” he said.