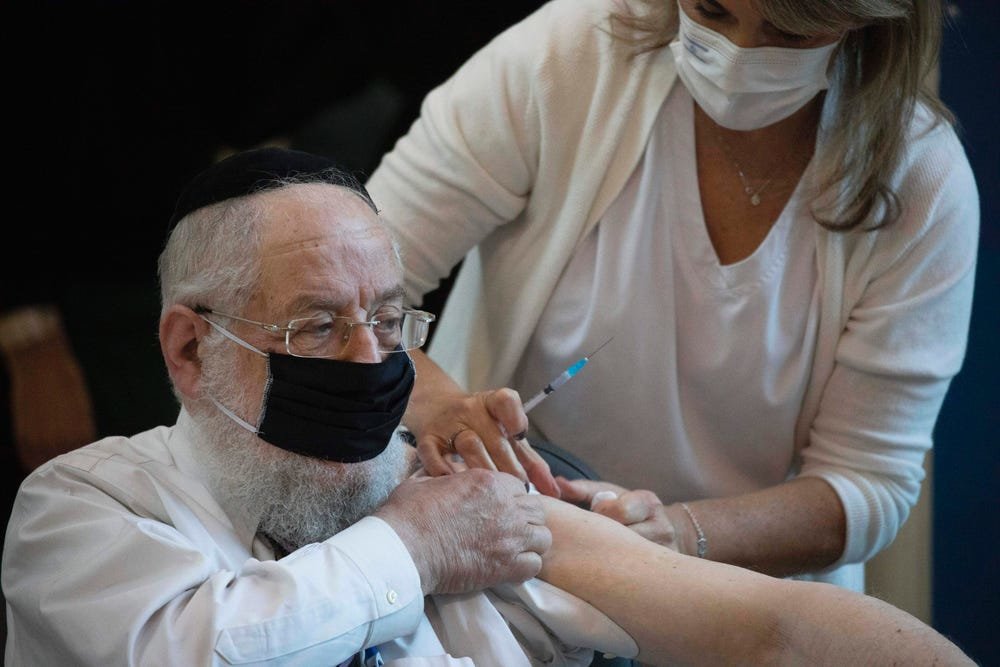 Israel is far ahead of any other country in administering COVID-19 vaccines.

As of Thursday, the nation had administered 800,000 doses of the Pfizer/BioNTech vaccine, meaning approximately 8.84% of its 9 million residents have gotten their first dose, according to Bloomberg's vaccine tracker. Health providers in Israel are administering doses to about 150,000 people per day.

Yonatan Adiri, who served as Chief Technology Officer to former Israeli president Shimon Peres, said he expects Israel will have "a fully vaccinated population" by the end of March. Adiri is now the CEO of Israeli health technology startup Healthy.io. He added that completing vaccinations for higher-risk groups should happen sooner — hopefully by the end of February.

"We expect 10% of the population to be vaccinated by this weekend, which will constitute 50% of all those at high risk and group #1," Adiri told Business Insider.

Israel has some innate advantages relative to other countries that have approved vaccines. Its population is small and dense, so vaccines don't have to travel too far. But the country also has a digitized, vertically integrated healthcare system that has enabled it to distribute vaccines quickly to vulnerable groups.

Israel has already secured enough doses of the Pfizer and Moderna vaccines for all of its residents to receive at least an initial shot, and for the majority of the population to receive the full two doses. 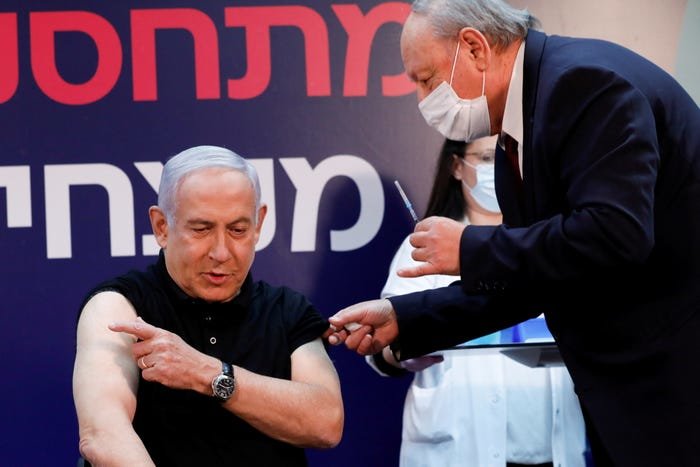 Israeli Prime Minister Benjamin Netanyahu has been criticized for some of his decisions during the pandemic, including a premature reopening over the summer that led to a major outbreak and triggered a second lockdown. So far, more than 423,000 Israelis have had been diagnosed with COVID-19, and 3,300 have died.

Anxious to beat back the virus and return Israel to normal before his upcoming March election, Netanyahu personally reached out to Pfizer chief executive Albert Bourla multiple times this fall. At one point, he bragged that he spoke to the CEO at 2 a.m., according to the Associated Press.

So far, that effort seems to have worked. Israel has secured 8 million doses of the Pfizer/BioNTech vaccine. It has also reached a separate deal with Moderna for 6 million shots. That's enough for 7 million people to receive two shots — about 77% of the Israeli population. Or it's enough for 4 million to receive a single shot, and 5 million to receive both. Only a handful of other nations have secured more total doses of both vaccines, including the US, the UK, Japan, and Canada.

If Israel continues to vaccinate residents at its current rate, it could provide the entire population with an initial dose in about two months. It's possible that single dose may provide significant protection on its own, according to Dr. Chris Gill, an infectious-disease specialist at Boston University.

Gill told WBUR that a single dose of Pfizer's vaccine may be 80 to 90% effective, based on the Phase 3 trial data collected between patients' first and second doses. Pfizer, however, says it does not have data to support the efficacy of a single dose.

Moderna, meanwhile, collected data from patients who only received one dose of the vaccine; that data showed that a single dose could be 80 to 90% effective.

The FDA has struck a more cautious note about single-dosing for both vaccines, saying, "there appears to be some protection against COVID-19 disease following one dose."

But even if a single dose doesn't wind up being effective in preventing COVID-19, Israel could reach herd immunity in just a few months.

Israel's vertically integrated, government-sponsored healthcare system has helped its vaccine rollout. All Israelis over 18 must register with an insurance agency backed by the government, and the system is funded by a progressive tax so that almost 70% of Israelis receive unconditional, free care. Community health centers can be found within 10 minutes of most Israelis, and those centers are being used as vaccine distribution hubs.

Israel's national healthcare system is "globally recognized as a leader" in providing care and information digitally, according to The Wall Street Journal. Adiri said he has helped elderly parents figure out how to get their vaccines on a smartphone app. The app, he said, provides Israelis with their personal health information, including medical history, and allows them to make appointments online – including for COVID-19 vaccines.

"I opened the app and it was asking me, 'where would you want to get vaccinated?'" he said, adding, "I set my [parents'] first appointment and they told me, 'you've been allotted a Pfizer vaccine at a designated location,' and automatically scheduled a second-dose appointment."

On his own phone, the app wouldn't let Adiri make an appointment because he's not over 60, he said.

"We're not the most orderly country in the world. We're not Singapore," he said. "That said, the correlation between the facts, the people getting vaccinated, and the policy, shows the execution is really really in line with the epidemiological logic and policy-maker's assigned priorities." 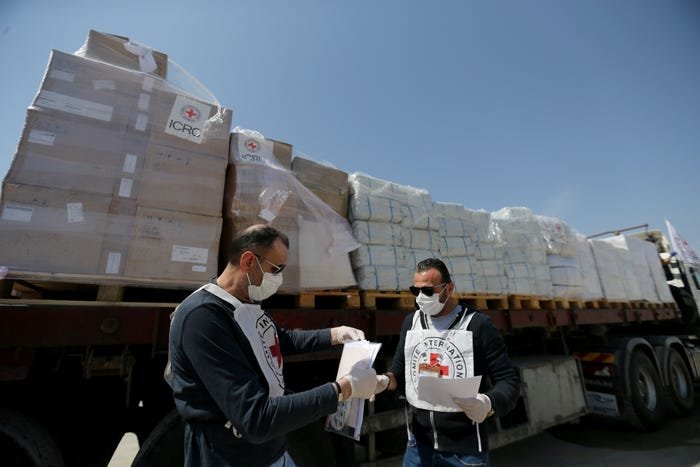 Palestinian workers check medical equipment donated by the International Committee of the Red Cross at Kerem Shalom crossing in the Gaza Strip, April 21, 2020.

Israel's vaccine successes, however, do not extend Palestinians living in the West Bank and the Gaza Strip. Palestinians have just one mobile refrigeration unit in Jericho capable of storing the Pfizer-BioNTech vaccine, according to Al Jazeera. Human-rights groups have called on the country to allocate vaccines for Palestinians and provide logistical support for distribution.

"Israel bears moral and humanitarian responsibility for vaccinating the Palestinian population under its control," Physicians for Human Rights said on December 16, according to The Washington Post.

Israel has said it could may provide surplus doses of its vaccines to Palestinians. Still, Gerald Rockenschaub, the head of the WHO office for the Occupied Palestinian Territory, said it could be "early to mid-2021" before Palestinian territories receive vaccine doses.