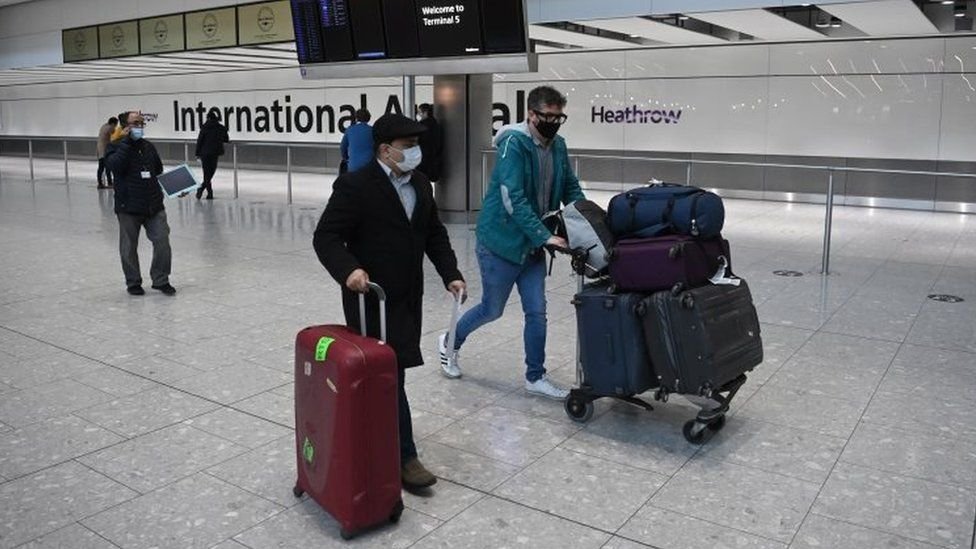 Ministers will discuss at a meeting on Monday whether to further tighten restrictions at UK borders, including the possibility of hotel quarantines for travellers, the BBC has been told.

At a Downing Street news conference on Friday, Prime Minister Boris Johnson did not rule out taking further action.

It comes amid increased concerns over the spread of new coronavirus variants.

Under current travel curbs, almost all people arriving in the UK must test negative for Covid to be allowed entry.

The test must be taken in the 72 hours before travelling and anyone arriving without one faces a fine of up to £500.

All passengers are also required to quarantine for up to 10 days, although the isolation period can be cut short with a second negative test after five days in England.

The only people not subject to the conditions are children under 11, hauliers, air, international rail and maritime crew, and passengers from the Common Travel Area - comprised of the Republic of Ireland, the Channel Islands or the Isle of Man

Scotland, Wales and Northern Ireland have their own quarantine rules, which differ slightly.

As of Monday, travel corridors, which exempted passengers arriving from some countries from quarantine, were suspended throughout the UK.

"We may need to go further to protect our borders.

"We don't want to put that [efforts to control Covid] at risk by having a new variant come back in."

One more infectious variant , which was first identified in Kent, has already spread widely across the UK.

And, at the briefing, the prime minister announced that early evidence suggests this variant may be more deadly.

Other new variants causing concern have been identified in South Africa and Brazil in the weeks since the Kent variant was discovered. Those discoveries led to direct flights to the UK from all South American countries and several southern African countries being suspended.

Scientists fear these variants discovered in other countries may interfere with the effectiveness of vaccines and evade parts of the immune system.

While those travelling into the UK are asked to abide by the 10-day isolation and told they can be subject to checks, London mayor Sadiq Khan is among those who have called for the UK to adopt the use of enforced quarantine in hotel rooms.

The policy is among the measures in Australia that has limited the country to just 28,750 positive cases during the entire pandemic, less than the UK currently has every day.

Travellers who choose to go to Australia have to pay for their rooms at one of a number of selected quarantine facilities - and have all their meals delivered to their room throughout a stay of at least 14 days. They get tested twice for Covid during that period and if they test positive their quarantine is extended for a further 14 days.

Meanwhile, passengers arriving into London's Heathrow airport this week have complained of queues at passport control and what they described as poor social distancing, after the latest travel restrictions - requiring travellers to show proof of their negative Covid tests - came into force.

On Friday, former British ambassador Peter Westmacott posted a picture on Twitter of long queues at the airport.

A government spokesman said people "should not be travelling unless absolutely necessary".

The statement added: "You must have proof of a negative test and a completed passenger locator form before arriving.

"Border Force have been ramping up enforcement and those not complying could be fined £500.

"It's ultimately up to individual airports to ensure social distancing on site."

With all parts of the UK under strict virus rules amid high levels of infection, only essential foreign travel is permitted in the current advice from the Foreign Office.

A further 40,261 cases, and 1,401 deaths within 28 days of a positive coronavirus test were reported on Friday in the UK.