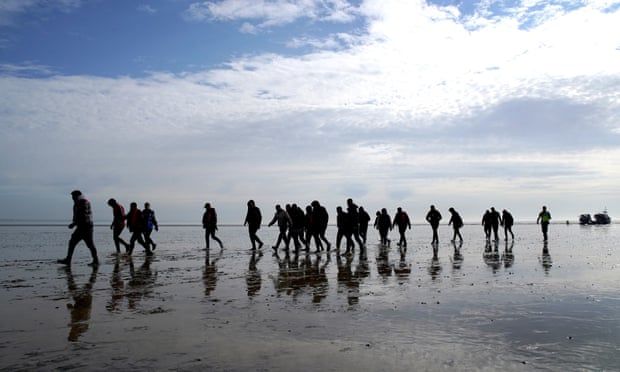 Department says previously announced option of serving arrivals to UK with notices while living in community has not been used
All the asylum seekers whom ministers want to send to Rwanda have been placed in detention centres after arriving in the UK on small boats, the Home Office has confirmed.

When the government announced its controversial plans last month to send asylum seekers to Rwanda, officials said some of those issued with notices of intent that they would be offshored would be served with the notices while living in the community and would have 14 days to appeal against the decision. About 100 asylum seekers are thought to have been issued with notices of intent so far.

However, the Home Office has confirmed to the Guardian that everyone they want to send to Rwanda has been locked up in detention centres, with the community option not currently being used.

Many who arrive on small boats are in poor physical and mental condition, and some charities have reported that those detained for offshoring are traumatised, bewildered and do not understand what is happening to them.

The news comes as the Mail on Sunday reported that 10 asylum seekers have withdrawn their asylum claims since the Rwanda plan was announced, in a development hailed by some government sources as a sign that the plan drawn up by the home secretary, Priti Patel, is having the desired deterrent effect.

However, there is little indication that the policy is having a deterrent effect in northern France, with about 9,000 asylum seekers crossing the Channel so far this year, including hundreds since the policy was announced in mid-April. More than 100 people have made the Channel crossing since Thursday.

Those detained so far for offshoring include a group of people from Sudan who crossed the Channel in a kayak on 9 May – not using the people smugglers whose business model the home secretary has said she wants to smash – some Albanian asylum seekers and at least one man from Afghanistan who arrived approximately a week ago in a small boat.

Enver Solomon, the chief executive of Refugee Council, said: “The government is now so determined to treat any person fleeing war or oppression, including those escaping Ukraine and Afghanistan, as a commodity to be shipped to Rwanda that it is choosing to detain them immediately. This is appallingly cruel and will cause great human suffering. We urge the government to immediately rethink its plans and focus on the workable alternatives clearly at their disposal. Safe routes including allowing people to apply for humanitarian visas is one important option.”

Bella Sankey, the director of Detention Action, said: “It seems that Priti Patel’s Rwanda expulsion policy is being used as justification to detain increasing numbers of traumatised people indefinitely in prison-like facilities. We’ve heard reports of people confused about why they are detained and wholly unable to access legal advice.”

A Home Office spokesperson said: “Our new, world-leading migration partnership with Rwanda will see those who make dangerous, illegal or unnecessary journeys to the UK relocated to Rwanda and, if recognised as refugees, they will be supported to build a new life there. The government has the power to detain individuals for examination or pending their removal from the UK – those who have been issued notices of intent are being detained under these existing powers.”
#Afghanistan  #Priti Patel
Add Comment