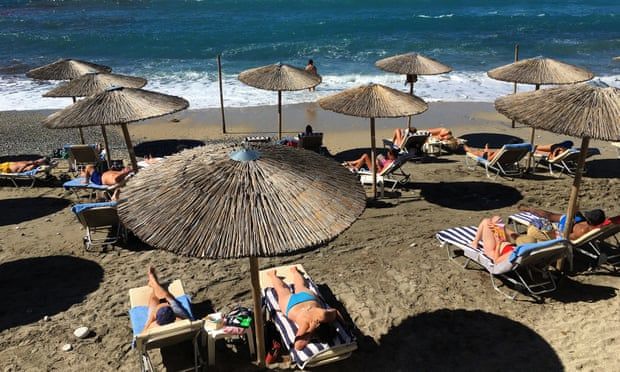 Holidaymakers heading to and from the European mainland are being warned of a growing incidence of coronavirus, especially in tourist hotspots, which risks hampering travel plans.

Health officials are calling in some cases for a reintroduction of face masks and other measures, and are urging travellers to exercise personal responsibility, warning that an escalation of the virus could lead to the swift return of restrictions.

Greece, Spain, France and Germany – as well as further-afield destinations such as the Caribbean islands, Morocco and Tunisia – are all recording significant rises in cases.

As holidaymakers study national coronavirus infection rates before embarking on their journeys, despite difficulties in making comparisons due to the different ways in which nations test, those who are yet to be fully vaccinated – with a double dose and either one or two booster shots, depending on their age or risk factors – are being urged by medical professionals to get the recommended protection before travelling.

Greece is among the countries to have reported a rise in cases in recent weeks. Most affected right now are people aged between 18 and 24, and cases are most concentrated in popular tourist regions, the Greek health ministry has said. Last weekend about 11,700 new infections were reported within 24 hours, an almost threefold increase on the previous week.

The number of new infections on the islands of Corfu, Cephalonia and Zakynthos in the Ionian Sea has risen in recent weeks. Crete, the region of Attica including the Greek capital, Athens, the southern Aegean including islands such as Mykonos and Paros, plus the islands of Rhodes and Kos are also very much on the authorities’ radar.

Greece abolished the majority of its coronavirus measures in May. Face masks are still obligatory in public indoor spaces, however, including hospitals as well as on public transport and cruise ships.

Experts across Europe also talk of a high number of unreported or under-reported cases as the legal obligation to report infections in many places has been dropped.

Across Spain, cases are up more than 60% from last month, although still a fraction of what they were at the start of the year. In particular the virus is making itself felt on the islands of Mallorca, Ibiza, Menorca and Formentera, favourite destinations of Britons, Germans and Scandinavians. Doctors there have called the current level “alarming”, with local media reporting that a boundless appetite for concentrated gatherings to party, after years of pandemic restrictions, is creating “idyllic” conditions for the spread of the highly contagious Omicron variant BA.5, which is helping to fuel a new wave.

Currently 80% of all infections there are said to be of the BA.5 variety, according to Antonio Oliver, the chief virologist of the Hospital Son Espases, Mallorca’s biggest hospital. He said his experience reflected what was happening on the Spanish mainland as well as the Canary islands.

People who become infected are no longer required to go into self-isolation in Spain, but an obligation to wear a mask in public indoor spaces and public transport remains in place.

On a positive note, Oliver said while the region was experiencing its seventh wave, “it is the case that this wave is less visible than was the case with earlier infection episodes”. He put this down to two main reasons: vaccines mean the number of serious illnesses is lower, and authorities are no longer closely controlling the disease’s systematic spread. The seven-day incidence rate is now gauged only for over-60s, who are statistically far more likely to end up being treated for their symptoms in hospital.

Nationwide in Spain there are currently about 10,000 people being treated for Covid-19, making up 8% of all hospital bed capacity. This is very low compared with when the virus was at its height, but still high enough to cause a considerable strain on resources.

France has registered a growing number of cases, up almost 80% in just over two weeks. But a reintroduction of restrictions does not have any popular support. An obligation to wear a face mask was scrapped recently, although the health minister, Brigitte Bourguignon, appealed to people’s “civic duty” to continue to do so on public transport and in other crowded places.

Italy has recorded a five-month high in cases and continues to insist on mask wearing on public transport. Roberto Speranza, the health minister, has urged people who are infected to “do their duty” and stay at home.

Portugal is seen as a higher-risk destination after a surge in cases, and travellers are still required to prove that they are vaccinated, tested or recovered and to wear masks. The seven-day incidence rate remains high compared with most nearby countries, at 1,150 per 100,000 population. 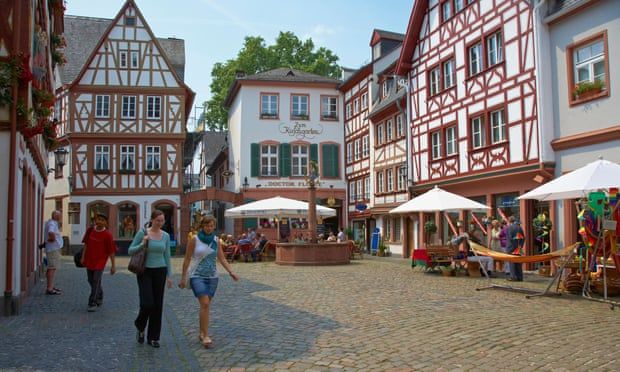 Mainz, Germany: uncertainty over coronavirus-related travel disruption is expected to lead to a rise in domestic tourism in Europe.

As cases rise in Germany due to the spread of the BA.5 Omicron subvariant, deaths from Covid currently number about 500 a week, which health authorities describe as unacceptably high. Cases on intensive care wards are up 12% from a week ago.

Germany’s health minister, Karl Lauterbach, who has a reputation for his blunt utterances on the virus, said while he was hopeful that the summer holidays would lead to its confinement, it was also to be expected that the country would have to be prepared for some “very serious variants” that would return from abroad with holidaymakers and would be felt in the autumn.

People are being urged to take up a new vaccine engineered to cope with the Omicron variant from September. The German chancellor, Olaf Scholz, has not shied away from admitting that mask wearing is likely to become obligatory again in the coming autumn and winter. Currently in Germany people are required to wear medical FFP2 masks on public transport and in hospitals and medical practices. Those infected are required to isolate for at least five days, after which they are free to leave home if they test negative.

German and Austrian holidaymakers concerned that their vacations might be disrupted by illness or virus-related cancellations are being urged to take out coronavirus travel cancellation insurance. Such uncertainty is thought likely to fuel domestic tourism yet again throughout Europe.

Anke Herrmann, the owner of a travel agency in Leipzig, said the insurance was proving particularly popular with customers travelling to the Mediterranean and helped people already nervous about booking due to the virus to go ahead. “Some people are understandably scared also due to the war in Europe and rising inflation – they wonder if they should do it at all,” she said.

Michael Stürmer, a virologist from Frankfurt, said most people did not need to worry about the course of the illness any more should they get sick, but rather about the risk of getting stuck. “Those who are flying should be as consistent as possible about wearing a mask and avoiding crowds,” he told the broadcaster Hessenschau. “It’s hard to do much more than that. You should just be aware of the risks and of the fact that it can easily go belly-up.”

Christian Drosten, a virologist who has been a leading voice in explaining the virus to Germans, warned against advice that was being spread via social media urging people to catch the virus deliberately in the summer so as to be immune against it in the harsher winter months.

“That is total nonsense,” he told Der Spiegel. “You’d never manage to get that many people infected in summer that it would keep the cases low in winter anyway … No one should get infected deliberately, one should continue to avoid this as far as possible, not least because of the risk of long Covid.”

Drosten said that for his part he would be enjoying a camping holiday.