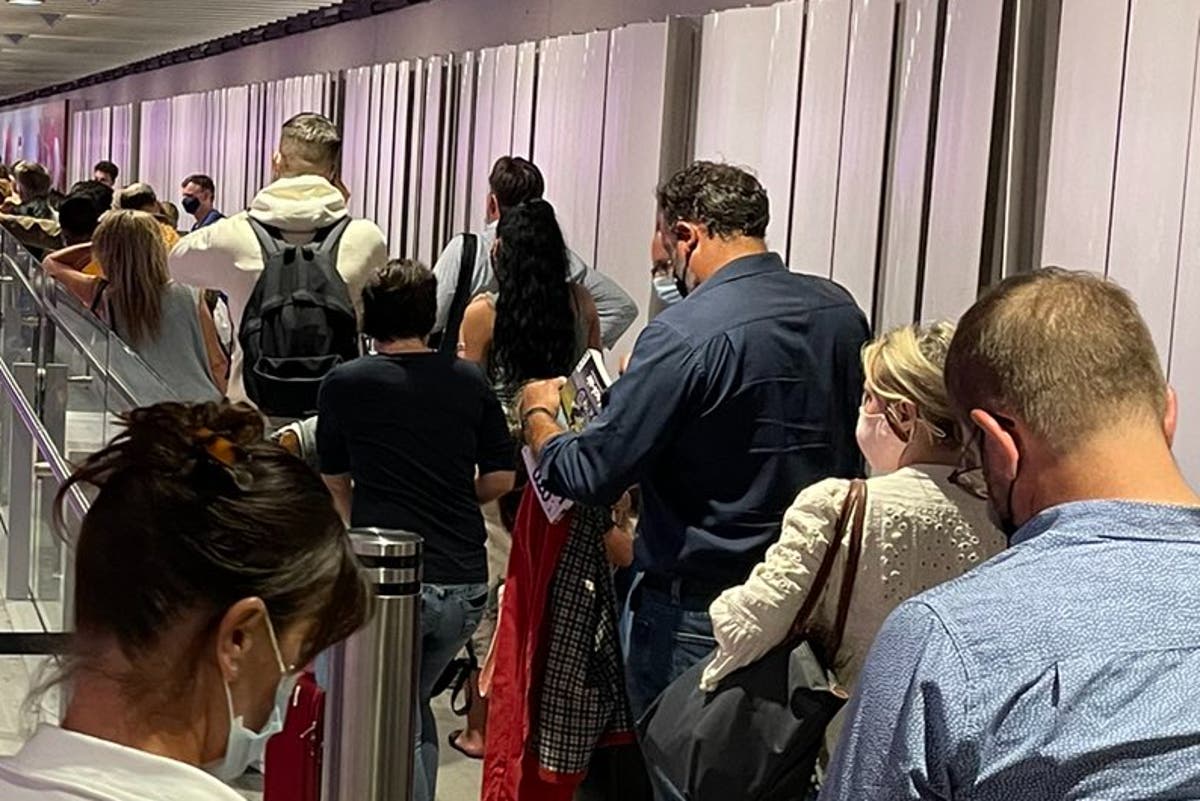 Heathrow and the Home Office apologised for the ‘unacceptable queueing times’

Holidaymakers were said to be “fainting” as they waited in overcrowded lines with “no ventilation” at Heathrow Airport Terminal 5.

Chaotic photographs taken on late Friday night and in the early hours on Saturday revealed hundreds of weary passengers waiting to get into the UK.

Heathrow and the Home Office have apologised for the “unacceptable queueing times” travellers faced.

One holidaymaker said he saw a pregnant woman faint while waiting for immigration checks.

Sonny Singh told Sky News: “Children were screaming and crying. The queue moved about five feet in the space of about 45 minutes.

“Then when the pregnant woman fainted, it finally got through to someone somewhere. The kids were then put on the side to sit while the adults waited in the queue and it began moving faster.”

Travellers described the experience as “scary” and “horrendous” in a flurry of tweets while they waited in the queues.

Among the comments, one traveller wrote: “Been traveling for over 20 years all over the world. Never seen people collapse in line until today @HeathrowAirport Terminal 5. Scary experience.”

Others wrote: “@HeathrowAirport There are people collapsing in Terminal 5 Arrivals due to overcrowding and no ventilation. Some Covid secure measures…”

“Horrendous kettling at #heathrow terminal 5 arrivals tonight. No Border Force. No ventilation. No fire exits. No explanation. Held there for over an hour. People fainting. Panicked skeleton Heathrow ground team not knowing what to do.”

Heathrow has called on Border Force to provide extra support to the airport staff over the rest of the weekend.

A Heathrow spokesperson said: “We are very sorry that passengers faced unacceptable queueing times in immigration due to too few Border Force officers on duty. Border Force were aware of the extra demand from families and we are very disappointed that they did not provide sufficient resource.

“We have additional Heathrow colleagues to support in managing queues and to hand out passenger welfare including water but we need every immigration desk to be staffed at peak times. We have escalated this with Border Force and expect them to provide a better service over the remainder of the weekend.”

The Home Office criticised UK Border Force, its own immigration agency, describing the scenes as “unacceptable.”

It said in a statement: “Throughout the pandemic we have been clear that queue times may be longer as we ensure all passengers are compliant with the health measures put in place to keep the UK public safe. However, the very long wait times we saw at Heathrow on Friday night were unacceptable.

“This is the busiest weekend of the year for returning passengers, with particularly high numbers of families with children under the age of 12 who cannot use e-gates.

“Border Force is rapidly reviewing its rosters and capacity and flexibly deploying our staff across the airport to improve waiting times.

“We are working very closely with Heathrow Airport and its airlines and we are all committed to making sure all passengers can have a safe and hassle-free journey.”