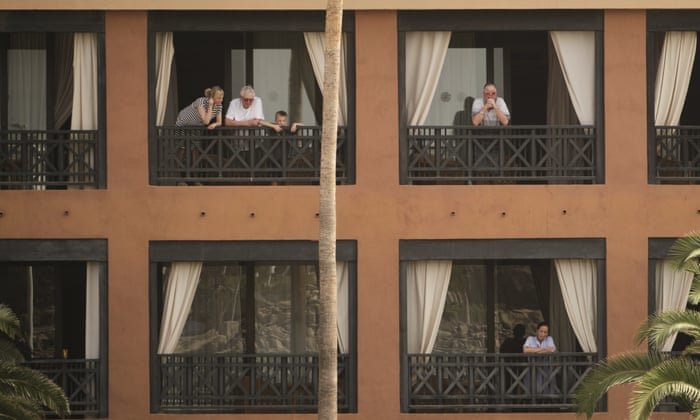 'Holiday from hell': the Britons on coronavirus lockdown in Tenerife

Guests confined to hotel rooms complain of lack of information and fear a long wait
British tourists have been left in limbo waiting to learn their fate after the Tenerife hotel they are staying in was placed in lockdown because of coronavirus fears.

Guests were confined to their rooms after an Italian doctor who stayed at the hotel tested positive for the potentially deadly virus. Despite warnings from experts that the quarantine of passengers and staff on the Diamond Princess ship may have been counterproductive, allowing the virus to spread, tourists fear they may be in for a similarly long stay at the hotel.

Hannah Green, 27, from Hertfordshire, who is staying with her boyfriend and one-year-old son, told PA Media: “We woke up to a note under our door this morning saying for health reasons not to leave our room.

“I called downstairs to reception as soon as I saw it and they wouldn’t tell us anything. So I quickly got on my phone and googled and saw a man had tested positive for coronavirus so I basically assumed it was that.

“But since then, we’ve had nothing from the hotel – no one has told us anything or what’s going to happen.”

She said that since arriving on Saturday they had experienced a “holiday for hell”, having also been confined to the hotel on Sunday because of the sandstorm that struck the Canary Islands.

“We’re in our room with the baby,” said Green. We’re worried for the baby … I don’t think we’ll be allowed to leave. We don’t want to be here. We’re fed up now.”

The four-star H10 Costa Adeje Palace, located on the seafront, has 467 rooms, four pools and three restaurants. The quarantine meant customers missed lunch, forcing them to raid their minibars, although guests said they received food packages later in the afternoon.

Steve McHardy, 53, an estate agent from Kinross, in eastern Scotland, said he and his wife Susan, also 53, were supposed to leave on Tuesday but woke up to messages from friends who live on the island telling them of the situation. They decided to sunbathe instead but but then were told to go to their room around lunchtime, he said.

“There’s no indication of whether we’ll get out when we’ve been tested or after 14 days,” he told the Guardian. “People questioned how many doctors are coming. If there’s 1,000 people, you don’t know how long it’s going to take to be tested and how they will decide in what order people are tested.”

He praised hotel staff but said information had not been forthcoming. “We’ve got jobs and animals to go back to,” he said before adding with resignation: “It is what it is. It’s day one; if I’m here in 17 days’ time, it might be a different conversation.”

“Nobody is telling us what’s going on, how long this is going to last and who is going to feed us,” Hoon told MailOnline. “The way this has been handled is a disgrace.

“The hotel is like a ghost house and my fear is that by trapping us inside it, we stand more chance of catching the coronavirus. This whole thing is very worrying.”

A message on the hotel’s website said it would be closed until 15 March. It said it was “providing customers and hotel staff all the necessary care and attention so that, despite the inconveniences this situation may cause, they are taken care of in the best way possible”.

The hotel was locked down after an Italian doctor complained of feeling ill and tested positive for the virus on Monday. The following day, the regional government announced that his wife had also tested positive.

The Italian couple are thought to have spent six days at the four-star seafront hotel, which is used by the package holiday firms Tui and Jet2Holidays. They are believed to be from the north of Italy, where most of the country’s 283 cases have been reported.

On Tuesday afternoon, the hotel, on the outskirts of Adeje, was guarded by police officers in face masks who declined to speak to the media, and a red barrier had been erected a few hundred metres from the main entrance.

The shops, bars and restaurants inside had been sealed off, and staff who had turned up in the morning had been told to go home. A letter sent by managers to guests said they had to stay in their rooms.

“H10 Hotels has implemented all health and operational recommendations from the health authorities to ensure the safety and wellbeing of customers and employees,” the hotel said.

“Additionally, we are providing customers and hotel staff all the necessary care and attention so that, despite the inconveniences this situation may cause, they are taken care of in the best way possible.”

Another British guest told Reuters he was among those in quarantine and complained of a lack of information.

“We can see from the window there are security officers outside the hotel and about 50 hotel employees,” Christopher Betts said on the phone from his hotel room, adding that guests were asked to remain in their rooms.

Betts said they had been allowed to have breakfast in the hotel restaurant but added: “We have received no information whatsoever.” He said he had not been tested for the virus.

Ashotel, the association of hoteliers on Tenerife and four other Canary islands, called for calm and said the established protocols were in effect.

“The hotel where the affected tourist was staying is doing everything it can to deal with the situation and is demonstrating complete responsibility and following all the steps laid out in the protocol,” said a spokeswoman.

“The situation inside the hotel is normal; all the customers are being kept informed about what’s going and are cooperating fully when it comes to following the recommendations laid out by the authorities.”
Add Comment