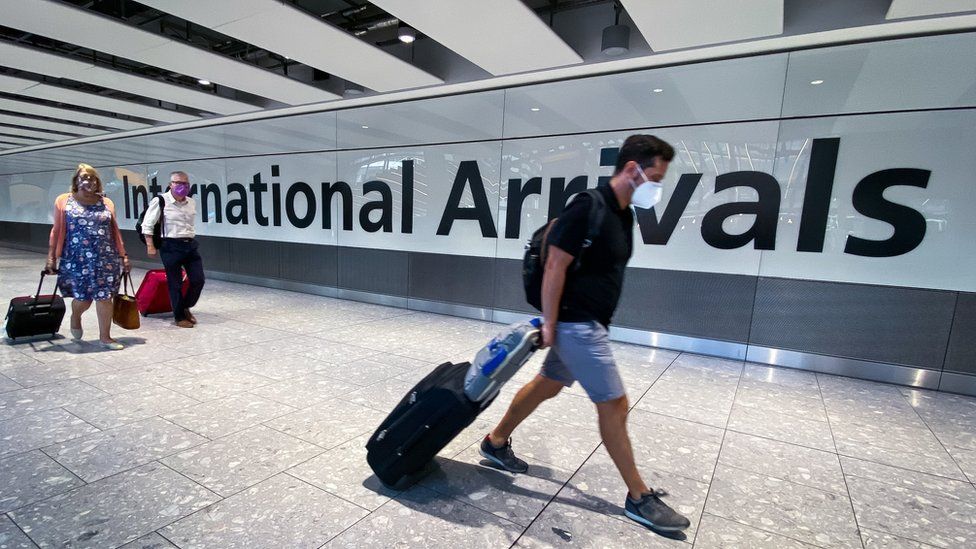 It said 2020 was the toughest year in its 75-year history and the loss "underlines the devastating impact of Covid-19 on aviation".

Heathrow's results contained a warning it may not be able to carry on if passenger numbers remain low.

However, its boss said the airport had enough money to cope until 2023.

John Holland-Kaye also told the BBC that he thought people would be likely to be able to go on their summer holidays.

Under the UK government's roadmap out of lockdown, which was published on Monday, international travel might be able to resume in mid-May.

"For the aviation sector, we can start to plan ahead for 17 May to make sure we've got the people and the planes in place so that we can get, not just people on their holidays, but also start to get British businesses moving again," he said.

The UK is in discussions with G7 countries and others as to how to allow greater foreign travel, with talks underway with some countries about a potential passport scheme.

Mr Holland-Kaye said that a digital vaccine passport and international agreements would be needed to speed up travel at airports.

Currently it takes about 20 minutes per passenger at Heathrow to sort out the necessary paperwork, which will not be feasible when passenger numbers pick up, he said.

Lockdowns and travel restrictions imposed in 2020 to try to limit the global spread of coronavirus hit the aviation sector hard.

Heathrow normally has about 80 million passengers per year, but it said numbers in 2020 dropped to 22 million, with more than half of those travelling in January and February before the coronavirus crisis took hold.

In the long-term, if passenger numbers were to drop below 27 million, Heathrow would be in danger of breaching deals it has with creditors, it said.

In January, the government opened a financial support scheme for airports in England, which included £8m per applicant to be used to cover fixed costs such as business rates.

On Wednesday, Heathrow called on Chancellor Rishi Sunak to use next week's Budget to extend the furlough scheme and give a 100% business rates holiday to give additional support to the aviation sector.

Heathrow doesn't have many passengers at the moment, but one thing it does have a lot of is borrowing.

The London airport has built a £15bn debt pile in the past decade while paying its shareholders several billion pounds in dividends.

The collapse in traffic caused by the coronavirus pandemic has understandably put a strain on its finances, to the extent that the company has asked the Civil Aviation Authority (CAA), its economic regulator, for an increase in prices to compensate.

The request has outraged its airline customers, who say they and their passengers should not have to pick up the airport's pandemic tab.

There is no danger of Heathrow running out of money in the short term - it has about £4bn in cash, enough to keep it ticking over for two years - but the accounts do include a warning about the future.

The directors say that the uncertainty about the timescale and nature of the recovery from the pandemic "indicates the existence of a material uncertainty which could cast significant doubt upon the group and the company's ability to continue as a going concern".

It would take a serious prolongation of traffic restrictions for Heathrow's current financial structure to crack - but the warning underlines why the company is pressing the CAA so hard for a price increase.

The International Air Transport Association (IATA) has also pleaded with governments to continue their financial support for the aviation sector.

The industry body warned on Wednesday that airlines could continue to burn cash into 2022 amid uncertainty around when restrictions will ease. It estimated that aviation firms burnt through $77bn (£54.6bn) in cash during the second half of 2020 alone.

Its boss Alexandre de Juniac told the BBC: "The crisis is not over.

"If you want us to be alive when the restart will come, when the traffic will recover, which is not before the second half of 2021... We need support with additional financial help."

It is currently working on a "Covid travel pass", an app which could be used to verify if a passenger has had the Covid-19 tests or vaccines required to enter a country.

The director general said in a BBC interview on Wednesday that it is talking to the UK government about using its app.

He played down concerns about the security of any app-based system: "It's pretty well done and designed for that purpose".

Mr de Juniac said the focus was on passengers controlling their data and that "there is no information that is stored in any database that the government control or IATA control at all."