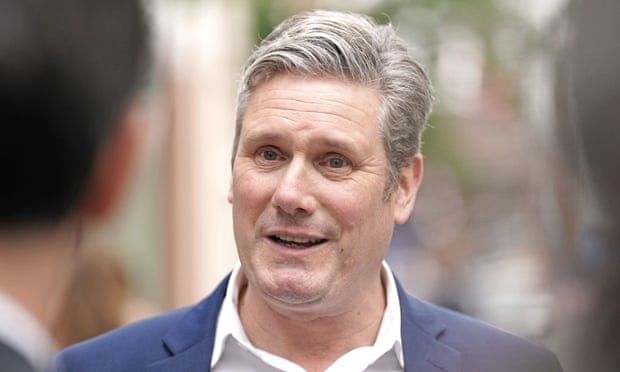 Tories claim document published in Mail on Sunday proves Labour leader is guilty of ‘rank double standards’
Labour has rejected claims that a leaked planning memo about Keir Starmer’s visit to Durham last year undermined his assertion he did not break lockdown laws, insisting he is “Mr Rules”.

The Labour document, published by the Mail on Sunday, shows that an 80-minute dinner with the Labour MP Mary Foy, featuring a takeaway curry, was planned as part of his schedule.

Starmer has repeatedly claimed that the meal, at which he was pictured drinking beer, did not break lockdown rules because he was eating in the course of work, and not attending a social event.

The announcement by Durham police on Friday that they were reopening their investigation into the event has led Tories to accuse the Labour leader of hypocrisy as he called for Boris Johnson’s resignation when police opened an investigation into lockdown breaches at No 10.

Tories argued the memo was evidence the meal was in breach of lockdown rules because it showed that it was prearranged – to take place between 8.40pm and 10pm – and not just a spontaneous decision to order food as work extended into the evening, as Starmer’s account of the evening has implied.

Starmer has also claimed that after his meal he continued working. But the leaked schedule showed that after the meal he was due to return to his hotel.

In a separate report, the Sunday Times quoted an unnamed source who was present at the gathering saying Starmer did not return to work after his meal and that Foy and her staff were not present for work purposes, but just for a drink.

“Mary Foy and her staff were not working and I have not got a problem telling that to the police. They were just getting pissed. They were just there for a jolly,” the source told the paper.

Foy said: “Me and my team were working during a very busy period. Including facilitating the leader’s visit. I do not believe either I or my office broke any rules and I will of course fully engage with any police investigation.”

In a tweet at the weekend, Nadine Dorries, the culture secretary, claimed the memo showed Labour’s account of the evening was “a lie”. Dominic Raab, the justice secretary and deputy prime minister, told Sky’s Sophy Ridge on Sunday that Starmer was guilty of “rank double standards”.

Lisa Nandy, the shadow levelling up secretary, told the same programme the leaked memo confirmed Starmer was on a work visit when he was in Durham on 30 April 2021.

She said Starmer was the victim of “an absolutely desperate attempt to sling mud” and that it was “absurd” to equate this with a prime minister under investigation for 12 separate gatherings, including “karaoke parties, bring your own bottle parties, pub quizzes [and] suitcases full of wine being smuggled through the back door”.

She added: “The prime minister lied about that … Keir Starmer went on a work visit and had a break to eat. The idea that this is the same sort of thing is just a sign of a government that is tired, and is desperate and is completely out of ideas.

“This is a guy who’s self-isolated six times during the pandemic, I don’t know a single other person who did that.

“He is Mr Rules, he does not break the rules, he was the director of public prosecutions, not somebody who goes around tearing up rules when it suits him, in stark contrast to the prime minister.”

Adam Wagner, a human rights barrister and a specialist in lockdown rules, said the Labour memo could be used to clear Starmer of allegations he broke the law.

“Seeing that this was a scheduled event as part of the leader of the opposition’s visit to Durham – during a local election campaign, an event focused on him being with a local MP and their staff, and it was in the evening and food was ordered because it was the evening – I don’t really see how it could be a breach of the regulations,” he said.

“The regulations allowed for any gathering that was reasonably necessary for work or voluntary activity. And obviously the purpose of that visit overall was for the leader of the opposition to visit the local campaigners and the local MP and that is all on the schedule.

“So the police would have to say: ‘Well we actually disagree with the Labour party’s analysis of what was reasonably necessary for the leader’s trip to Durham,’ and I am doubtful that they could really go behind that reasoning.”

Wagner said the No 10 Partygate events were quite different. “The issue with the Downing Street events was that they were prearranged social events. Those being investigated are the ones where it’s quite obvious that the purpose of the event was social – a Christmas party, a leaving party, a birthday party. Whereas the fact that this is pre-planned I think shows the opposite. It shows that the purpose was political.”
#Boris Johnson  #Dominic Raab  #Johnson  #Raab
Add Comment