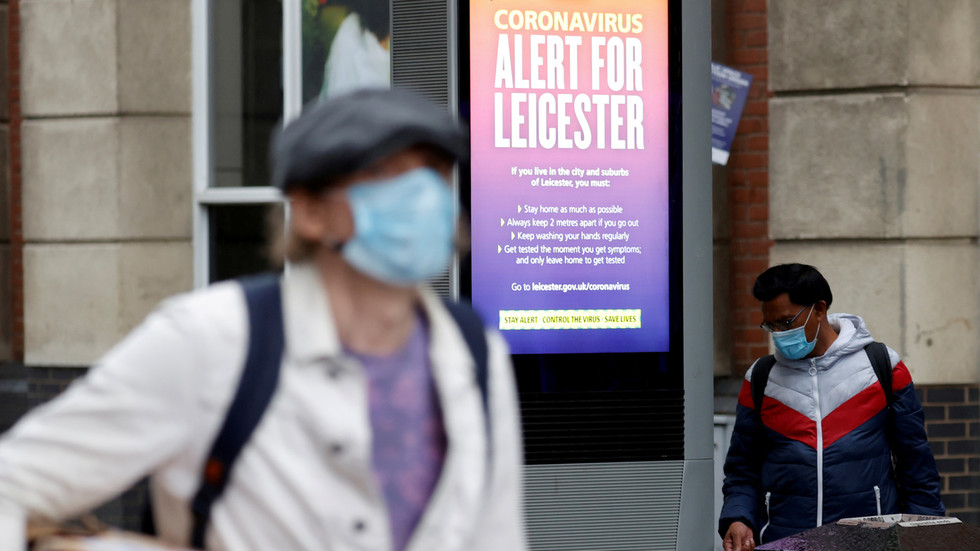 Leicester’s mayor has slammed the government’s handling of his city’s lockdown, claiming it has no clear measure of success. His criticisms come as it was revealed there are more than 100 weekly Covid-19 flare-ups nationwide.
In an interview with BBC Breakfast on Monday, Sir Peter Soulsby described a chaotic scene in regard to his dealings with the government over the local lockdown imposed on Leicester two weeks ago after an increase in coronavirus cases.

He said that, even though the city council is now receiving “useful data” from the Department of Health and Social Care, it is “the best part of two weeks out of date.”

Leicester became the first city in the UK to have restrictions reimposed, which Soulsby insists was unjustified. He has called instead for more targeted measures to be implemented to deal with smaller local outbreaks.

The mayor said that data shared with Leicester local authority showed that around 10 percent of the city had recorded a higher transmission of the deadly virus. “If we’d known that weeks ago, we could’ve actually dealt with it at the time and prevented this lockdown,” Soulsby added.

It comes after UK Health Secretary Matt Hancock revealed that councils around the country were tackling more than 100 localized Covid-19 spikes each week.

Writing in a column in the Telegraph on Sunday, Hancock insisted that these outbreaks were being “swiftly and silently” dealt with. He went on to explain that the increase in testing capacity means that officials can take a more focused approach, avoiding the need to impose national measures.

The UK has suffered a number of local flare-ups in the past few weeks, the latest being in Herefordshire. On Sunday, Public Health England and the local council announced that some 200 workers at AS Green & Co, a vegetable producer, had been quarantined, following an outbreak among staff. After 73 employees tested positive for Covid-19, all workers – who live in shared housing at Rook Row Farm – have had to be isolated together as “one extended bubble.”
#Coronavirus  #COVID-19  #Covid
Add Comment