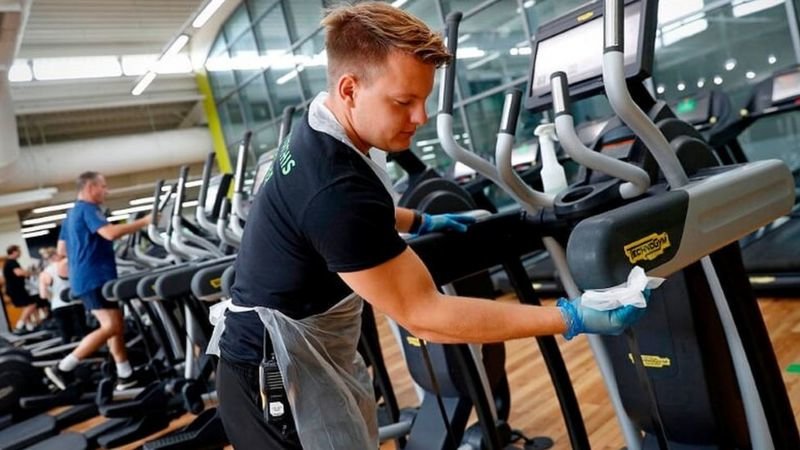 Gyms and coronavirus: What are the facts?

For the second time this year, gyms in parts of England have shut their doors.

It's not nationwide this time - only places on the "very high" tier of England's new alert system have turned off the treadmills.

But what's the science behind shutting gyms? Are they riskier places to be in a pandemic than shops and restaurants?

And how does closing them down fit with the government telling us to stay fit and look after our mental health as coronavirus cases increase?

One gym owner in Merseyside was fined £1,000 after he posted on social media that his gym would stay open "not for financial gain but more for our members' mental and physical well-being."

And gym users have been telling Newsbeat they're "baffled" by the move to close gyms while other places stay open.

What does the science tell us?

Prof Jonathan Ball is an expert in viruses from the University of Nottingham.

"You do tend to exercise quite vigorously, that means that you can breathe rapidly and quite deeply," he tells Newsbeat.

"Therefore, we would expect that you could potentially produce droplets or aerosols that could go on to infect other people."

He also points out there are lots of areas of gyms that people touch, like handles and equipment, before touching their faces. 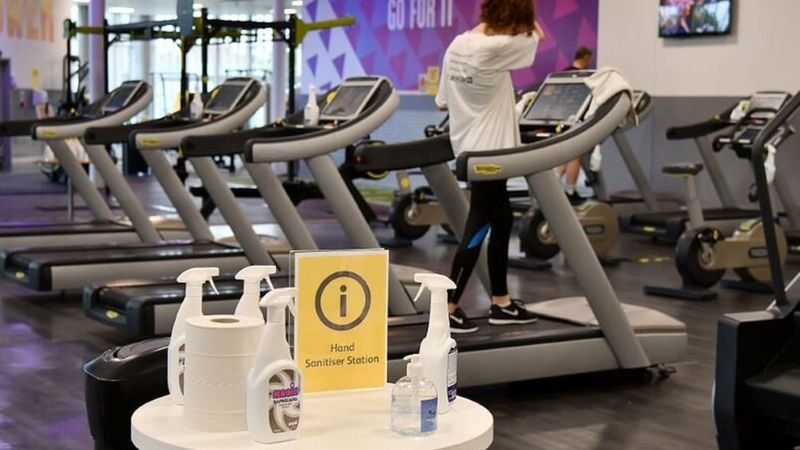 There is a but though.

Prof Ball says a lot of that risk can be dramatically lowered through things like effective air-conditioning, regular cleaning, social distancing and hand sanitising.

"From the data that I've seen from Public Health England, I'm not aware that there is a significant hotspot for infections in the gym environment.

"So if gyms do come under extra scrutiny, I think it's important for the government and for scientists to explain the data that's led to these things getting more restrictions."

He adds: "I think the government and local authorities are going to look at places that they can try and target to reduce the spread, but balance that against the economic impact.

"So we'll start to see what what, on the face of it, some might see as unfair restrictions on some activities, but other things like visits to the pub, for example, will be allowed to continue.

"There are going to be certain areas, certain activities that might be targeted, simply because there's they're not particularly increased risks over some activities.

"But the economic impacts are maybe seen as being less less damaging. But you know, that's the political decision, and it's one that might mystify many of us."

The only government data on gyms comes from Public Health England's surveillance report, which is based on data from Test and Trace.

That data puts gyms on 3%, while supermarkets are 12%, pubs and bars are 10% and secondary schools are 5%. But what those percentages mean is a bit tricky.

In the week to 11 October, 73,561 people who had tested positive for coronavirus were referred for contact tracing.

Of those, 20,776 had been somewhere in the previous seven days that at least one other person contacted had visited.

About 620 of those said they had been to the gym. We don't know if they caught it at the gym - we just know they visited the gym.

Is that a lot? It's hard to tell - you need to take into account how many people visit a gym regularly compared with, for example, a supermarket.

The point is that for the latest week, gyms came sixth on the list of common locations, ahead of people going to university, people working in care homes and people going shopping for clothes.

And the government is bound to have noticed that.

Its scientific advisory group Sage reckoned that closing indoor gyms and leisure centres could potentially reduce the R number (that's the average number of people each infected person infects) by 0.1, but stressed that estimating that was "very difficult".

What do gym users say?

"It's just a bizarre feeling in the gym. It's the same kind of consensus among everybody there."

The 28-year-old from Liverpool spoke to Newsbeat straight after his final gym session before the city's new restrictions came in.

"Everyone can't understand why gyms are closing, but other sections like retail and restaurants are allowed to be open," he says. 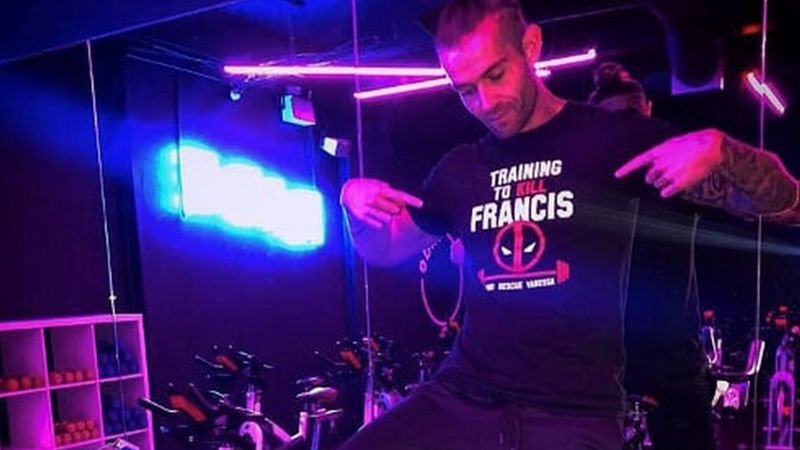 As well as working in a gym, Nathan says using them is hugely important for his physical and mental health.

"Health and fitness, physically and mentally should be a priority for the nation at the minute.

"So for the government to turn around and say that gyms are not important - I think it's giving off a ridiculous message."

Nathan says people in the gyms he trains in have followed the rules.

He lives in another area of England affected by rising cases - Nottingham.

Nottinghamshire is in Tier 2 of the restrictions - meaning gyms can still be open.

"At first I was itching to get back so I went as often as I could,"Jack says.

"You could tell that staff at the gym had put in all the measures to make you feel comfortable and were taking the situation seriously.

"But it was more the actual members that were not keeping up." 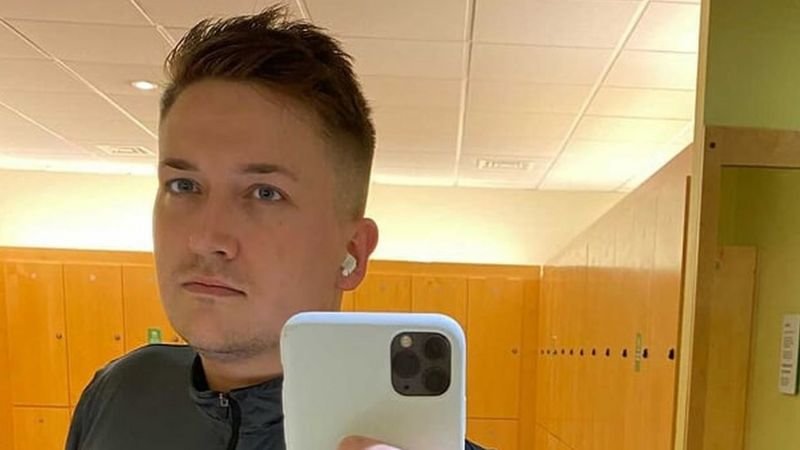 Jack from Nottingham has become more nervous about using the gym

Jack was frustrated by members not wiping down equipment after use and thinks staff should be enforcing the rules more strictly.

"I also tend to swim to help with mental health and clear my head.

"In our gym you have to book a slot. But you'd see people walk past the pool and say 'I reckon I could fit in there'." 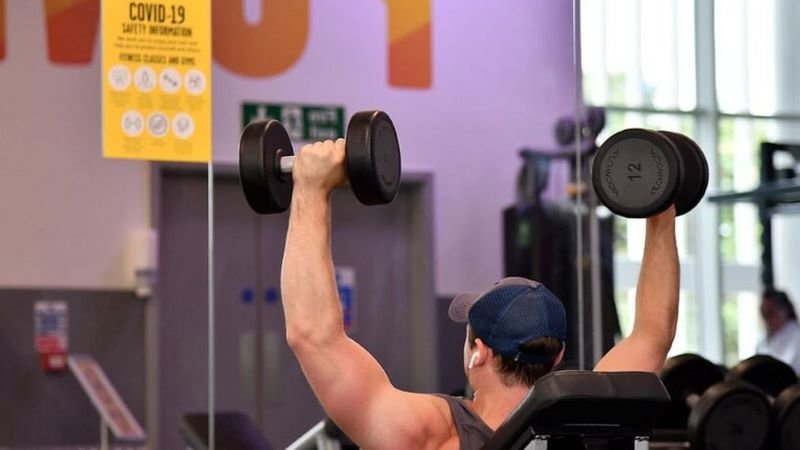