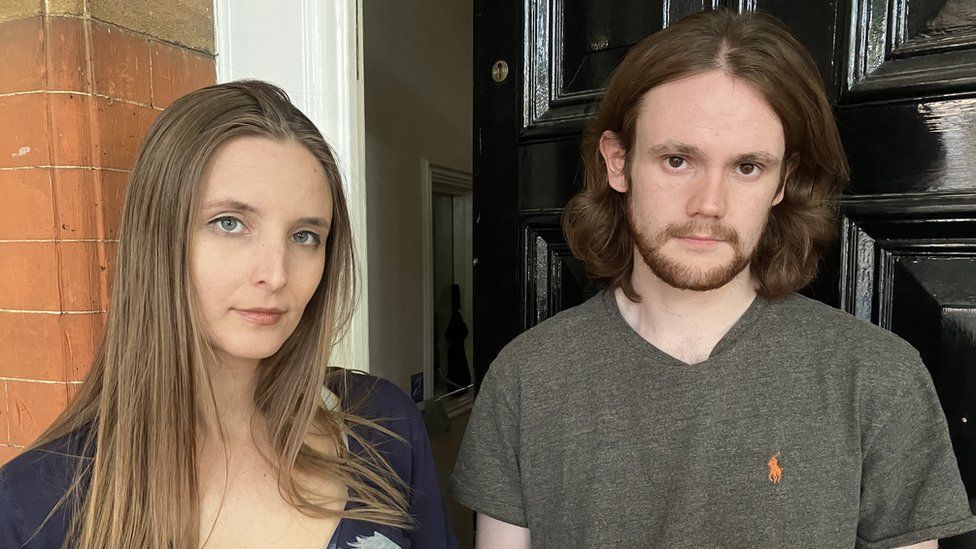 A growing share of young renters are signing new contracts that exceed 30% of their pay, according to the data - a five-year high.

Housing groups say spending more than 30% of pay on rent is unaffordable.

While London has the highest rents, affordability has worsened in towns such as Rotherham and Bolton for young people since the pandemic.

The data suggests under-30s spend more of their earnings on rent than other working age groups. The figures cover 150,000 young people and were supplied by property market consultancy Dataloft.

Megan Stephens and Richard Stranks, from London, had their rent put up from half their wages to two-thirds of them.

"We were not expecting such a big increase… that was the real punch in the gut," said Mr Stranks.

Amid rapidly rising rents and a fall in real incomes, younger people's finances are being squeezed. 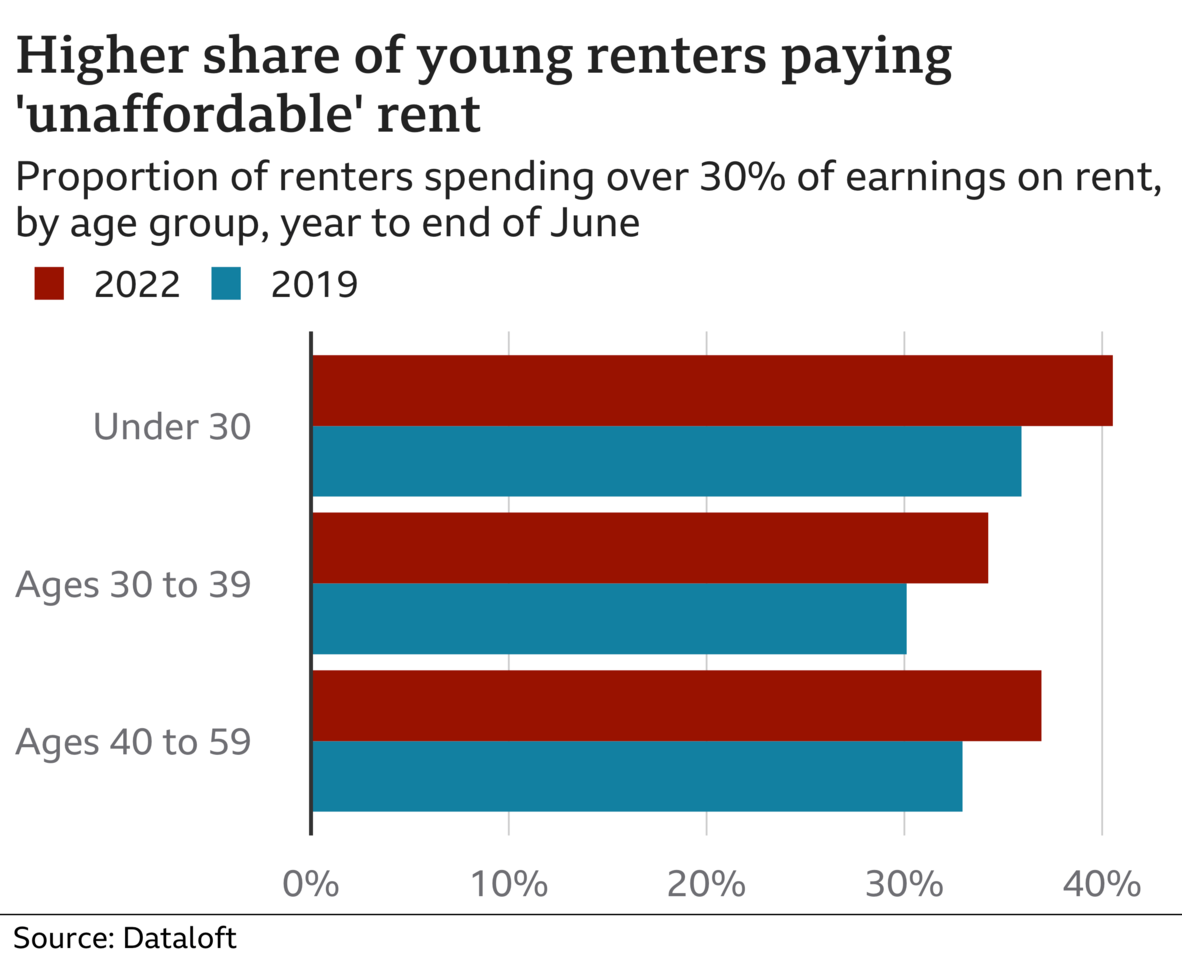 Under-30s are less likely to have dependents and are sometimes more willing to move around, so could feel able to pay higher rents, experts told the BBC.

But Nick Gallent, a professor of housing and planning at University College London, warned that young people being locked into expensive renting now could cause future problems, as "their lives evolve but they need to live with instability and insecurity".

Young renters faced a difficult winter, he said, amid rising inflation and energy bills, describing the situation as "horrendous".

"Despite all the economic problems, house prices and rents continue to nudge upwards," he said.

How do places compare?

In one in six local authorities across England, Wales and Scotland for which there was enough data, the majority of young renters were spending more than 30% of their earnings on their housing, according to analysis of Dataloft figures for the year to the end of June. 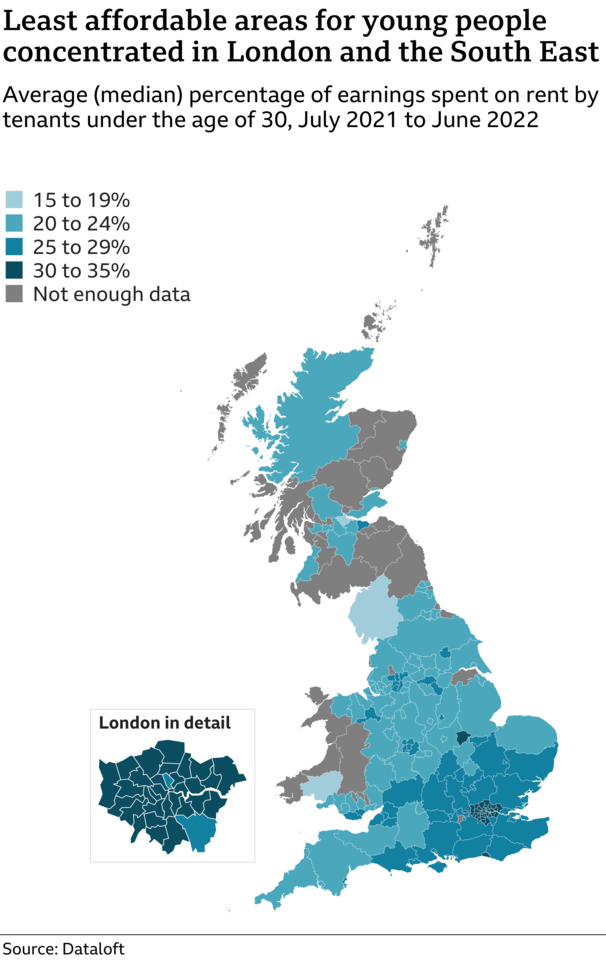 The least affordable areas for young people are concentrated in London. However, many of the places where rent affordability has dropped the most since the Covid pandemic are in towns like Rotherham, Bolton, Salford, Walsall and Dudley.

What is driving up rents?

Elton Papri, a lettings manager at a Dudley-based branch of estate agent Shipways, said under 30s were "struggling at the moment" as there were not enough homes on the market.

Renters were being pushed to offer over the asking price as people were bidding more than the listed price just to secure a property.

"They shouldn't be offering £100 more if they cannot meet that requirement, but then if they don't they are going to miss out on that property so it's a hard situation," said Mr Papri. 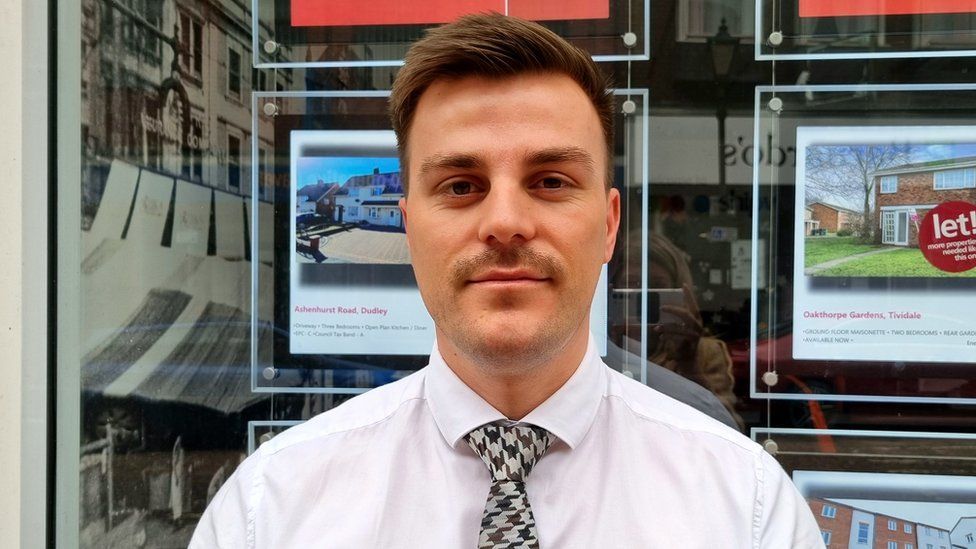 Lettings manager Elton Papri, 30, found it difficult to find somewhere to rent for himself

The trade body for estate agents, Propertymark, said rents were increasing due to fewer houses being on the market.

This was because many landlords have decided to sell properties because of rising taxes, charges and maintenance costs, it said.

"Supply shortage is not a good enough explanation because it's a long-term trend - rent as a proportion of income has been rising since the 1980s for all age groups, with younger cohorts particularly hit hard," she said.

She said housing policy reforms since the 1980s, including an end to rent controls, making evictions easier and the introduction of Right-to-Buy, had significantly shifted the balance of power from tenants to landlords.

"We also don't have alternatives and people are heavily dependent on the private rental sector, which has doubled in size since the early 2000s," she said.

London couple Ms Stephens and Mr Stranks decided to move out of their house-share last June, as they felt like they had no alternative.

"My income did grow a little bit, but not by as much as the landlord increased the price," said Ms Stephens.

They may have to move out with a month's notice, but they said the move was an easy decision.

"It means that I can save, and that's a big thing for me" says Ms Stephens.

Housing campaigners Generation Rent warned the situation for younger renters was "dire" and called for the government to freeze rents and pause evictions.

The Ministry of Housing said it recognised people were facing cost-of-living pressures and that paying rent was likely to be a tenant's biggest monthly expense.

"That is why we have taken action through our £37bn support package to help households with rising costs," it said.

The government also said that its plans announced in June would provide renters with a "fairer deal".

The proposals would ban landlords from evicting tenants in England without giving them a reason, and give renters more power to challenge unjustified rent increases and poor conditions.

More about the data

The analysis of renters under 30 years old for the year to the end of June 2022 is based on records from 150,000 tenants collected by major tenant referencing companies and aggregated by Dataloft.

It excludes income outliers, including those earning less than £10,000 because they are likely to be supported by other sources of income or by guarantors.

Across all the age groups, Dataloft has data for over 400,000 records for the year to the end of June and estimates it covers 40% of the rental market in England, Scotland and Wales.

Many housing organisations regard spending more than 30% of gross income to be unaffordable and the Office for National Statistics has also used the benchmark in its affordability analysis.