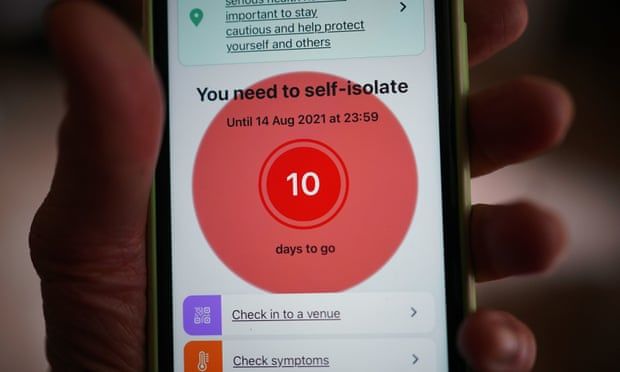 DHSC admits it has data but is blocking release, prompting speculation that figure is embarrassing
Sajid Javid’s health department has refused to reveal how many people have turned off contact tracing on the Covid app.

The government admitted it knew the number, but refused to publish it – prompting speculation ministers were embarrassed their test-and-trace system was not as “world-beating” as promised.

Some people – including Tory MPs – have reported either deleting the app or permanently turning off contact tracing, amid fears a “pingdemic” is forcing people into isolation unnecessarily.

More than 2.1m alerts telling people to self-isolate were sent during July in England alone, leading to disruption of services including public transport, bin collections and food supplies.

After initially resisting calls to change the app to decrease its sensitivity, the health secretary said the technology would be tweaked so that only people who came into contact with a positive Covid case two days before would be pinged, instead of five.

But confidence in the app already appeared to have faltered, with the number of new downloads in a week falling. According to a Savanta ComRes poll from mid-July, 19% of UK adults said they had already deleted the app and 20% that they planned to delete it.

People can also keep the app but turn off contact tracing, rendering useless the Bluetooth technology that scans nearby devices to alert users if someone they came into close contact with later tests positive.

When asked in a freedom of information request by the Guardian how many people had permanently turned off contact tracing, the Department of Health and Social Care (DHSC) admitted it did hold the relevant data. But it said the information was being “withheld” under an exemption, known as “section 22”, allowing it to publish the figure at an unspecified date.

The DHSC said it had assessed “as objectively as possible” whether it was in the public interest to release the information and that while doing so would lead to “greater transparency in government”, it had decided to block the release for now to ensure it was “made available to everyone at the same time”. It declined to give any timescale of when that would happen.

Justin Madders, a shadow health minister, said it was “typical of this government to withhold information when it’s not in their interests”. He asked: “What do they have to hide? Either the NHS app is working or their chaos, confusion and mixed messages around the app have driven people to delete it in their droves. If it’s the latter, ministers must own up to their failures and set out how they plan to get contact tracing back under control.”

Layla Moran, a Liberal Democrat MP and chair of the all-party parliamentary group on coronavirus, said it was “disappointing to see the government attempting to conceal the shortcomings of its apparent failing test-and-trace programme”.

She added: “The government must publish all data held relating to test and trace to allow for greater transparency and public scrutiny. If test and trace is still truly world beating, what have they got to hide?”

The government recently said it had no figure for the number of people who have deleted the Covid-19 app. Health minister Jo Churchill said: “We are considering what further metrics we may be able to publish about app usage.”

It comes after Downing Street said johnson">Boris Johnson has the app installed on his phone and has not been told to isolate, after an aide he flew with on a plane tested positive.

No 10 insisted the prime minister was not a “close contact” of the senior official, who the Guardian revealed was forced to isolate halfway through a trip to Scotland last week while other members of the contingent continued the tour.

Speculation had mounted over whether he may have been sent an alert in the following days given that government guidance says close contacts count as those who “travelled in the same vehicle or plane as a person who has tested positive for Covid-19”.

“The prime minister was not deemed to be a close contact following advice from public health bodies in the normal way,” Johnson’s spokesperson said on Monday.

At least six Downing Street staff are said to be isolating, with Johnson having spent the weekend at his country residence Chequers but due to return to Westminster this week.
#COVID-19  #Covid  #Coronavirus  #Boris Johnson  #Johnson
Add Comment