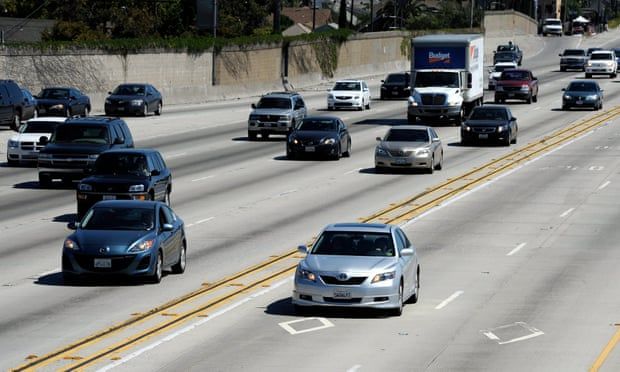 Listen to the article
0:00 / 0:00
Voice by MediaWorks
Brandy Bottone, who is 34 weeks pregnant, pulled over by police for driving in high-occupancy vehicle lane for two or more people
A pregnant woman in Texas told police that her unborn child counted as an additional passenger after being cited for driving alone in a high-occupancy vehicle (HOV) lane, offering up a potentially clever defense for motorists navigating the legal landscape following the supreme court’s striking down of nationwide abortion rights last month.

Brandy Bottone of Plano, Texas, tried to fight a ticket for driving with only one passenger in an HOV lane – which requires at least two people in the car – by arguing that her unborn baby should count as her second passenger.

“[The officer] starts peeking around. He’s like, ‘Is it just you?’ And I said, ‘No there’s two of us?’” Bottone recounted to NBC 5 Dallas-Fort Worth. “And he said, ‘Well where’s the other person?’ And I went, ‘Right here,’” pointing to her stomach.

To avoid being late to get him, Bottone took an HOV lane, but a patrol officer pulled her over while trying to exit the expressway, the Dallas Morning News first reported.

An officer approached Bottone’s car, asking where her second required passenger was. When Bottone tried to argue that her unborn baby should count as the additional rider given Texas’s abortion ban after the overturning of federal abortion protections, officers did not agree.

“One officer kind of brushed me off when I mentioned this is a living child, according to everything that’s going on with the overturning of Roe v Wade,” Bottone told the officer, referring to the landmark 1973 supreme court case that granted federal abortion rights. “‘So I don’t know why you’re not seeing that,’ I said.”

The officer told Bottone that to drive in the HOV lane, she needed her additional passenger to be outside her body.

The officer ultimately gave Bottone a $275 ticket, telling her that if she fought the citation in court, it would probably be dropped.

“This has my blood boiling. How could this be fair? According to the new law, this is a life,” Bottone said to the Morning News. “I know this may fall on deaf ears, but as a woman, this was shocking.”

Bottone was pulled over by a deputy with the Dallas county sheriff’s department, who is employed by the Texas department of transportation to enforce HOV rules on the US 75, the Morning News reported.

While the Texas penal code recognizes an unborn baby as a person, current transportation law in the state does not.

Legal experts have argued that Bottone’s argument brings up a unique, legal gray area that the courts are getting acquainted with following the rollback of Roe v wade.

“There is no Texas statute that says what to do in this situation. The Texas transportation code has not been amended recently to address this particular situation. Who knows? Maybe the legislature will in the next session.”

But Bottone said that the state should not be able to have it both ways.