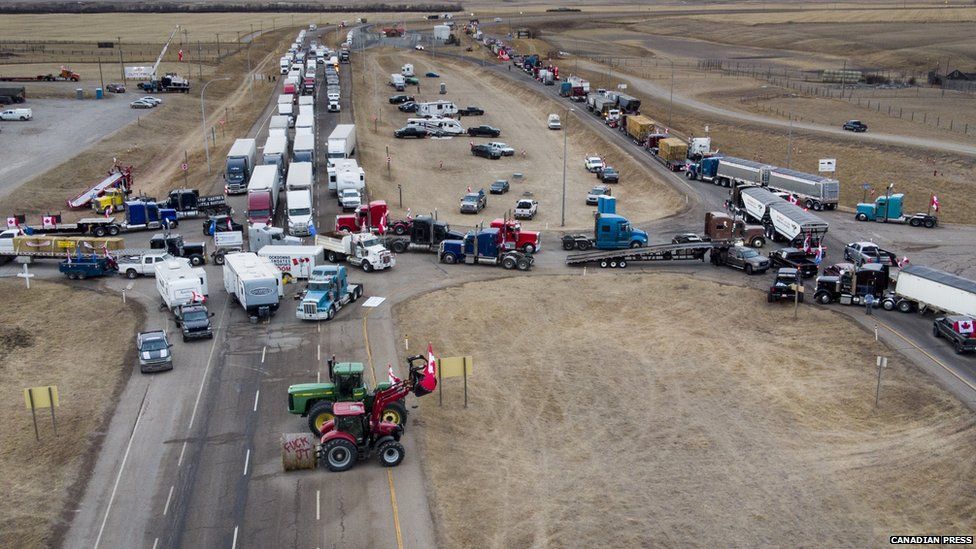 Tensions are rising at one of the US-Canada border's busiest ports of entry over a vehicle blockade that has halted traffic and disrupted services.

The demonstration is tied to the ongoing nationwide "Freedom Convoy" protests over Canada's new restrictions on unvaccinated cross-border truckers.

Some motorists and area residents have reportedly been stuck in standstill since the protest began on Saturday.

The Royal Canadian Mounted Police in Alberta said the event was "unlawful".

They said "extensive efforts" to negotiate with protest organisers had failed and the force has tapped "additional resources" to make arrests or tow trucks if needed.

"While we thought we had a path to resolve this, the protesters chose not to comply," a statement said.

The Freedom Convoy began as a call to end a federal vaccine mandate that would require unvaccinated Canadian truckers returning from across the US border to quarantine and get tested once they are home.

It has since grown into a push to end all vaccine mandates nationwide and what supporters see as government overreach of 1Covid1-19 restrictions.

But Prime Minister Justin Trudeau said he would not engage with, or cave in to, the demands of protestors. "My focus is standing with Canadians and getting through this pandemic," he said.

The line-up of trucks in Alberta extends for several miles along the main Highway 4 into the border village of Coutts.

Some 250 people live in Coutts and Mayor Jim Willett said the protest was blocking residents' access to the grocery store and the gas station, and playing havoc with mail delivery and school bus pickups.

"Once they blocked off commerce and blocked off the highway, they lost some of my sympathy because now you've gone beyond protest," he told CBC News.

Officials across the border in the US state of Montana have also reportedly turned away motorists trying to cross into Canada.

Alberta's minister of transportation Rajan Sawhney said dozens of truckers have been stranded since the weekend with little access to food or medical assistance.

"Everyone has the right to protest peacefully, but our supply chain and the livelihoods of those trying to cross the border should not suffer because of that," she wrote on Twitter, calling for "a peaceful resolution" to the blockade.

But there are few signs the protest is nearing its end. The crowd of demonstrators that spilled into the capital city of Ottawa over the weekend has thinned, but organisers have pledged to create a "logistics nightmare" for the government.

Several US public figures, from Donald Trump to Elon Musk, have endorsed the protest, and there are reports another convoy could make its way from California to Washington DC in protest of similar 1Covid1 rules for cross-border truckers in the US.

Officials are concerned about how the demonstrations will impact the economies of both countries as they continue to recover from the pandemic.

Alberta Premier Jason Kenney has called on officials from both governments "to suspend the application of the quarantine requirement for truckers" and work more closely on supply chain issues.

But Mr Kenney - who says the blockade violates the Alberta Traffic Safety Act - has also called for an immediate end to the protests, saying they have caused "significant inconvenience for lawful motorists".

He warned those involved that, under provincial law, they could face fines or jail sentences for creating unsafe conditions on the highway.

"If participants in this convoy cross the line and break the law, I expect police to take appropriate action," he said.

Oh ya 196 days ago
Were are the American truckers on the other side of the border at this crossing? If they had any balls they would be blocking up there hiway to this crossing.
View all comments (1)Add comment