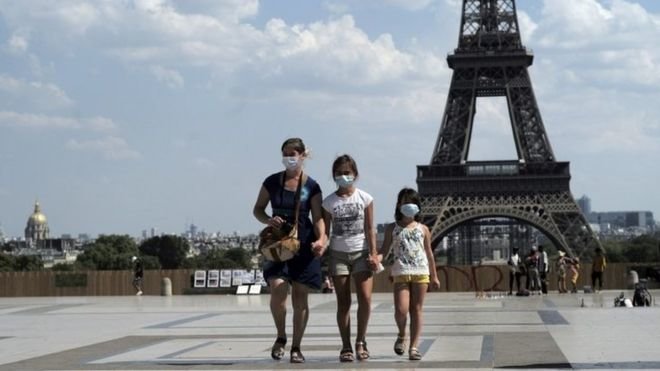 France to be added to UK quarantine countries

People coming to the UK from France and the Netherlands will be forced to quarantine for 14 days from Saturday.

Transport Secretary Grant Shapps said the measure - which also applies to people travelling from Monaco, Malta, Turks and Caicos, and Aruba - would kick in from 04:00 BST.

He added that this was necessary to keep coronavirus infections down.

The government's decision follows a surge in cases in the countries affected in recent days.

Airlines UK described it as "another devastating blow to the travel industry already reeling from the worst crisis in its history".

With up to half a million UK tourists thought to be in France at present, the deadline is expected to induce a rush to ports and airports, with thousands of tourists desperate to avoid quarantine.

The Eurotunnel website is reportedly struggling to deal with the volume of inquiries.

According to the data company Statista, people from the UK paid 10.35 million visits to France last year, putting it second behind Spain - with 18.12 million - in terms of popularity.

The Foreign Office is now warning against "all but essential travel" to France - the quarantine measure was imposed for Spain on 25 July.

The ending of more so-called "travel corridors" - allowing movement between the UK and the other countries with the need to self-isolate on return to the UK - follows a "significant change" in the risk of contracting Covid-19, the Department for Transport said.

It added that there had been a 66% increase in newly reported cases per 100,000 people in France since last Friday.

Mr Shapps said quarantine was needed because "we've absolutely work so hard to keep our numbers down here", adding: "We can't afford to re-import those cases from elsewhere."

Ahead of a government meeting on the new measures, UK Prime Minister Boris Johnson promised to be "absolutely ruthless" in deciding on rules for holidaymakers from abroad.

"We can't be remotely complacent about our own situation. Everybody understands that in a pandemic you don't allow our population to be re-infected or the disease to come back in," he added.

On Thursday, France reported 2,524 new coronavirus cases in 24 hours, the highest daily increase since its lockdown was lifted in May.

The country's Prime Minister, Jean Castex, said on Tuesday that coronavirus numbers had been going "the wrong way" for a fortnight.

Meanwhile, the government has announced that maximum fines for people in England who repeatedly refuse to wear a face covering could double to £3,200, while organisers of illegal raves could face a £10,000 penalty.

But from Sunday indoor theatre, music and performance venues will be able to reopen with socially distanced audiences.

Casinos, bowling alleys, skating rinks and soft play centres will also be allowed to resume, as will "close-contact" beauty services such as facials, eyebrow threading and eyelash treatments.