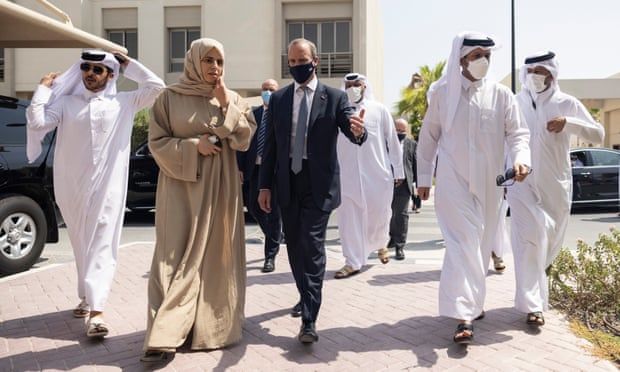 Sir Nicholas Kay says he feels shame over collapse to Taliban as he calls for lessons learned inquiry
The former UK ambassador to Afghanistan Sir Nicholas Kay has said the Foreign, Commonwealth and Development Office is playing catch-up with other countries as the Taliban assume power there, as he also became the first senior diplomat to call for a lessons learned inquiry into the collapse of the country into the hands of the militants.

Kay predicted that the UK government would have to pay countries to help transit refugees from Afghanistan to the UK.

He told BBC Radio 4’s Today programme: “I do feel shame that we as the UK, the US and Nato together have not been able to deliver on our commitments. It behoves us to be humble and to recognise that tub-thumping and chest-beating now is not right.

“There needs to be a good, long, hard look at how we lost our strategic patience to do what was necessary – that was always going to take far, far longer than 20 years to help Afghans build a nation that was sustainable and at peace with itself.”

Kay said that for Afghans to cross to neighbouring countries, a form of transit visa would be required, adding: “Those visas we hope will be granted to those who can show that they are already accepted for onward travel to the UK. That system is not in place, but it is under discussion.”

Asked if this was late, he said: “The important thing now is that the wheels are clearly turning and turning rapidly and the important thing is that the foreign secretary is out in the region engaging face to face. There is not any time to lose, and to some extent, yes, we are playing catch-up.”

He added that countries in the region would be looking for the costs to be shared by the international community.

Dominic Raab, the UK foreign secretary, flew overnight to Qatar for talks with the ruler and other officials to discuss the reopening of the civilian airport in Kabul to provide safe passage for those still trying to leave Afghanistan

Raab has been criticised in recent days for not doing enough to contact regional politicians to develop a secure route out of Afghanistan. His visit to Qatar – and later to other capitals, probably including Islamabad – will address some of that criticism.

The German foreign minister, Heiko Maas, travelled through the region at the beginning of the week. Qatar has played a central role as a mediator for years, acting as the host of talks between the US and the Taliban.

The Taliban in recent weeks have been resisting allowing forces from a third country such as Qatar or Turkey to provide security for international experts to help operate the airport. Qatar has urged Taliban leaders to recognise that international flights will not restart without foreign expertise to run Hamid Karzai airport.

The Foreign Office said Raab “was keen to work with Qatar and other international partners to help deliver our priorities: ensuring that the Taliban government will bear down on the threat from [Islamic State] and al-Qaida; facilitating humanitarian access; and protecting human rights, especially those of women and girls”.

Qatar’s foreign minister, Sheikh Mohammed bin Abdulrahman al-Thani, said earlier this week: “What is a clear Taliban objection is that they don’t want to see a foreign security presence in their territory or airport. What we are trying to explain to them is that airport safety and security require a lot more than securing the perimeter of the airport.”

He said there was no way for international airlines to fly to Kabul unless a certain security standard was met. He added he believed the Taliban wanted to show the airport could operate normally and act as a transit point for much needed humanitarian aid.

The British embassy to Afghanistan has been temporarily relocated to Qatar until it can be re-established. Raab will meet Martin Longden, who arrived in Doha on Wednesday and is temporarily in charge while the ambassador, Sir Laurie Bristow, takes time off following his efforts to shepherd thousands of Afghans out of the country.
#Dominic Raab  #Afghanistan  #Raab
Add Comment