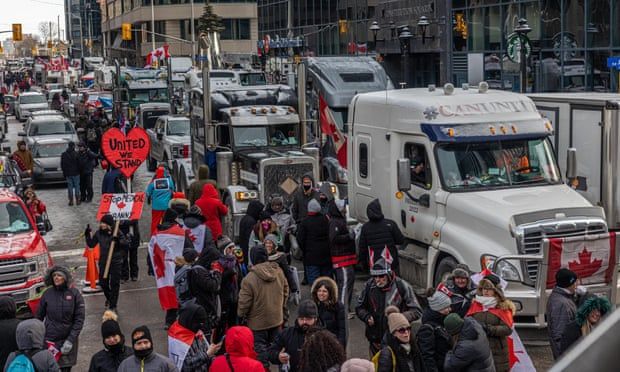 Exclusive: leak shows more than half of donations to convoy protest through GiveSendGo came from US
A hacker who leaked the names and locations of more than 90,000 people who donated money to the Canadian trucker convoy protest has said it exposed how money from abroad had funded “extremism” in the country.

In an exclusive interview, the hacker told the Guardian that Canada was “not safe from foreign political manipulation”. “You see a huge amount of money that isn’t even coming from Canada – that’s plain as day,” said the hacker, who belongs to the hacktivist group Anonymous.

The leaked data showed that more than 90,000 donations were made via GiveSendGo, with most funds appearing to come from Canada and the US. According to the data, individuals in countries including the UK, the Netherlands, Ireland and Denmark also donated.

The hacker said the sizeable number of donations coming from Canada showed that some people in the country had fallen into step with what they saw as American-style extremism.

“Up here in Canada, we kind of lied to ourselves,” the hacker said. “[We were saying] ‘It couldn’t happen here, there’s no way it could happen, we are better.’ And now people are kind of faced with the reality that no, actually, we have much more in common with our neighbours to the south than we wanted to admit to ourselves.”

The data shows that about a dozen donors used .gov email addresses in association with donations, indicating that some money came from government employees in the US. These included accounts from the US Department of Justice, the Department of Homeland Security, Nasa, the Federal Bureau of Prisons and a state transit corporation. The data also contained one Canadian government email address.

On Sunday, GiveSendGo’s web domain was redirected to a page featuring a video clip of the animated film Frozen with a message to convoy supporters. “Attention, GiveSendGo grifters and hatriots,” it read. “You helped fund the January 6 insurrection in the US, you helped fund an insurrection in Ottawa. In fact, you are committed to funding anything that keeps the raging fire of misinformation going until that [sic] it burns the world’s collective democracies down.

“On behalf of sane people worldwide who wish to continue living in a democracy, I am now telling you that GiveSendGo itself is frozen.”

On Monday, although the hackers’ message no longer appeared on the landing page of GiveSendGo, the site remained down.
Add Comment