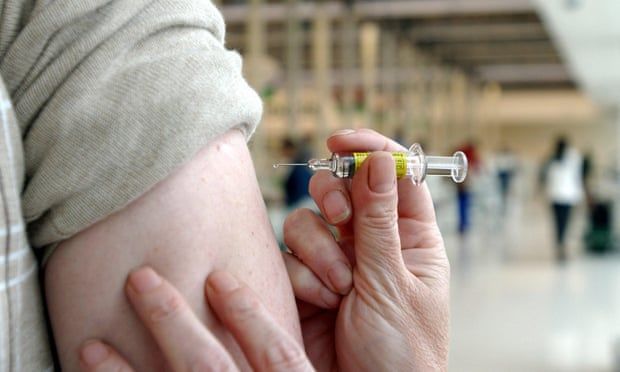 Flu and Covid jabs safe to be given at same time, study finds

Clinical trial on joint flu, Pfizer and AstraZeneca vaccinations reported only mild to moderate side-effects
Flu jabs are safe to give at the same time as the Pfizer or AstraZeneca Covid vaccines, according to the first clinical trial to investigate co-administering the shots in a single appointment.

While some people experienced more side-effects with certain combinations of flu and Covid shots, the ailments were mainly mild to moderate, the study found. The most common side effects included pain at the injection site and temporary fatigue, headache or muscle pain.

Blood tests on the trial volunteers suggest there was no negative impact on the immune responses to either flu or Covid vaccines when the shots were given one after the other, in opposite arms, though one of the flu vaccines, FluBlok by Sanofi, appeared to be more potent when given alongside the Pfizer jab.

Researchers on the Combining Influenza and Covid-19 Vaccination (ComFluCov) study said the findings supported recent advice from the Joint Committee on Vaccination and Immunisation (JCVI) to offer Covid boosters alongside flu jabs this autumn and winter, where it is practical to do so.

Dr Rajeka Lazarus, the lead scientist on the trial and a consultant in infectious diseases and microbiology at University Hospitals Bristol and Weston NHS Foundation Trust, said the results, which are preliminary and not yet peer-reviewed, were “a really positive step” that could mean fewer appointments for those eligible for boosters and flu shots.

“We don’t expect, with booster doses, that there would be an impact on how well the Covid vaccine works,” she said. The JCVI’s advice comes amid concerns that the coming flu season could be worse than in recent years because people’s immunity to influenza will have waned.

The trial, which took place across 12 NHS sites in England and Wales, looked at the side-effects and immune responses when 679 people had their second shot of Pfizer or AstraZeneca Covid vaccine in one arm followed by one of three flu vaccines in the other.

The volunteers were divided into two age groups, the under-65s and the 65s and over. At their first appointment, they received either a Covid shot and a flu shot, or a Covid shot and a placebo. The older group received the FluAd jab made by Seqirus in the UK, while the younger group had either Flublok from Sanofi or Flucelvax, also from Seqirus.

Three to four weeks later, the participants returned and had either a placebo shot or a flu vaccine, depending on which they missed at the first appointment. Two to three weeks after that, the volunteers returned again to discuss any side-effects and provide a blood sample.

About three-quarters of the volunteers reported at least one systemic side-effect, such as fatigue, regardless of whether they had the Covid shot alone or in combination with a flu shot. Among the rare reports of severe reactions was one person who was admitted to hospital with a migraine.

When asked at the end of the study, 97% of the volunteers said they would be willing to have two vaccines at the same appointment in the future. While co-administering Covid boosters and flu shots will be demanding for GPs, Dr Lazarus said it is common to receive more than one vaccine at a time, particularly in childhood and for foreign travel. The results are to be published in the Lancet magazine.
#AstraZeneca  #Vaccines  #COVID-19  #vaccine  #Pfizer  #Covid
Add Comment