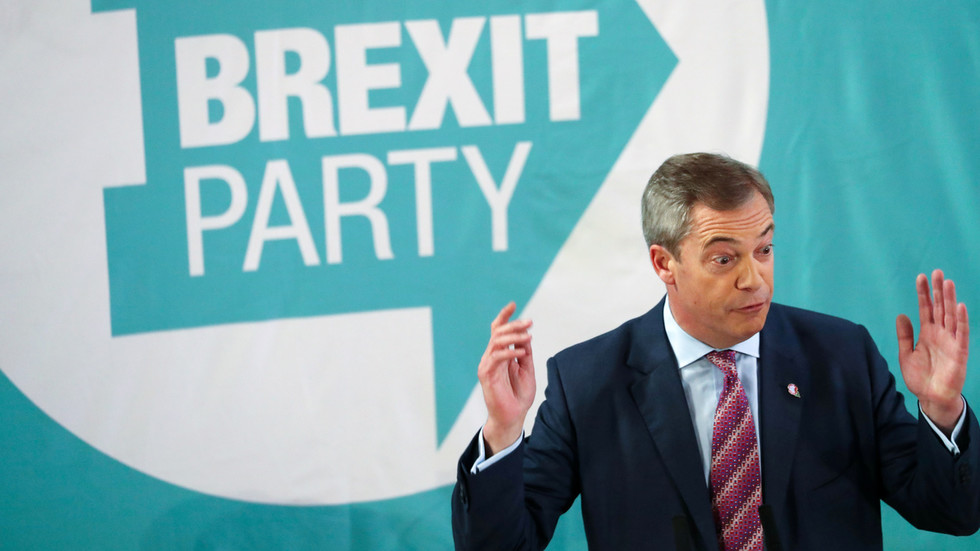 Farage accused of ‘bottling it,’ as Brexit Party leader declares his party WILL NOT fight for Tory-held seats in snap election

Nigel Farage has made a major intervention in the UK snap poll by announcing that he will not stand Brexit Party candidates in seats won by the Tories in the last election, marking a huge climbdown for the political leader.

Addressing media and Brexit Party activists in Hartlepool, north-east England, Farage explained that he had been heartened by the words of Boris Johnson on Sunday night.

In a video posted on social media, the UK PM insisted that he would not extend the Brexit transition and negotiate a super Canada-plus trade deal with no EU alignment. Farage claimed this was good enough for him to change his strategy and form an ‘unofficial’ Brexit ‘Leave alliance’ with the Conservative party.

Nigel Farage has bottled it and now morphed into the hard right Tory Party, like the PM the Brexit Party is all full of bluff and bluster. One hand Farage says PM deal is no good but then says his party won’t stand against the Tories? 🤔 Brexit Party is now the proxy Tory Party!

In October, Farage branded Johnson’s agreement with Brussels as the “worst ‘deal’ in history” and last week he promised to field 600 candidates, insisting that it was “not Brexit.”

The major U-turn now means that the Brexit Party will focus its efforts on battling Jeremy Corbyn’s Labour, who Farage says have “completely broken their manifesto in 2017” to respect the 2016 EU referendum.

The change of heart from Farage who had made a number of bold claims about how successful his party could be at the polls on December 12 has sparked much ridicule on social media. Many on Twitter have accused him of “bottling it,” including Labour’s

Shadow Education Secretary Angela Rayner who insisted that Farage had “bottled it and now morphed into the hard right Tory Party.”

The controversial leader also received a lot of praise from Brexit supporters who commended him for putting the “country first.”

The announcement may come as a great relief for many Tory MPs fighting seats with small majorities. However, it’s not clear whether the Brexit Party fighting Labour-held marginals will split the ‘Leave’ vote to benefit Corbyn’s party who are offering a second EU referendum.

Farage has bottled it. Brexit Party won’t fight seats won by the Tories in 2017.

So, a vote for the Brexit Party is a vote for Johnson and his disaster capitalist Tories.