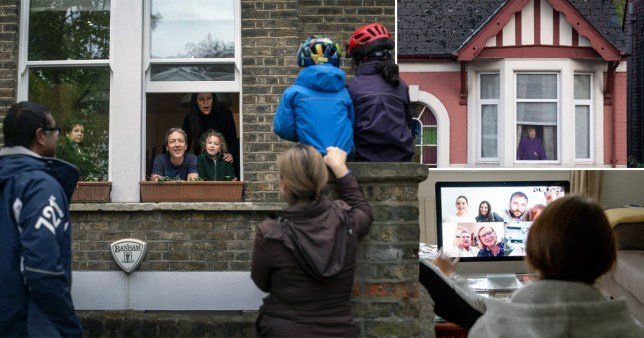 With the UK facing another six months of coronavirus restrictions, Nicola Sturgeon has warned families may have to rely on video calls to stay in touch this Christmas.

The Scottish First Minister said she wants the festive season to be ‘as normal as possible’ but said nothing is certain during such an ‘unpredictable’ and ‘volatile situation’.

Today Scotland announced a ban on meeting up in other people’s homes, which comes into effect from Wednesday.

Meanwhile in Westminster, Boris Johnson announced a 10pm curfew for pubs and restaurants, increased fines for those breaking the ‘rule of six’ on social gatherings and a U-turn on the Government’s ‘go back to work’ message.

As she tried to reassure the Scottish public at yesterday’s daily press briefing, Sturgeon said: ‘I understand people’s anxiety. This is an anxious time we’re all living through.

‘It’s having an impact on people’s mental wellbeing, on almost every aspect of our lives.

‘We don’t know everything about it but we know more about the virus than we did in March.


‘It won’t last forever, which is something I think we all have to remember. This will pass.’

She added: ‘This is tough for all of us. Humanity has faced much, much worse in the past without all of the things that help make this a little bit easier.

‘I don’t like war analogies around this. It’s very, very different. But back in the days of the Second World War, families were separated for a long, long time - several Christmases, not just one.

‘People didn’t have Zoom and Facetime and the ways of keeping in touch, even with physical separation.

‘This is not easy but humanity is resilient and we will get through this. It won’t last forever if we all keep doing the right things.’

When asked if Scots should expect a different kind of festive celebration this year, Sturgeon said she did not want to ‘make definitive predictions about Christmas’.

She noted people of other faiths have already had some of their celebrations curtailed because of coronavirus.

The First Minister added: ‘Our Muslim community has already gone through Eid without being able to celebrate properly.

‘Some people in our country have already had these very difficult periods of important celebrations that they have not been able to enjoy.

‘But Christmas really matters to people and we want it to be as normal as possible.

‘But we are in a global pandemic and if I was to stand here right now and say categorically that certain things could or couldn’t happen at Christmas I wouldn’t be being fair to people.

‘The only thing I can say with I suppose even a smidgeon of certainty right now is that the more we collectively work together to bring it under control right now, perhaps the more prospect there will be of having some greater degree of normality by Christmas. But even that is a statement that is shrouded in some caveats.’

Dashing hopes of a return to normality by December, Boris Johnson said a new set of restrictions are likely to be in place for at least six months in a bid to get the level of infections down.

Yesterday scientists have warned cases are doubling and could reach 50,000 per day by mid-October if the Government stayed on the same trajectory.