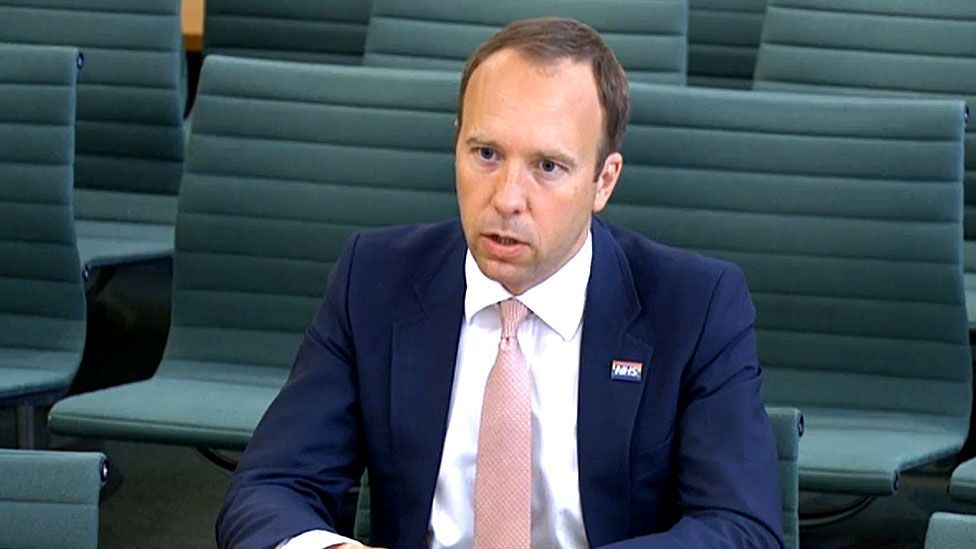 Health Secretary Matt Hancock spent more than four hours being questioned by MPs about the government's response to the Covid pandemic.

His evidence came two weeks after the prime minister's former adviser Dominic Cummings made a series of allegations - we've looked at several of the points Mr Hancock made at the latest hearing.

Mr Hancock cited a report from the National Audit Office (NAO) to support this claim.

The report says: "The NHS provider organisations we spoke to told us that, while they were concerned about the low stocks of PPE, they were always able to get what they needed in time."

But the next sentence says: "However, this was not the experience reported by many front-line workers." 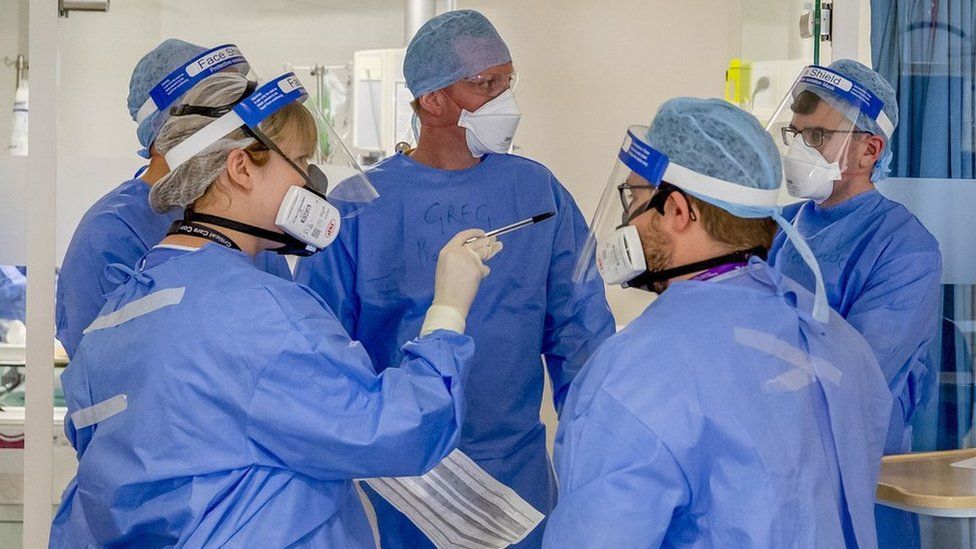 It cites surveys by bodies such as the Royal College of Nursing (in April and May 2020) showing that a "significant proportion of participating care workers, doctors and nurses reported having insufficient PPE, even in high-risk settings".

It adds that "government structures were overwhelmed in March 2020" and that while the government did then set up structures to obtain PPE, that "it took a long time for it to receive the large volumes of PPE ordered".

There was also guidance issued by the government in April 2020 (and since withdrawn) telling front-line staff what they should do to cope with "acute shortages" of PPE.

"1.6% of the transmission into care homes came through this route [from hospital discharges]"

Mr Hancock was asked whether failing to test people who were discharged from hospital into care homes early in the first wave, had contributed to the spread of coronavirus there.

However, this estimate comes with some major caveats. It is based on positive tests of care home residents but we know that, early on in the pandemic, testing in these settings was limited.

So, the analysis misses people who spread the virus but hadn't been tested because they didn't show symptoms, or because there weren't enough tests available.

It also misses outbreaks triggered when someone passed it on to a care worker who then did a shift in another home and took the virus there.

As Mr Hancock explained, discharges may not have been the main source of care home spread.

There were far fewer hospital discharges going into care homes each day than there were staff or visitors, each of whom could have brought in the virus.

But Science and Technology Committee chairman Greg Clark told Mr Hancock it is a "stretch of the imagination" to say that the figure is as low as 1.6%, when the data can't properly spot all the seeding events. 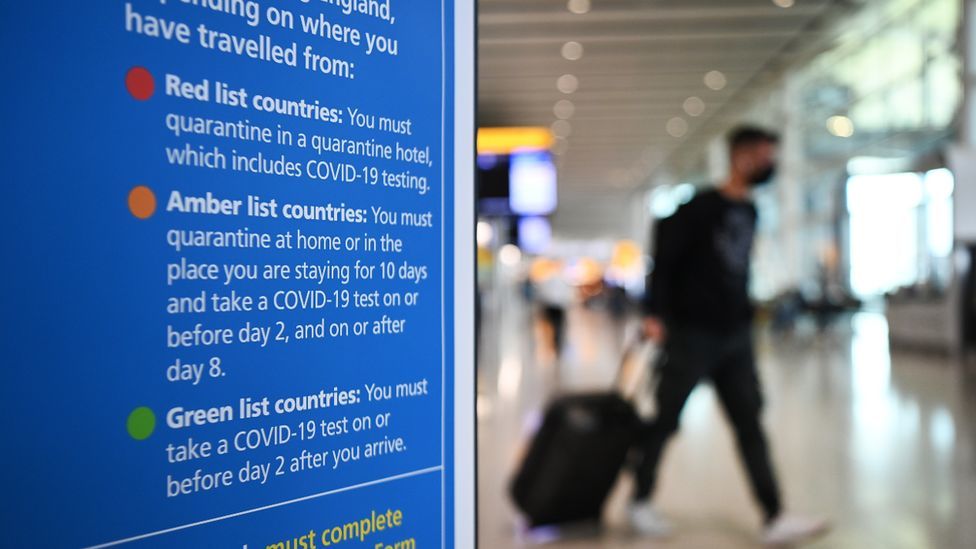 "On borders, the position we took was based not just on World Health Organization [WHO] advice but on their international health regulations"

In February 2020, the WHO advised that: "Travel bans to affected areas or denial of entry to passengers coming from affected areas are usually not effective in preventing the importation of cases, but may have a significant economic and social impact."

This was a recommendation - so non-binding - rather than part of the international health regulations. And a number of countries chose not to follow it.

Australia, New Zealand and India almost entirely closed their borders - and it has been noted that they were comparatively well protected during the first wave of Covid. Other countries brought in much more stringent restrictions than the UK, banning entry to all but their citizens or residents, including Singapore, Vietnam, Israel, the Philippines, Taiwan and Argentina.

Between January and March 2020, the UK introduced some measures including imposing quarantine on 273 people travelling from Wuhan in China.

Others from "high-risk countries" including China, Iran and northern Italy were asked to voluntarily isolate for 14 days (though the self-isolation requirements were withdrawn on 13 March).

One study found the virus was introduced to the UK "well over 1,000 times in early 2020", with a third of transmission chains brought in from Spain, followed by 29% from France, neither of which faced any restrictions. China accounted for just 0.4% of imported cases.

The UK strengthened its border policy earlier this year. 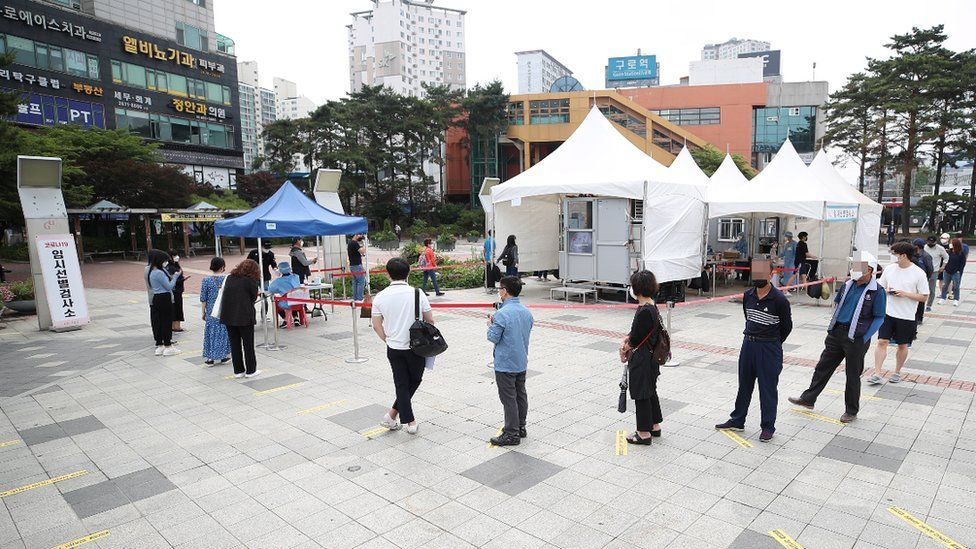 Mr Hancock's claim was interrupted by the former health secretary, Jeremy Hunt, who said that South Korea had not had a lockdown.

It's true that South Korea did not implement a national lockdown, but managed to control transmissions by rapidly developing a "test, trace and treat" system.

From 20 February 2020, all symptomatic people were tested, as well as their close contacts (regardless of whether or not they had symptoms).

Mass testing was also used in high-risk facilities such as hospitals and care homes, from mid-March. All confirmed cases were either isolated in a hospital, at home, or in a residential treatment centre.

South Korea implemented some lockdown measures including moving schools to remote learning in late February 2020 (they gradually reopened in May) and, in a region with a high rate of infections, asking people to refrain from leaving their homes for at least two weeks.

South Korea has had a much lower death rate than the UK - 39 confirmed deaths per one million people compared with 1,887 in the UK, according to Our World in Data.