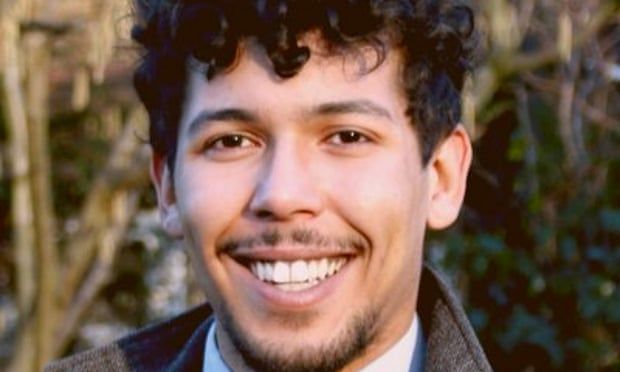 A former Conservative councillor who was thrown out of the party and now heads an anti-vax group peddling a range of conspiracy theories was among a mob that harangued Keir Starmer before the Labour leader was whisked away by police.

As experts warned of a dangerous risk of extremism from a radicalised hard core as the pandemic wanes, the incident has focused attention on the rise of a plethora of protest groups.

Coleshill, who was initially suspended from the Tory party, was last year filmed chasing Michael Gove through Whitehall, and has also confronted the Labour MP Jess Phillips and the BBC journalist Nick Watt.

Members of social media channels run by Resistance GB, a self-styled journalism platform, continue to disseminate debunked conspiracy theories about the role of Starmer in protecting paedophiles such as Jimmy Savile – alongside other claims about the coronavirus pandemic and vaccines.

After the incident involving the Labour leader – where a man and a woman were arrested for assault after a traffic cone was thrown at a police officer – users of the same social media channels expressed their belief that the confrontation had been “staged”.

Other comments included descriptions of Starmer as a traitor and a “controlled Zionist”. Under a video of the incident, another said: “They are all scum. Going to need more than a few goons as personal protection if things get any worse.”

Footage of the incident, bearing the Resistance GB logo, is being shared widely across anti-vaccine social media networks and beyond. The most popular post on Telegram, a social media platform favoured by many far-right activists, was shared by the rightwing media outlet Unity News Network. It had garnered 90,000 views less than 24 hours after Starmer was targeted outside parliament.

It was shared by a number of prominent anti-vax figures including Kate Shemirani, a former nurse who was struck off the register last year, and Mike Yeadon, a former Pfizer employee who has spread misinformation about Covid-19.

A further post from Yeadon’s Telegram channel, which claimed the incident was “set up theatre”, has received 10,000 views. The post appears to be a reference to “false flag” or “crisis actor” narratives, in which it is claimed protesters are paid actors trying to discredit a cause.

Before his expulsion from the Conservative party, Coleshill was pictured in a selfie on one occasion campaigning with Boris Johnson.

Clare De Silva, a Conservative councillor in the same Enfield ward that Coleshill once represented, claimed her one-time party colleague had been expelled “very early on” after his first or second council meeting. He had then sat as an independent for a time before being thrown out for non-attendance last summer.

“He clearly had views that were not representative of the Conservative party and was not around for very long. Conspiracy theories are something which have unfortunately got to a lot of people,” she said.

Much of Coleshill’s output makes it way on to Resistance GB’s YouTube channel, which has more than 72,000 subscribers. Interviews conducted in the wake of Coleshill’s pursuit of Gove include chats with anti-lockdown street protesters, who accuse ministers of treason and leaving “the people” with “only one option”.

“If we was really as angry as these people think we are we would have strung him up by the closest tree … To think that is going to happen today, it isn’t, but if we continue going down this path of vaccinating children then these people are going to start to get angry … it’s the only way it’s going to end up,” said one.

Experts at organisations such as Hope Not Hate said there was an overlap between many of those involved in the same groups and support for the far right, far left and conspiracy theorist movements such as QAnon.

Gregory Davis, a researcher at Hope Not Hate, said that the anti-vaccine, anti-lockdown movement had been fuelled by fears of universal vaccine mandates and perpetual lockdown, neither of which had materialised.

Davis added: “But as less-motivated activists begin to drift away the worry is that existing groups become more extreme with only the most committed and radicalised members remaining active.

“Conspiracy theories have long been around in the UK – whether it’s David Icke or others making dark predictions – but there is now a new level of expectation and mobilisation that we have not seen in the past. People are emotionally invested in this activism in a way and on a scale that was not there before.”

A Resistance GB spokesperson said: “Our news outlet is on the frontline of debunking government and mainstream media misinformation and disinformation, such as that promoted by the Guardian.

“It is nonsensical and alien to the concept of personal responsibility for us to be blamed for any of the tens of thousands of comments hosted by tech platforms.”