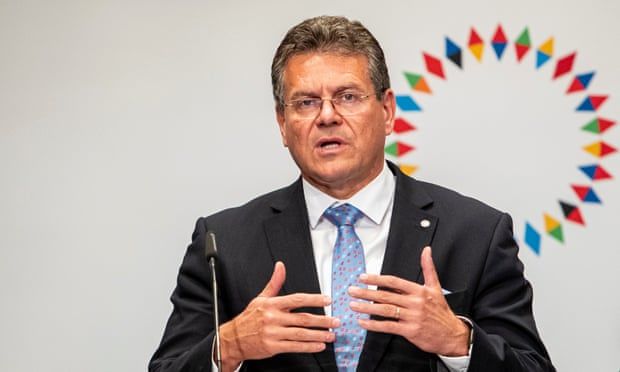 European Commission vice-president, Maroš Šefčovič, says it is ‘legally and politically inconceivable’
The EU has warned the incoming British prime minister, likely to be Liz Truss, that any unilateral action to scrap part of the Brexit deal is legally and politically of “great concern” across the continent.

The warning by the European Commission vice-president, Maroš Šefčovič, comes just days before the new prime minister is expected to confirm they will press ahead with new laws to dismantle the arrangements for Northern Ireland.

Truss and Sunak have both committed to carrying through with the Northern Ireland protocol bill in their leadership campaigns, despite the threat of a retaliatory trade war with the EU.

“The unilateral action is naturally of great concern,” Šefčovič told an audience that included invited ministers from the British and Irish governments.

“It is not for the UK government alone to change our bilateral agreement and modify the conditions under which goods can enter the EU’s single market and reach our consumers.”

He added: “This is simply legally and politically inconceivable. The clear breach of international law is extremely damaging to mutual trust and respect between the EU and the UK.”

The Northern Ireland secretary, Shailesh Vara, indicated on Friday that there would be no pulling back.

He told the British Irish Association in Oxford, where Šefčovič was speaking, that the UK was “determined” to find a solution through “negotiation and agreement” but “with legislation if we cannot”.

The laws would act as “an insurance policy so that we can ensure we have a way of resolving the issues with the protocol”, he said. “Like all insurance policies, they are better if they’re not invoked, but we must bring about a resolution.”

Šefčovič said the two agreements the UK has with the EU were founded on “trust” and depended on “legally binding commitments being respected”.

“There are no two ways about this,” he said, adding that a unilateral move would send a signal to the rest of the world that the UK leadership is not interested in cooperation with the EU at a precarious time of war and a cost of living crisis.

He also put forward a counter-narrative to Truss, who claimed earlier this year that the UK had no option but to take unilateral action because talks over 18 months had come to nothing.

Šefčovič said the UK had failed to engage with proposals the EU made in October or the prospect of further compromises beyond those plans. “In short they were dismissed without consideration. The UK has not even engaged in any meaningful discussions with us since February,” he said.

“They are not a ‘take it or leave it’ offer,” he added, but the proposals “have however never been seriously picked up by my counterparts.”.

Šefčovič said the talks had been paused in February after Russia’s invasion of Ukraine and, instead of resuming, the UK took unilateral action. And he reminded the audience that some of what Brussels proposed addresses the UK concerns but they have not been discussed seriously.

These include the “express lane” or “green lane” in Truss’s demands, for goods destined for the Republic of Ireland, and an 80% reduction in checks on farm produce and plants and a 50% reduction in customs checks.

He said the EU had been calling on the UK government to engage with Brussels on the issues in Northern Ireland for “over a year” and that request still stands for the new prime minister.

The protocol, which required checks on goods going from Great Britain to Northern Ireland, was designed to avoid a border on the island of Ireland as a quick way of Boris Johnson delivering Brexit.

But it is deeply opposed by Conservative Eurosceptics and the unionist community, and has led to a paralysis in power-sharing at the Stormont assembly.

The recently deceased David Trimble had said the protocol “rips the heart” out of the Good Friday agreement.
#Boris Johnson  #Johnson
Add Comment