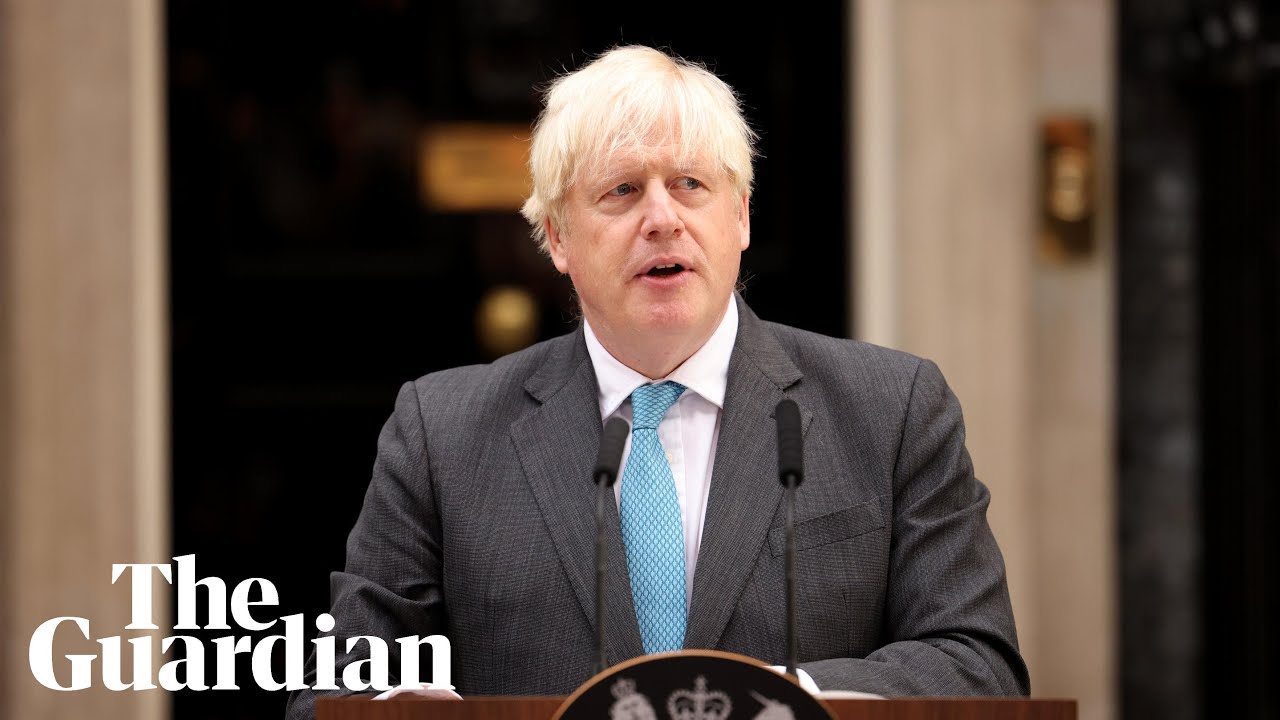 From the Covid vaccine rollout to his stance against Russia, outgoing PM was keen to cement his legacy

Boris Johnson delivered what may or may not be his final speech outside Downing Street on Tuesday.

Here we take a look at the speech, its context and what the outgoing prime minister may have meant:

“The baton will be handed over in what has unexpectedly turned out to be a relay race. They changed the rules halfway through but never mind that now.”

A note of bitterness kicked off Johnson’s speech with this jibe about rules being changed “halfway through”, of which in fairness to the outgoing PM he has a keen understanding, having unlawfully shut down parliament for five weeks at the height of the Brexit crisis in order to get his own way.

“The people who got Brexit done, the people who delivered the fastest vaccine rollout in Europe – and never forget 70% of the entire population got a dose within six months, faster than any comparable country.”

Like Arnold Schwarzenegger’s Terminator giving a thumbs up as he slides into molten steel, Johnson painted a bright picture of the country he is leaving behind. Many commentators denounced this appraisal as deluded.

When Johnson was up against the ropes during the Partygate scandal, he took to repeating the vaccine mantra at every opportunity, capitalising on what many do see as a success story – the Covid vaccine programme in the UK.

And since he announced he would step down, he has repeatedly tried to wedge in what he perceives to be his strong record in office – throwing in his support for Ukraine and the post-pandemic economic recovery for good measure.

“And if Putin thinks he can succeed by blackmailing or bullying the British people then he is utterly deluded.”

It’s become a cliche to reference Johnson’s admiration of Winston Churchill. In recent weeks, it’s been noted that Churchill led as prime minister in two separate stints, six years apart, and perhaps Johnson will emulate his hero once again and attempt a comeback.

But here we have another Churchillian performance, Johnson reminding the country that he took one of the toughest stances in the west against the Russian president Vladimir Putin’s invasion of Ukraine. It was perhaps also a final nod to the Ukrainian president Volodymyr Zelenskiy, with whom Johnson is said to have a strong relationship.

This was the moment in the speech where the various factcheck teams across the country called their friends and families and cancelled plans for the rest of the day.

On 40 new hospitals being built by the end of the decade, the BBC Reality Check team has already pointed out that Johnson’s government’s definition of a new hospital includes new wings of existing hospitals and refurbished hospitals – and that of the 40 projects, only three were entirely new hospitals.

He boasted that access to gigabit broadband had increased from 7% to 70% during his tenure, a claim challenged by tech experts. He celebrated the delivery of unfinished high-speed railway networks and lauded the recruitment of 50,000 nurses, a claim rejected by health professionals.

This show of misleading swagger perhaps reflects one of Johnson’s greatest weaknesses – his reputation as a liar, perhaps cemented by his consistent rejections of wrongdoing during the Partygate scandal. Many have highlighted this, but perhaps none so well as the former Countdown host Carol Vorderman:

“And not just using more of our own domestic hydrocarbons, but going up by 2030 to 50 gigawatts of wind power …”

This may have been the only explicit pop at his successor. Johnson has been pushing a green agenda of sorts (though many have argued it is nowhere near enough to tackle the climate emergency) but Liz Truss has already signalled she intends to lift the moratorium in the UK on fracking for gas and grant licences for North Sea oil drilling. Johnson is said to be opposed to this route, least of all because it won’t deliver any resource for energy for up to 10 years, according to some experts.

“On the subject of bouncing around and future careers, let me say that I am now like one of those booster rockets that has fulfilled its function, and I will now be gently re-entering the atmosphere and splashing down invisibly in some remote and obscure corner of the Pacific.”

Or perhaps on the obscure Caribbean island of Mustique, where he enjoyed a £15k holiday arranged by the major Tory donor David Ross.

Or perhaps Greece or Slovenia, where he holidayed this summer as households grew increasingly sick at the prospects of their energy bills increasing.

“Like Cincinnatus, I am returning to my plough. And I will be offering this government nothing but the most fervent support.”

So this was the not so cryptic comeback clue. In a great opportunity for journalists to pretend they have detailed knowledge of the Classics rather than a depressingly adept ability to use Wikipedia, Johnson likened himself to Cincinnatus, a Roman statesman, who did indeed leave Rome to toil on his farm – but then returned when summoned to lead as dictator and defend the empire from a people’s rebellion.

It also emerged quickly that it’s not the first time he’s used this analogy, having referenced Cincinnatus when he was mayor of London and asked if he would run for PM. His jokes are as old as the classical histories they are based on.

“Thank you to everybody behind me in this building.”

It was fitting that he singled out “this building”, No 10 Downing Street, the scene of many, many breaches of coronavirus legislation, including parties he attended, which in part contributed to his downfall. One last defiant shrug of the shoulders for a prime minister who, to the last, struggled with contrition.