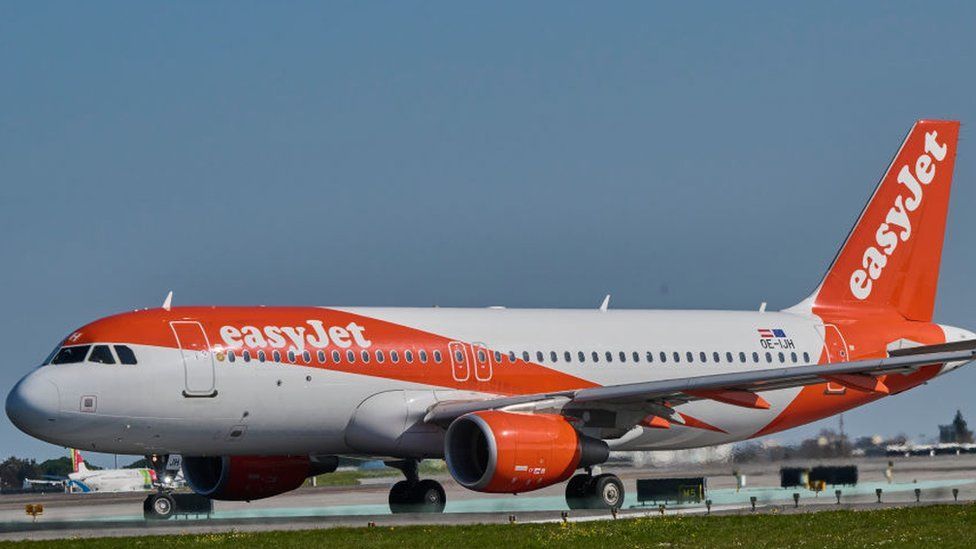 EasyJet has cancelled around 100 flights on Monday, including 62 from the UK, blaming higher than usual levels of staff absence due to Covid.

The airline said it had tried to offset the problem by using standby crew but was forced "to make some cancellations in advance".

It comes amid rising demand for travel as the Easter school holidays begin.

Airports are also struggling with staff shortages that have led to long queues for security and check-in.

EasyJet, one of Europe's biggest airlines, said the cancellations were a small part of its schedule on Monday, which is around 1,645 flights.

"As a result of the current high rates of Covid infections across Europe, like all businesses, easyJet is experiencing higher than usual levels of employee sickness," a spokesman said.

"Unfortunately it has been necessary to make some additional cancellations for today and tomorrow. We are sorry for any inconvenience this may cause."

He said affected customers had been contacted and could rebook on alternative flights or receive a voucher or refund.

Airports have also seen staff shortages at time when demand for travel is picking up following the end of travel restrictions.

Passengers at Manchester Airport have faced long queues for check-in and security, leading some to miss their flights at the start of the Easter holidays.

There have also been complaints about extensive waits in the baggage reclaim halls.

On Sunday, traveller Donna Mayfield told the BBC the situation was "horrendous", while another said they had seen "customers and staff in tears".

Manchester Airport apologised and admitted passengers' experiences fell "below the standard we aim to provide".

"Our whole industry is facing staff shortages and recruitment challenges at present, after the most damaging two years in its history," a spokesperson said.

"The removal of all travel restrictions after two years, coupled with the start of the summer travel season, has seen a rapid increase in passenger numbers, which is putting an enormous strain on our operation."

But there were also reports of staff shortages and problems with the e-gate passport checks, with some travellers saying they had waited hours to take off.

"Our teams are supporting our airline partners to get passengers away on their journeys as quickly as possible and we apologise for any inconvenience this has caused," a spokesperson said.

Gatwick told the BBC it was also having a busy weekend as the Easter holidays kicked off.

It said it has not seen big queues in its security area but that some check-in areas run by individual airlines were very busy.