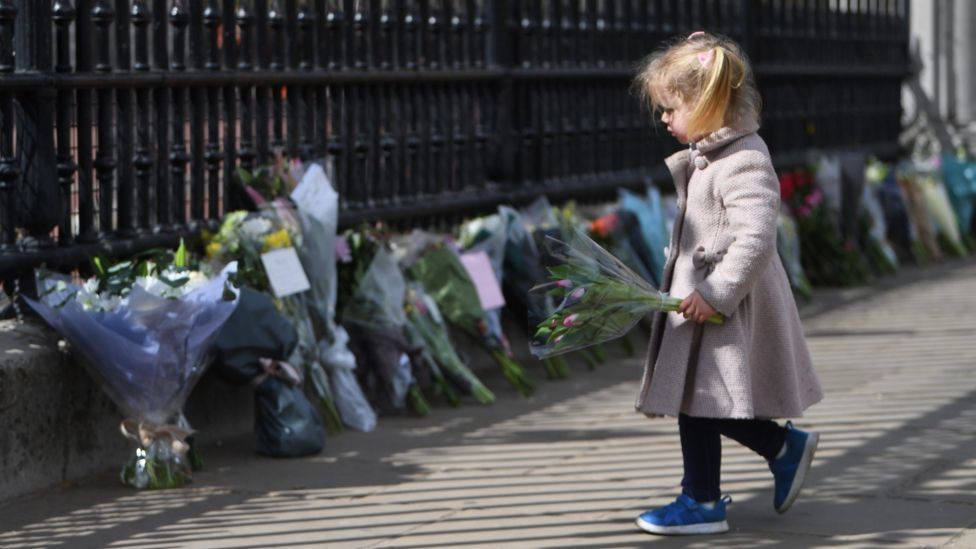 Dozens of bouquets were laid outside Buckingham Palace after Prince Philip's death was announced at midday.

Royal household staff placed a framed notice announcing the duke's death on the front gates of the Palace.

But it was removed after an hour to avoid gatherings amid ongoing Covid pandemic restrictions.

The Royal Family asked members of the public to consider making a donation to charity instead of leaving floral tributes in memory of Prince Philip.

The government has urged people not to gather at Buckingham Palace or Windsor Castle in breach of coronavirus regulations.

The Palace launched an online book of condolence on its official website where it encouraged people to leave messages, a selection of which will be passed to members of the Royal Family.

More than 100 floral tributes - ranging from bunches of daffodils to fuller bouquets, many with notes attached - and two union jacks were placed at the gates by mourners.

Stewards attempted to form an orderly queuing system but encouraged people not to form a large crowd.

Mounted police reminded those gathered to adhere to social-distancing guidelines and remain two-metres apart from other groups. 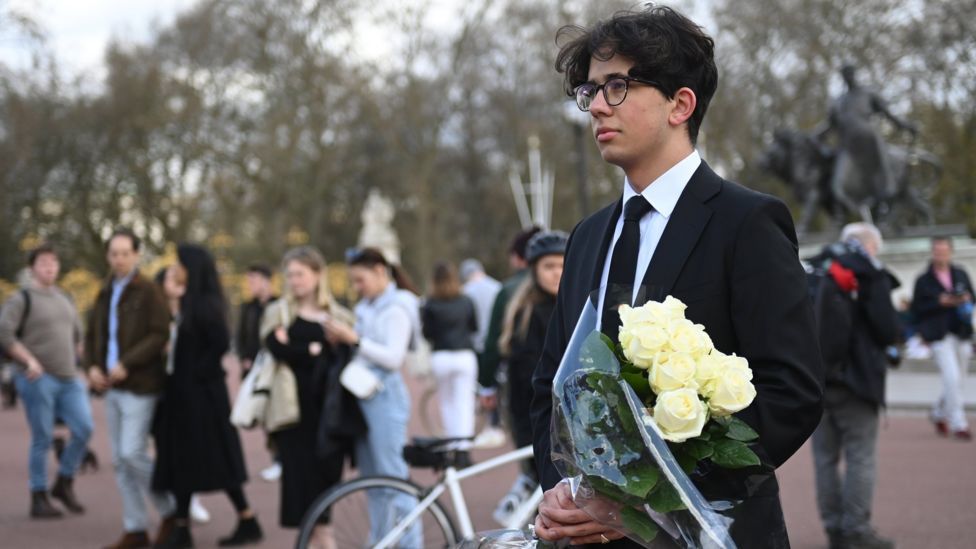 Rhea Varma, from nearby Pimlico, pulled up on her bike to lay flowers and a note saying "Rest in Peace Duke".

She told BBC News the duke was "the kind of stability that's so old-fashioned it's difficult to comprehend. He was a rock who brought integrity".

Adam Wharton-Ward, 36, left a bunch of lilies by the Palace gates. Visiting London from his home in France, he said he was so moved by the news he wanted to "rally round" for the Queen's sake.

"It's so sad. He's been with her for 73 years. If it wasn't for him who knows if she would have got through it," he said. 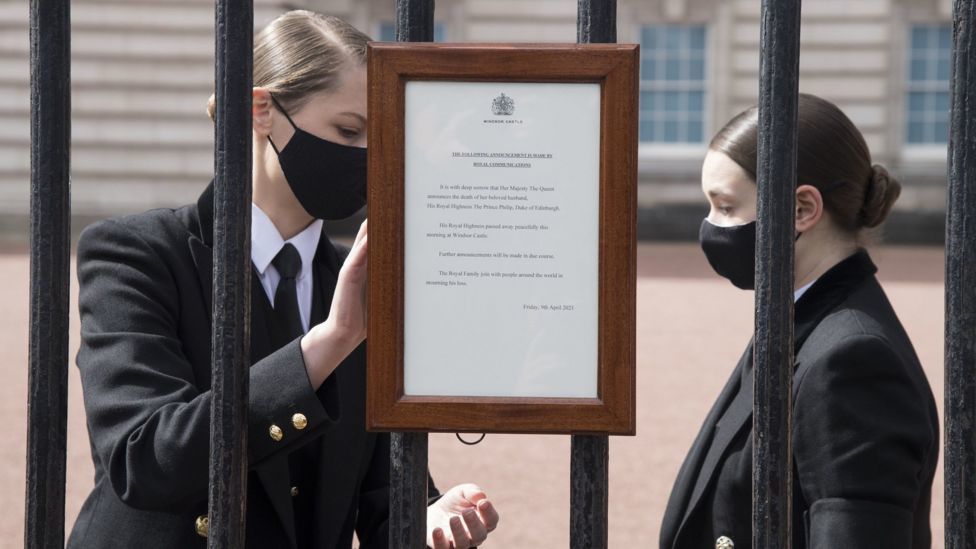 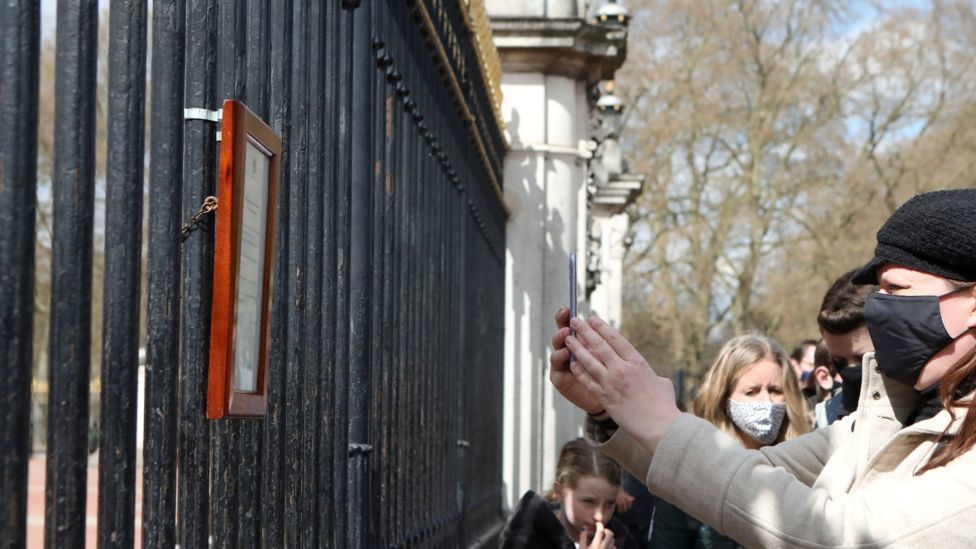 It confirmed Prince Philip "passed away peacefully this morning at Windsor Castle".

"Further announcements will be made in due course," it added. "The Royal Family join with people around the world in mourning his loss."

A similar announcement was also displayed outside the Palace of Holyroodhouse, the official residence of Queen Elizabeth II in Scotland, in Edinburgh.

The Palace's flag was flown at half-mast.

Traditionally, Royal Family announcements are made by displaying a framed notice at Buckingham Palace.

In recent years, birth announcements have been made in this way, with these notices mounted on a golden easel.

But the coronavirus pandemic has prompted changes to many of the traditions across the Royal households.

The Changing of the Guard ceremonies at Buckingham Palace, St James' Palace and Windsor Castle - seen by millions each year before the pandemic - were postponed in March 2020 to avoid mass gatherings. 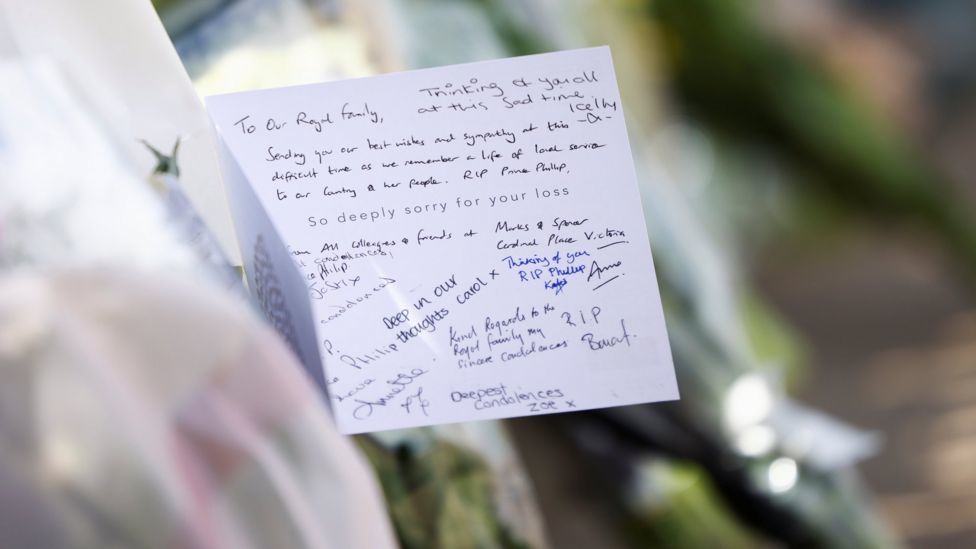