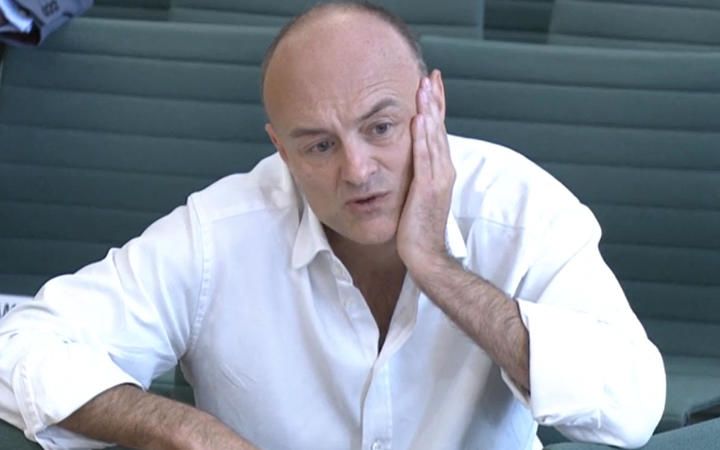 Thousands of people died needlessly as a result of government mistakes in the handling of the coronavirus pandemic, Dominic Cummings has said.

The PM's former top aide said Boris Johnson was "unfit for the job", claiming he had ignored scientific advice and wrongly delayed lockdowns.

He also claimed Matt Hancock should have been fired for lying - something denied by the health secretary.

At a marathon seven-hour evidence session, the former Downing Street insider painted a picture of policy failure, dithering and a government that had no useful plan for handling a pandemic.

He told MPs: "The truth is that senior ministers, senior officials, senior advisers like me fell disastrously short of the standards that the public has a right to expect of its government in a crisis like this."

He added: "I would like to say to all the families of those who died unnecessarily how sorry I am for the mistakes that were made and for my own mistakes at that."

Mr Cummings - who was forced out of Number 10 at the end of last year after an internal power struggle - said those on the front line of the pandemic were like "lions" being "led by donkeys".

But he claimed Mr Johnson had told him he liked to be surrounded by "chaos" in Downing Street, because it meant everyone had to look to the PM "to see who is in charge".

Asked if he thought Mr Johnson was a "fit and proper person" to get the UK through the pandemic, Mr Cummings replied: "No."

Mr Johnson hit back at some of his former aide's allegations at Prime Minister's Questions, insisting that the government's priority had always been to "save lives".

But Mr Cummings said that despite nearly losing his own life to Covid, the PM thought the first national lockdown, on 23 March last year, had been a mistake - and he was against a so-called "circuit breaker" lockdown in autumn 2020 for economic reasons, despite scientific advice.

Asked on what basis the PM had taken this decision, Mr Cummings said: "He wasn't taking any advice, he was just taking his own decision that he was going to ignore the advice."

He added: "The cabinet wasn't involved or asked."

The former adviser reserved his most savage criticism for Matt Hancock, claiming the health secretary should have been fired for "15 to 20" different things - accusing him of "criminal, disgraceful behaviour that caused serious harm".

He said he had repeatedly called on Mr Johnson to sack Mr Hancock, calling him "completely incapable of doing the job".

The prime minister had been furious when he came back to work after recovering from coronavirus to find that untested patients had been discharged to care homes in England, thereby allowing the virus to spread, Mr Cummings claimed.

Both he and the PM had been told "categorically in March that people will be tested before they went back to care homes".

Subsequent government claims about putting a "shield" around care homes were "complete nonsense", he said.

Mr Cummings also attacked Mr Hancock over PPE shortages, and accused him of "disgraceful behaviour" in setting a "stupid" target of offering 100,000 Covid tests a day, which he said had disrupted wider work to establish the test and trace system.

Committee chairman Greg Clark said Mr Cummings must provide written evidence to back up his claims about Mr Hancock, who will be quizzed by the MPs in two weeks' time.

Mr Hancock said he had not seen Mr Cummings' evidence in full adding "instead I've been dealing with getting the vaccination rollout going, especially to over-30s, and saving lives".

However he added that he would have "more to say" when he gives a statement to the House of Commons on Thursday.

"The health secretary will continue to work closely with the prime minister to deliver the vaccine rollout, tackle the risks posed by variants and support the NHS and social care sector to recover from this pandemic."

Labour's shadow health secretary Jonathan Ashworth said the "very grave allegations" appeared to be "well-founded" and the health secretary "needs to give us an explanation" if the country is to "maintain confidence in him".

*  Mr Johnson had never wanted tougher border controls to prevent the spread of the virus, as he wanted to be like the mayor in film Jaws, who kept beaches open despite the threat of a killer shark

Mr Cummings was questioned by the Health and Science select committees, for their inquiry into "lessons learnt" on the government's response to the pandemic.

Before the hearing began, he tweeted a picture of a whiteboard on which the government's "plan B" for the first wave of the virus was sketched out. 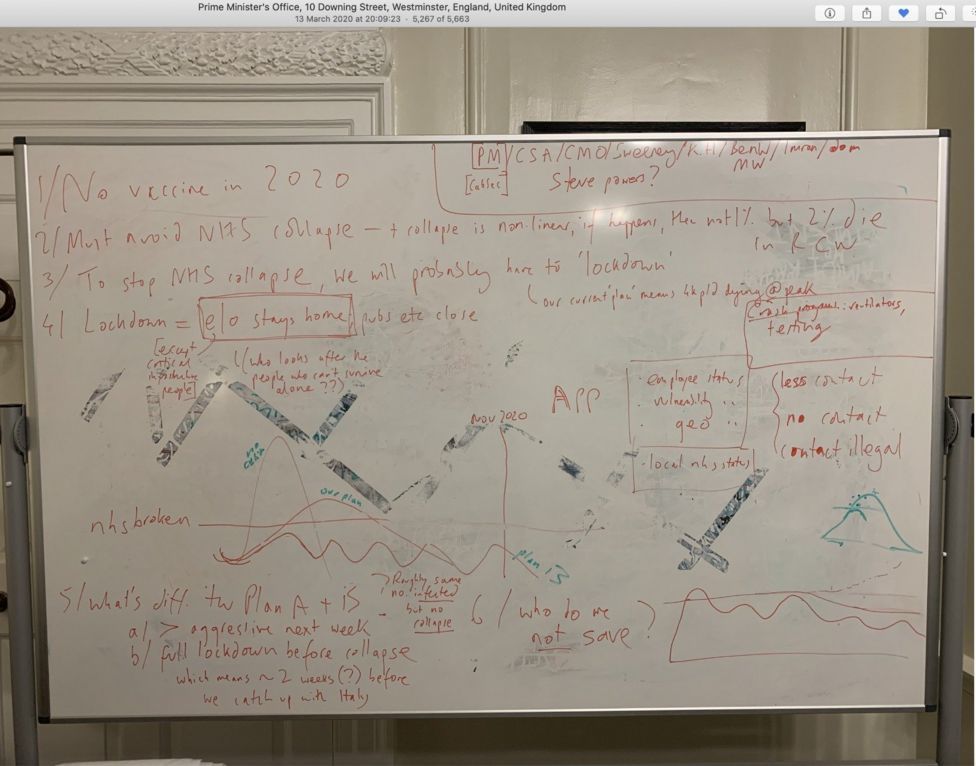 He told the MPs the original plan had been for limited intervention, with the hope of achieving "herd immunity", and he was "completely baffled" by Downing Street's denial of this.

He said the herd immunity strategy was abandoned when the scale of the death toll that would result from it became clear.

Mr Cummings was frank about some of his own failings - and admitted that his defence of a trip to County Durham during the first lockdown had "undermined public confidence".

But he said he had made the journey due to threats against his family - and he defended his claim that he had driven his family to Barnard Castle to test his eyesight, saying the story was too "weird" to have been made up.

He also gave his version of his departure from Downing Street, saying his relationship with Mr Johnson had broken down after the second national lockdown in October.

"The fact that his girlfriend (Carrie Symonds) also wanted rid of me was relevant but not the heart of the problem," he told MPs.

He said he regarded Mr Johnson as "unfit for the job" and that he had been "trying to create a structure around him (the PM) to try and stop what I thought were extremely bad decisions and push other things through against his wishes".

He also described how a meeting of the government's emergency Cobra committee on 12 March had been disrupted by US President Donald Trump wanting to start a "bombing campaign" against Iraq.

At the same time, he added, Mr Johnson's partner Carrie Symonds was "going crackers" about a "completely trivial" story in the Times regarding the dog she co-owned with the prime minister.

"From care homes to borders, repeatedly locking down too late and failing to learn from his mistakes, the PM's decisions and failures resulted in tens of thousands of avoidable deaths."

Speaking at Prime Minister's Questions, Mr Johnson told MPs: "The handling of this pandemic has been one of the most difficult things this country has had to do for a very long time and none of the decisions have been easy," he said.

"To go into a lockdown is a traumatic thing for a country, to deal with a pandemic on this scale has been appallingly difficult, and we have at every stage tried to minimise loss of life, to save lives, to protect the NHS and we have followed the best scientific advice that we can."

He added that he had not seen Mr Cummings' evidence to the select committee.

Conservative MP Tobias Ellwood defended the prime minister, saying that ministers should be free to speak their minds and even ask "silly questions" without "fear that one day they may be quoted or misquoted back to you".

"That completely diminishes the competence of the No 10 machine," he told BBC Radio 5 Live.

More than 127,000 people diagnosed with coronavirus have died in the UK since the start of the pandemic.