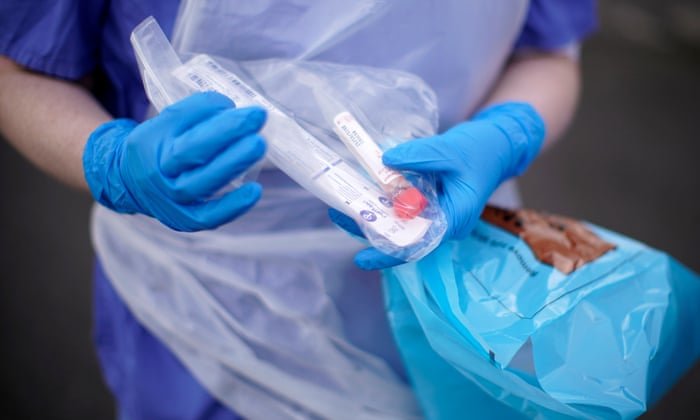 Doctors threaten to quit NHS over shortage of protective kit

The health secretary, Matt Hancock, said on Tuesday that 11,788 retired NHS staff had agreed to come back to work to help tackle the crisis – and announced the creation of a new 250,000-strong corps of “NHS Volunteer Responders”, who would be asked to take essential supplies to the most vulnerable people being “shielded” at home.

But as the crisis reaches what is expected to be its most dangerous period, doctors’ and nurses’ groups say their members are being expected to take unacceptable risks.

Dr Rinesh Parmar, chair of the Doctors’ Association UK, which represents grassroots medics, told the Guardian: “The longer this epidemic goes on for, if doctors feel that there is a widespread lack of personal protective equipment [PPE], then some doctors may feel they have no choice but to give up the profession they love, because they feel so abandoned by not being given the PPE that the World Health Organization recommends.

“That’s the travesty of this situation, that the government needs to protect frontline health workers and in return they will give 100%. But the government hasn’t kept its side of the bargain with NHS staff by not having enough PPE available to safeguard the health of doctors and nurses,” he said.

The Royal College of Nursing, which represents Britain’s 400,000 nurses, also signalled its deep unease with the serious shortages of PPE and said the issue could compel nurses to choose between their jobs and their safety.

A spokesperson said: “Our priority is to make sure nursing staff in frontline care have the masks and equipment they need but the government and NHS must be able to offer reasonable protection and assurances to those who lend a hand in these times.

“Nursing staff should never be forced to choose between their safety and their livelihood - this equipment must desperately reach the frontline.”

One doctor messaged Parmar on Tuesday to say: “I’ve got an immuno-compromised husband. Without PPE I put him at risk every single day. If this is not sorted soon then I’m off.”

Amid growing reports of NHS staff ending up in intensive care after falling ill with Covid-19, Parmar disclosed testimonies he had received in the last 24 hours from other doctors anxious about the shortages of protective equipment.

One said: “Without adequate PPE our workforce will be decimated. Who will then be left to look after patients?” Another said: “I feel totally abandoned. We don’t have the protective equipment that we desperately need and our children are being treated like orphans and sent off to care camps.”

NHS England and the government have made a major effort since the weekend to address concerns about protective gear. The army has been called in to help deliver millions of pieces of PPE since the weekend and 200 different hospitals are receiving extra kit overnight on Tuesday.

Hancock promised on Tuesday to “strain every sinew” to ensure NHS staff had the equipment they needed.

He acknowledged the problem, saying many staff were asking about it – and said more than 7m pieces of PPE had been shipped in the past 24 hours, and that a helpline had been set up, which healthcare workers could contact if they were missing masks or other necessary equipment.

Staff across the NHS have voiced growing alarm about widespread shortages of kit, especially face masks and visors to protect their mouths and eyes from droplets of water coming from the mouth or nose of an infected patient.

Organisations representing hospital doctors, nurses, paramedics, GPs and midwives have all voiced fears for their safety in recent days, prompting ministers and NHS bosses to call in the army to deliver millions of pieces of protective clothing to hospitals.

The fresh concerns came as the death toll from the outbreak increased sharply, with another 87 fatalities taking the total across the UK to 422.

Speaking less than 24 hours after the prime minister, Boris Johnson, exhorted the public to “stay at home”, the health secretary underlined the importance of obeying the latest distancing rules.

“No matter how big we grow the NHS, unless we slow the spread of the virus, then as we’ve seen, those numbers will continue to rise – and that’s why it’s so important that everybody follows the advice and stays at home,” he said.

“We ask for your forbearance but I think the public knows that this is important. The more we follow the rules, the sooner we will stop the spread, and so everybody has a responsibility to follow those rules.”

Hancock confirmed that the NHS would open a new, temporary hospital next week – the NHS Nightingale hospital at the Excel conference centre in London, once the venue for the then-prime minister Gordon Brown’s G20 summit at the height of the global financial crisis.

The hospital will have two huge wards, each capable of housing 2,000 people, and the military will help to set up and run it, Hancock said.

Up to 1.5 million people with underlying health conditions that might make them especially susceptible to the effects of Covid-19 have been sent letters this week, urging them to remain in their homes for 12 weeks.

Hancock said he was looking for a quarter of a million volunteers to sign up to deliver food and medicines to these “shielded” individuals, to take them to medical appointments, and to stay in touch with them by phone.
Add Comment