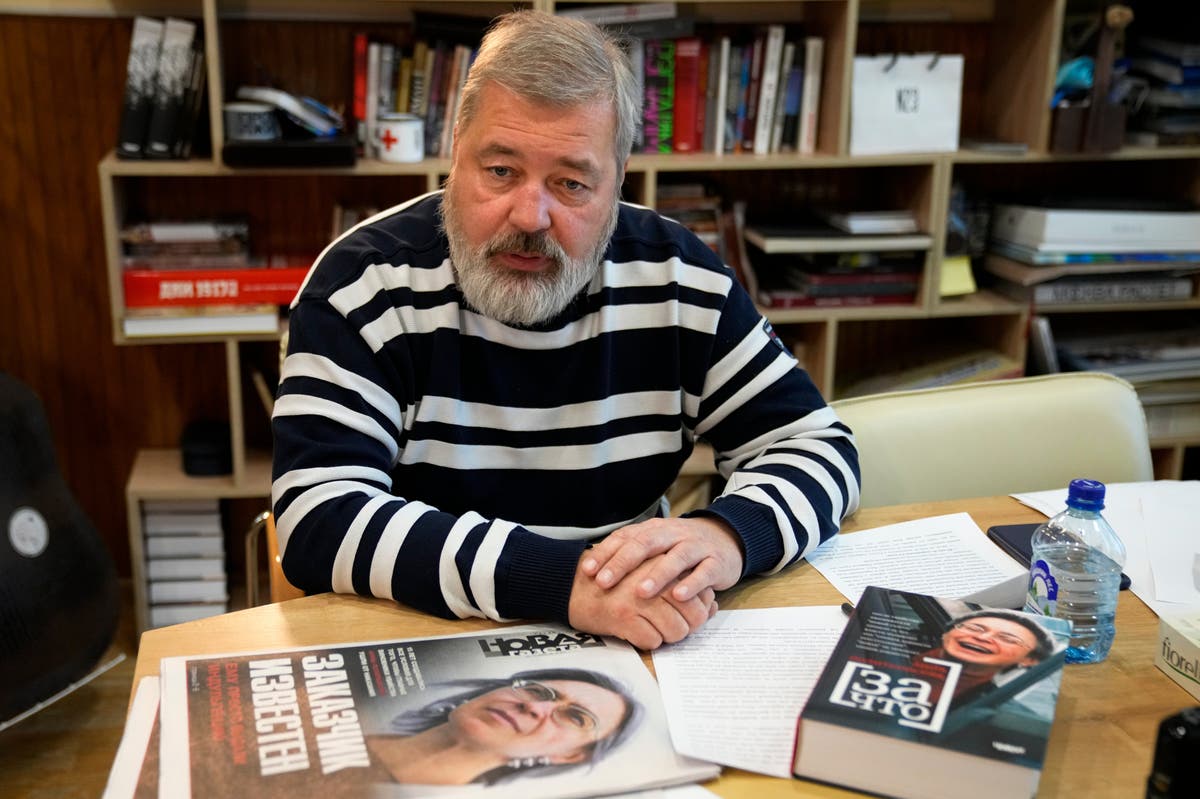 Dmitry Muratov: This Nobel Peace Prize is for my colleagues who were killed

EXCLUSIVE: As the world congratulates him on his Nobel Peace Prize, Russian newspaper editor Dmitry Muratov tells Anne McElvoy nothing will stop his fight for a free press

What must it be like, after years in the shadows, slogging away at investigations into the murders of Russian journalists and opposition figures, to be awarded the Nobel Peace Prize? “A surprise,” says Dmitry Muratov wryly when I catch up with him by phone in the daze of media interviews and congratulations from strangers on the streets of Moscow.

The Norwegian “council of the gods” anointed Muratov, editor of Russia’s Novaya Gazeta, and Maria Ressa, a human rights and anti-fake news campaigner in the Philippines, as the recipients of this year’s award in recognition of the travails of journalists working in increasingly hostile and autocratic conditions around the world. Muratov has plugged away at the thankless and fraught task of bringing transparency to post-Soviet Russia since the Nineties — a veteran member of the awkward squad, undeterred by threats, near bankruptcies and the murder of six of his prominent journalists and friends.

He is speaking from the back of a car as he sets out to mark his win at a sedate tea party with Mikhail Gorbachev, the 90-year-old former Soviet president who has figurehead stature as a shareholder of the paper (together with Alexander Lebedev, whose son Evgeny is the proprietor of the Evening Standard). Lebedev senior and Gorbachev fought to keep the Novaya Gazeta alive in the Nineties; an odd couple protecting liberal journalists — one a high-ranking former KGB man, the other the last head of the Soviet Union. You don’t have to read too far between the lines to see that both had grave concerns about Russia’s direction and seeping corruption.

I ask Muratov, 59, how the Novaya Gazeta office responded to the award — in a year which has seen a tightening of clampdowns on Russian independent media, ranging from TV outlets to websites. “Well the editorial office started drinking. We are Russian people after all,” he laughs. That strikes me as a lighthearted take on events, since the photos show some pretty serious-looking faces.

The award honours reporting on corruption, crimes and an overall tightening of clampdowns on free expression in Russia have placed Muratov and his colleagues in no small danger. A ram’s head and a wreath were delivered to his office in 2018 after an exposé of a Kremlin-linked group believed to be acting in Africa and Syria. 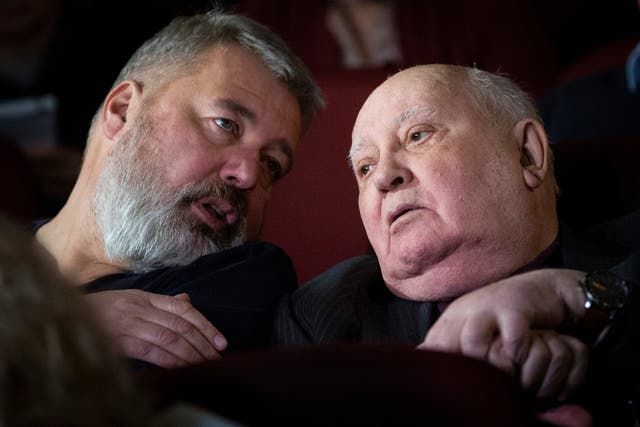 The Novaya has campaigned to bring to justice murderers of six prominent journalists and has published investigations into subjects such as torture in the military and prison system, the war in Ukraine and the intricate relationship between the power in Moscow and the lawless world of Chechnya.

This month marks the 15th anniversary of Anna Politkovskaya’s murder. She was a journalist of extraordinary determination who was gunned down at her apartment on October 7, 2006, in the midst of reporting on human rights abuses under the Chechen leader Ramzan Kadyrov and his links with the Kremlin. Kadyrov remains in power today, with the dubious honour of possessing the longest list of serious human rights violations in the former Soviet states and a starring role as an eccentric but well-tolerated leader on televised conference calls lavishing tributes on Vladimir Putin.

“This award is not mine,” Muratov says tautly. “It was awarded to colleagues, who have been killed, who have perished — Anna Politkovskaya, Yuri Shchekochikhin, Natalya Estemirova, Anastasia Baburova, Stanislav Markelov…” It is rather shameful to be reminded of a list of journalists who met suspicious or violent deaths as a result of their reporting and whose names have somehow faded from the West’s consciousness. Shchekochikhin was an anti-corruption campaigner and one of the string of contributors, journalists and commentators connected to Novaya Gazeta. Together, they have made common cause in defending the liberal press against repressive legislation, denunciation, threats and worse.

Muratov has a blunt manner that veers between a factual list of obstacles and emotional intensity. He is also at pains to point out that this award goes “to our special correspondents who risk their lives in hot spots, in war zones, during natural disasters”. He tells me to watch the paper’s new film about Politkovskaya. Those close to him say that, despite his external toughness, the murder of Politkovskaya was the last straw for him emotionally. I remember it as the moment the defence of the free press collapsed in Russia — and it was followed by a wave of other killings, notably Boris Nemtsov, the charismatic opposition politician in 2015, and the attempted murder in the last year of Alexei Navalny, the leader of the main opposition. “We still have a duty to protect colleagues who perished. It is still unknown who is behind the killing of Politkovskaya, it is still unknown what substance was used to poison Shchekochikhin, it is still unknown who was behind the killing of Estemirova. And this editorial office will continue its investigations.” 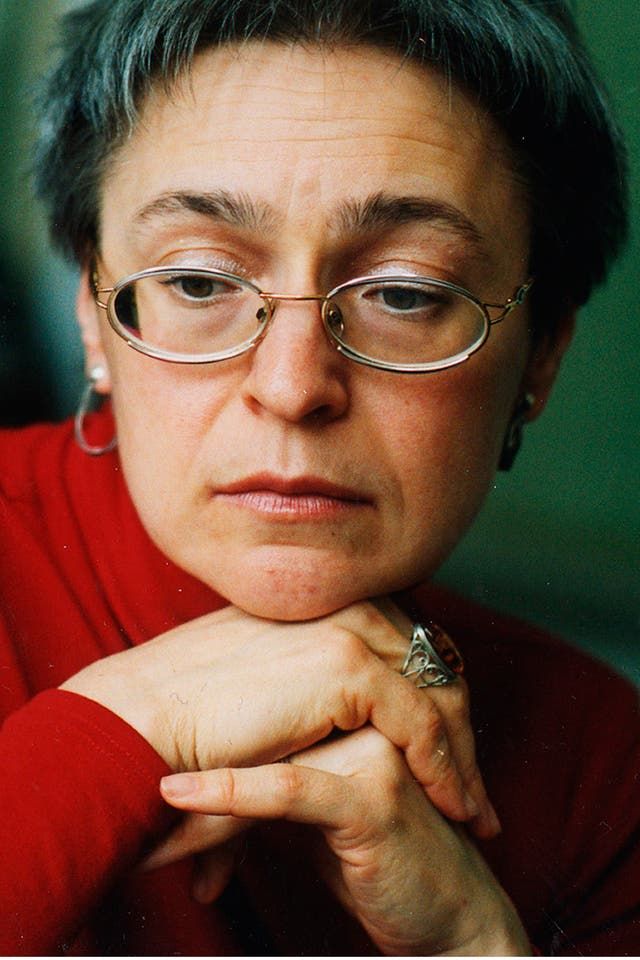 There are vocal critics who think the Nobel should have gone instead to Navalny, currently serving a jail sentence for illegal opposition activity — and that the Nobel judges fudged the moment and made a less controversial choice. This argument now rages in Russia’s schismatic opposition circles and Muratov took to the airways saying that he too would have given the prize to Navalny — and would use his platform as a Nobel-winner to advocate for the imprisoned dissident. Navalny tweeted from prison: “I sincerely congratulate Dmitry Muratov and @novaya_gazeta on receiving the Nobel Peace Prize. This is a well-deserved reward that was handed out on a very symbolic date. The day before the announcement was the 15th anniversary of the murder of journalist Anna Politkovskaya (who, unfortunately, isn’t the only murdered journalist of Novaya Gazeta), and this reminds us of what a high price those who refuse to serve the authorities have to pay... I am glad that by its decision (at least it seemed so), the Nobel Committee stressed that no matter how the likes, algorithms, private and public money or subscribers influence us, the main thing we need now and always is journalism that is not afraid to tell the truth.”

I wonder what Muratov thinks he has achieved given that murders of Russian liberal journalists and opposition figures tend to end up half-resolved at best with the real string-pullers in the dark — suspected but unnamed.

“Neither I nor Novaya Gazeta have a final understanding of who ordered the hit,” Politkovskaya’s son Ilya Politkovsky noted last week. The paper is campaigning for an extension to the 15-year moratorium statute of limitations on investigations into major crimes.

In the past few years the mood has darkened further, with incursions into Ukraine (still unresolved) and the seizure of Crimea. Only Putin sails on, heedless. Muratov’s interests have broadened into reporting on conflicts in the former Soviet states too. “There is a lot of talk about war nowadays, about Ukraine. In our country, which has lost almost 100 million people last century, military ideas are becoming popular. That needs investigating too”. 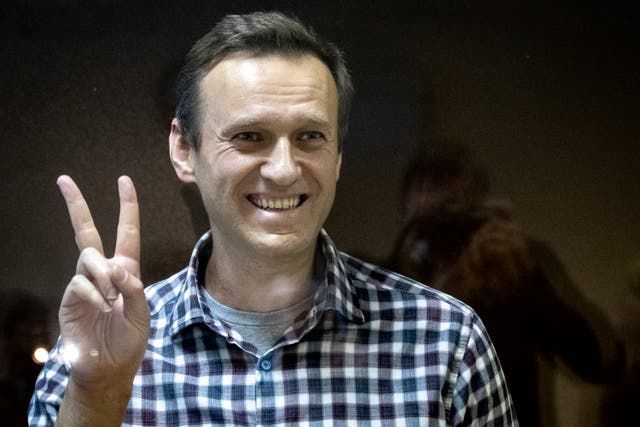 Muratov was born in Kuibyshev, southwestern Russia (now known as Samara). He studied the history of language at university where he became interested in journalism. After graduating, he served in the Soviet army working in communication and security and went into newspapers. In 1993, he and colleagues from a newspaper called Komsomolskaya Pravda left to start Novaya Gazeta. Their goal was to create an honest and independent news source. It started with two computers, one printer and staff working for free.

So what is next? Nobel or not, he’s the paper’s best-known voice and now a globally-recognised figure, sitting on scoops and, I suspect, emboldened by the recognition. “I am not able to tell you what our future investigations will be on. We always keep it under wraps until the very last moment.” He’s also moved to masterminding reports on ecological crises. “During the ecological disaster in Taymyr, our correspondents produced reports which ended up with the owners of Norilsk Nickel being fined $2 billion (for environmental abuses).” This, on the other hand, was not entirely unwelcome news for the Kremlin as Putin sought to clamp down on over-powerful oligarchs.

So what does independence mean now in practice and what are its limits? Alexander Lebedev has written in a recent memoir about his own travails, including attempts on his life and seizure of assets to push him out of public life — he helped bankroll the paper until a sustained campaign against him and attempts on his life convinced him to reduced his shareholding, while refusing (along with Gorbachev) to give up his symbolic stake and both remain prominent supporters of the paper.

Muratov says: “In the history of our newspaper, which will soon turn 30, we have never received a penny from the state. The rest is up to us: we write what we want.” He doesn’t “see any limitations” (and in fairness, a close reader will find criticisms of Putin’s popularity and economic record which are increasingly hard to find in Moscow’s strangled media).

Muratov’s award has come at a time when the Kremlin has insisted that critical media outlets declare themselves “agents of a foreign power”. That is a fate Novaya Gazeta has so far escaped.

When we spoke, Putin had not yet congratulated Muratov, there was only an ambiguous statement from the Kremlin suggesting that it might happen “in time”. Yesterday, Putin said: “If he doesn’t violate Russian law, and if he doesn’t give a reason to be declared a foreign agent, then he won’t be,” when asked if he can promise that Muratov will not be labelled as a foreign agent. If Muratov “hides behind the Nobel Prize like a shield in order to violate Russian law, then it means he’s doing it deliberately in order to attract attention to himself or for some other reason”. When I ask Muratov whether he would have liked to be congratulated, the short reply was “I didn’t understand it that way” (I don’t think he is exactly waiting on the Kremlin switchboard). He switches tack sharply: “Navalny has congratulated us on receiving the prize. Nothing more to say.” So, like much else in Russia, the Nobel comes with a bundle of thorns as well as flowers. But then Dmitry Muratov is used to that.