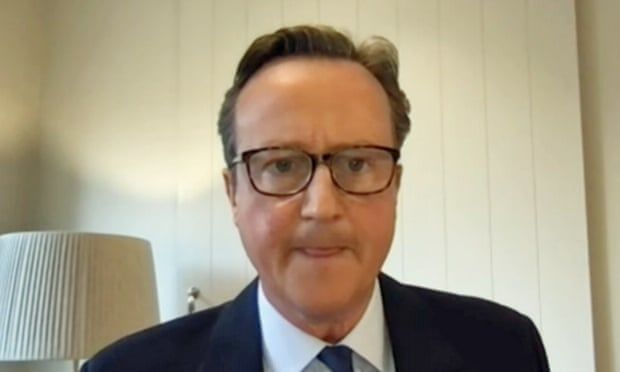 The Treasury select committee said it was inappropriate of the ex-prime minister to send 62 messages to former colleagues pleading for them to help the bank, in which Cameron held a “very significant personal economic interest”.

Greensill Capital specialised in supply chain finance, where businesses borrow money to pay their suppliers, but collapsed in March this year after losing insurance cover for loans issued to its customers.

The committee’s report, published on Tuesday, found that Cameron did not break lobbying rules, but said “that reflects on the insufficient strength of the rules”. It said Cameron’s behaviour in the saga highlighted a “strong case for strengthening [the rules]” to prevent former prime ministers from lobbying serving ministers in search of personal economic gain.

“Cameron’s use of less formal means to lobby government showed a significant lack of judgment, especially given that his ability to use an informal approach was aided by his previous position of prime minister,” the report said. “Cameron appears to accept that, at least to some degree, his judgment was lacking.”

The committee said that as a result of the scandal it expected the Treasury to “put in place and publish formal processes to deal with lobbying attempts by ex-prime ministers or ministers in the future”.

Cameron, who joined Greensill as an adviser and lobbyist exactly two years after he left No 10 (meaning that he stayed just within the current lobbying rules), bombarded ministers and officials with dozens of pleading text messages during the height of the pandemic begging for Greensill to be allowed access to the government’s coronavirus loan support scheme.

* Twelve texts to Sir Tom Scholar, the permanent secretary at the Treasury.

Cameron often signed off the messages “Love Dc” or with a simple thumbs-up emoji.

“We question Cameron’s judgment in relation to his lobbying on behalf of Greensill,” the report said. “Cameron appears to have relied heavily on the board of Greensill as a guarantee of its propriety and financial health, when arguably he should have taken a broader and more enquiring assessment of the business. There were signals available to Cameron at the time when he was lobbying the Treasury and others which might have led him to a more restrained approach.”

Mel Stride, the Conservative chair of the Treasury select committee, said: “The Treasury should have encouraged David Cameron into more formal lines of communication as soon as it had identified his personal financial incentives. However, the Treasury took the right decision to reject the objectives of his lobbying, and the committee found that Treasury ministers and officials behaved with complete and absolute integrity.”

Cameron’s lobbying campaign was ultimately unsuccessful as Greensill was denied access to the government’s Covid corporate financing facility (CCFF), but the report found that Greensill did benefit from the use of loan guarantees provided through the coronavirus large business interruption loan scheme (CLBILS).

The former prime minister repeatedly refused to tell the committee how much his personal shareholding in Greensill was worth before the bank collapsed. Newspaper reports suggested he had told friends that he stood to make £60m from a successful flotation of the supply chain financing firm.

The committee’s investigation also revealed that Cameron used Greensill’s private jet for a number of flights to Newquay airport in Cornwall to visit his “third” holiday home nearby.

In a statement, Cameron said: “While I am pleased that the report confirms I broke no rules, I very much take on board its wider points. I always acted in good faith, and had no idea until the end of last year that Greensill Capital was in danger of failure.

“However, I have been clear all along that there are lessons to be learned. As I said to the committee, I accept that communications of this nature should be done in future through only the most formal of channels.

“I agree that the guidance on how former ministers engage with government could be updated and was pleased to provide some suggestions on this to the committee.”