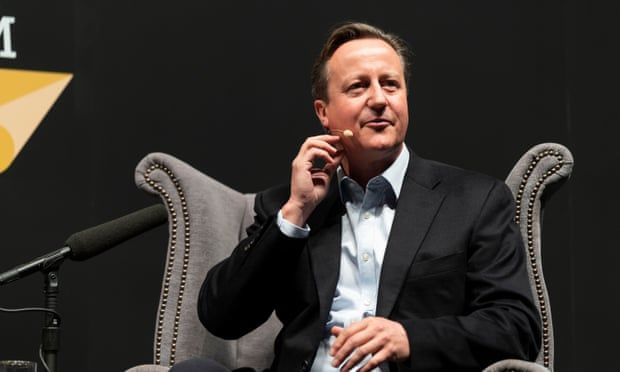 Ex-PM says he acted within rules but admits there are ‘important lessons’ to be learned
David Cameron has broken his 30-day silence over lobbying ministers on behalf of the scandal-hit company Greensill Capital, accepting he should have acted differently and used only “the most formal channels”.

Cameron, who was first contacted by the Financial Times in early March, said he had reflected on his conduct and that “important lessons” would be learned. The first formal request for comment was submitted to his office on 12 March and Cameron had since ignored all requests from national media.

The former prime minister, who spent months lobbying for the company – including sending texts to the chancellor, Rishi Sunak, two other ministers and senior Treasury and No 10 officials – said in Sunday’s statement that he had not broken codes of conduct or government rules.

“However, I have reflected on this at length,” he said. “There are important lessons to be learned. As a former prime minister, I accept that communications with government need to be done through only the most formal of channels, so there can be no room for misinterpretation.”

His remarks that his actions were “misinterpreted” are likely to raise eyebrows in Westminster. As a shareholder, Cameron stood to gain potentially millions from Greensill, but his shares are worthless after its collapse.

Cameron defended his decision to directly text Sunak, saying it was understandable that there would be concern about “the sense, and reality, of ease of access and familiarity” he believed it “right for me to make representations on behalf of a company involved in financing a large number of UK firms”.

Cameron’s role in the lobbying scandal has been particularly embarrassing for him after said he would regulate lobbying as prime minister. In a 2010 speech before he was elected, Cameron said it would be “painful” to deal with lobbying but said he would attack “the privilege, excess and exemption from normal rules that has infected parliament”.

He described lobbying as “the lunches, the hospitality, the quiet word in your ear”. On Sunday it emerged that Cameron arranged a private drink with the health secretary, Matt Hancock, and Lex Greensill, the financial services company’s Australian founder.

The FT first revealed that Cameron repeatedly texted Sunak to grant Greensill Capital access to the Bank of England’s Covid corporate financing facility (CCFF). Texts released last week show Sunak telling Cameron he had “pushed the team to explore an alternative with the Bank that might work”. There was also a call between the pair.

While access to the CCFF was ultimately rebuffed, the National Audit Office is considering a request to investigate how Greensill Capital was later accredited to the coronavirus large business interruption loan scheme (CLBILS), handing it the ability to access government-backed loans of up to £50m.

Cameron said despite his efforts it was clear the government did not wish to take up his proposals. “Ultimately, the outcome of the discussions I encouraged about how Greensill’s proposals might be included in the government’s CCFF initiative – and help in the wake of the coronavirus crisis – was that they were not taken up,” he said.

“So, I complied with the rules and my interventions did not lead to a change in the government’s approach to the CCFF.”

Hancock, is also under mounting pressure to explain his meeting with Greensill, set up by Cameron who brought the company founder along with him to a “private drink” with the health secretary, according to the Sunday Times. There he is said to have lobbied Hancock to introduce a payment scheme that was later brought in for NHS staff.

There are no minutes of Hancock’s meeting with Cameron and Greensill but allies of the health secretary have said everything was recorded in the proper way – a claim that they will come under pressure to release documents to prove.

The Guardian understands that No 10 is set to face down calls for an inquiry into the disgraced financier’s reach across government or to overhaul current lobbying rules.

Boris Johnson is not said to feel under significant pressure to force ministers to give public accounts of their meetings or to announce any review of lobbying rules, No 10 sources said.

Hancock and Johnson will avoid any public questioning of their actions because all broadcast interviews and press conferences have been suspended this week because of the period of national mourning ahead of the Duke of Edinburgh’s funeral on Saturday.

That period has also left opposition politicians and select committee chairs constrained in their public criticism of Hancock in the latest revelations.

In his 1,700 word statement, Cameron also confirmed he met Saudi Arabia’s crown prince during a business trip with Greensill in January 2020, a little over a year after the brutal murder of the critical Saudi journalist Jamal Khashoggi.

“While in Saudi Arabia, I took the opportunity to raise concerns about human rights, as I always did when meeting the Saudi leadership when I was prime minister,” he said.

In February this year, US intelligence concluded that Crown Prince Mohammed bin Salman was likely to have approved an operation to kill or capture Khashoggi inside the Saudi consulate in Istanbul.

Labour has called for an urgent investigation into the deepening scandal as well as pledging a major overhaul of lobbying rules. Two key bodies have said the revelations lie outside their scope to investigate – including the lobbying registrar set up by Cameron himself.

Harry Rich, the Registrar of Consultant Lobbyists – a post set up by Cameron in 2014 – found the former prime minister was an employee of Greensill Capital and so was not required to declare himself on the register of consultant lobbyists.

The shadow cabinet office minister Rachel Reeves and shadow chancellor Anneliese Dodds has also asked the Committee on Standards in Public Life to investigate – who also said they could not launch investigations into individuals.
#Covid  #Coronavirus  #Boris Johnson
Add Comment