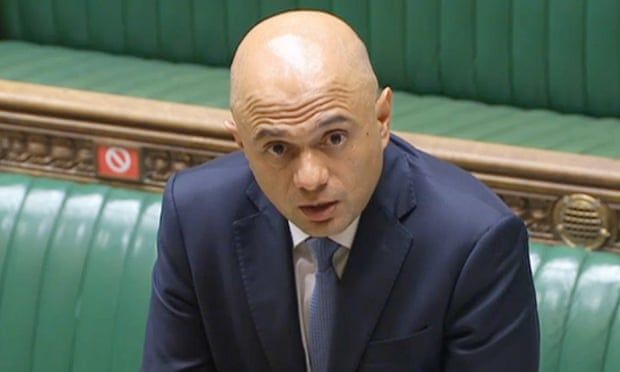 Two million people could contract Covid this summer, potentially meaning up to 10 million must isolate in just six weeks, Guardian analysis shows, prompting warnings over risks to health and disruption to the economy.

The figures come as Sajid Javid, the health secretary, said England was entering “uncharted territory” in its wholesale scrapping of lockdown rules from 19 July. New infections could easily rise above 100,000 a day over the summer, he said, more than at any point in the pandemic.

Javid announced that anyone who has been double-vaccinated will not have to isolate after coming into contact with a confirmed Covid case from 16 August, with under-18s also exempt. The rule for adults applies at least 10 days after their second dose. Anyone who has caught Covid must still isolate by law.

The Guardian understands ministers were warned that waiving the requirement for contacts to isolate immediately on 19 July would result in cases being up to 25% higher than if waiting another four weeks to do so.

But the decision to wait before dropping the self-isolation rule, combined with soaring cases amid further unlocking, has triggered growing concerns over the toll of long Covid and potential chaos for businesses forced to close because of staff absences.

A decision on travel rules is set to be made on Thursday, with ministers reportedly favouring a policy that would take effect before August to waive quarantine rules for double-vaccinated passengers from amber-list countries to England.

UK Hospitality called for extra measures to protect a sector where 60% of workers are 16 to 34 years old – meaning many will not have been double-vaccinated by mid-August. Demands for self-isolation were causing “carnage” even at existing infection rates, the trade body said.

Ministers accept a rise in cases is inevitable as the country unlocks but argue the pace of vaccination means it will not be accompanied by significant hospitalisations or deaths. The latest official data however, shows the number of people who are in hospital with Covid has increased by 38% in the past week to 1,988 – the fastest rate of increase since last October.

Downing Street also regards a summer reopening as potentially less risky than delaying until the autumn when it could coincide with unvaccinated children returning to the classroom, and seasonal flu. 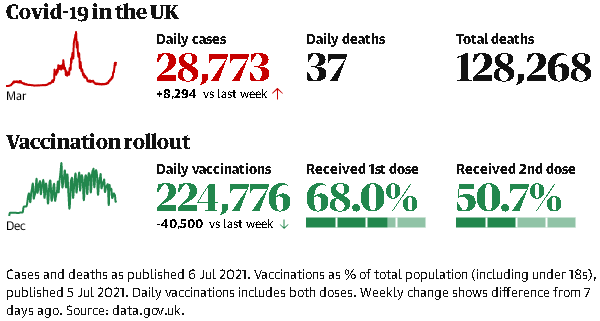 Speaking in the House of Commons on Tuesday, Javid said he was “very up front” about the trajectory for infections. “This pandemic is far from over and we will continue to proceed with caution. But we are increasingly confident that our plan is working, and that we can soon begin a new chapter, based on the foundations of personal responsibility and common sense rather than the blunt instrument of rules and regulations,” he said.

Coronavirus infections are currently running at just under 29,000 a day UK-wide, and the health secretary told MPs that modelling suggested the figure could reach 50,000 a day by 19 July and then 100,000 a day later in the summer.

This would not overwhelm the health service, Javid said, because the vaccination programme had become a “wall” against mass severe illness and deaths: “Jab by jab, brick by brick, we have been building a defence against this virus.”

But 100,000 cases a day would be unprecedented during the pandemic in the UK, which hit a daily peak of just over 81,000 in late December.

While projections about the rise in cases vary considerably, even a relatively conservative estimate – a daily average of 35,000 cases a day from now till 19 July, and an average of 60,000 from then until 16 August – would give a total above 2 million.

Currently, NHS test and trace contacts an average of 3.2 people for each confirmed case, but amid the more widespread social mixing of last summer it was closer to five, giving a potentially affected pool exceeding 10 million people. By law, until 16 August, all those coming into contact with a Covid case have to isolate for 10 days after exposure.

The level of expected disruption will raise fears of reduced compliance with self-isolation rules, including people ceasing to use the NHS Covid-19 app.

While Labour has supported the general principle of reopening, it was seeking more mitigation measures such as continued mandatory mask use in crowded indoor spaces, and has warned about the impact of high case rates beyond death figures.

He said: “As more people are exposed to the virus more people will be forced to isolate themselves and yet ministers still refuse to fix sick pay support. The government’s strategy now relies on a combination of vaccination and natural infection amongst younger people.”

The end to quarantine measures for most contacts of Covid cases – those who have tested positive will still need to self-isolate – is in part an effort to prevent the economy from seizing up amid the rise in infections, as well as limiting the impact on education. Figures on Tuesday showed 641,000 children in England were absent from school last week due to Covid.

But while ministers have pledged to offer at least a first vaccination to all adults by the end of July, at current rates of progress there could be about 12 million people in England still awaiting their second jab by 16 August.

Kate Nicholls, chief executive of UK Hospitality, said: “Today’s announcement doesn’t go far enough, quickly enough. The sector is experiencing severe staff shortages, compounded massively by the absence of team members who have been told to isolate despite not having shared shifts with colleagues who tested positive.

“Introducing a test to release system for fully vaccinated people from the middle of next month not only fails to recognise the carnage the current system is causing hospitality and the wider economy, but also significantly discriminates against a huge proportion of our workforce.

“With cases predicted to continue to rise, this means that hospitality’s recovery after 16 months of lockdown and severely disrupted trading will be harmed. Operators will be forced into reducing their operating hours or closing venues completely.”

Munira Wilson, the Liberal Democrat health spokesperson, said younger people “will bear the brunt” of what she called a government “hellbent on ditching all restrictions in one go”. She said: “After all the pain young people have gone through, from the exam results fiasco last summer to job losses in the hospitality sector, this will feel like a bitter blow after being promised a so-called freedom day.”