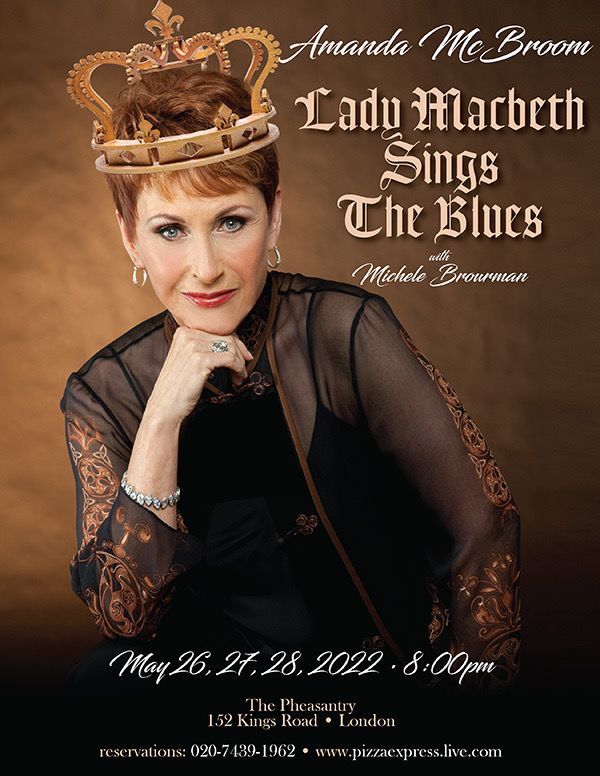 Critically Acclaimed Singer/Songwriter/Actress, Amanda McBroom returns to the Shakespearean territory of London with a new concert "Lady MacBeth Sings The Blues" at The Pheasantry, PizzaExpress Live

"Lady Macbeth Sings the Blues" is an evening of contemporary songs, both tragic and hilarious, for Shakespeare’s most famous heroines written by renowned actress/singer Amanda McBroom, best known for her hit song THE ROSE, made famous by Bette Midler. Enter the musical world of Titania, queen of the Fairies, Juliet, Gertrude, and of course Lady M herself. What would they sing if they were alive today? Come find out!
Tickets are

Amanda will be joined by Musical Director/Accompanist: Michele Brourman
Critically Acclaimed Singer/Songwriter/Actress, Amanda McBroom returns to the Shakespearean territory of London with a new concert
"Lady MacBeth Sings The Blues" at The Pheasantry, PizzaExpress Live

Tickets are £25.00
Available at: https://www.pizzaexpresslive.com/whats-on/amanda-mcbroom-lady-mac-beth-sings-the-blues

Amanda came to the attention of the general public when Bette Midler’s version of Amanda’s song “The Rose” hit number "1" on the charts. Her songs have been recorded by Barbara Cook, Manhattan Transfer, Judy Collins, Barry Manilow, Olivia Newton John, Anne Murray (the #4 Canadian hit "Anyone Can Do the Heartbreak",) and Curt Cobain to name a few.

She has received a Golden Globe Award, a Grammy nomination, the Johnny Mercer Songwriter of the Year Award, and the Mabel Mercer Lifetime Achievement Award. With her writing partner, Michele Brourman, she has written lyrics for 19 Universal Animation features, including the “Land Before Time” series and the “Curious George,' series. In addition, she was also a featured lyricist for the TV classic series “Cop Rock.” Amanda has written two musicals, "Heartbeats," and "A Woman of Will," and is lyricist for "Dangerous Beauty," which had its world premiere at the popular Pasadena Playhouse.

In 2017, her “Voices,” CD, featuring a duet with country star Vince Gill of her international classic "The Rose," reached #1 on Amazon.com
Her 2021 single, "Send in the Clowns," which was a tribute to the late Stephen Sondheim, received airplay across the country and London.
Audio Link to "Send in the Clowns": https://youtu.be/RIoZqIO_0Y0