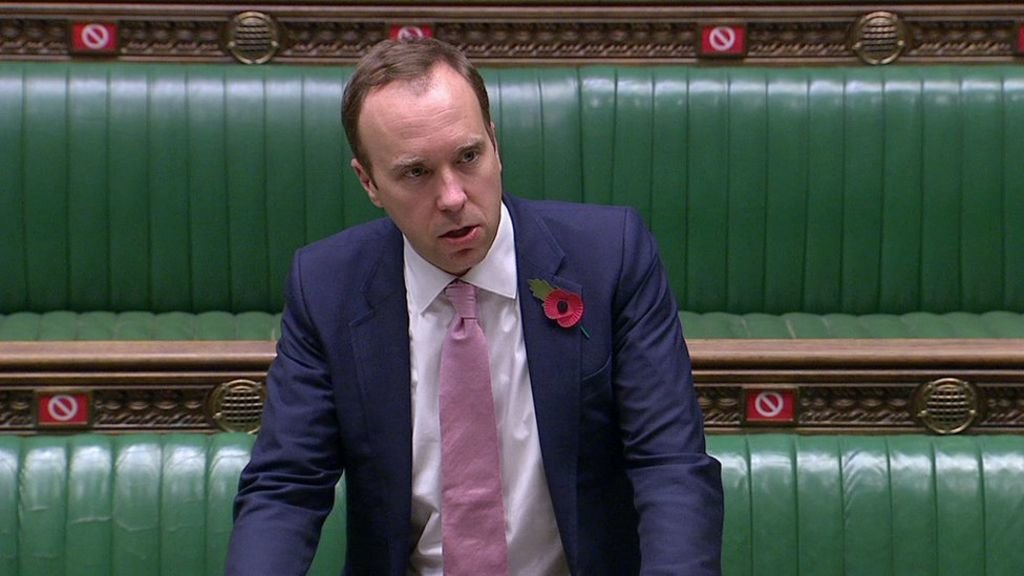 Covid vaccine: No guarantees on Pfizer roll-out but NHS ready

The NHS will be ready from December to roll out the new coronavirus vaccine if it gets approved, Health Secretary Matt Hancock has said.

Mr Hancock told MPs the news about the vaccine was an important step but "there are no guarantees".

He also said "we don't know" how many people will need to be vaccinated in order for life to return to normal.

And he announced that, from Tuesday, NHS staff will begin being tested twice a week.

It comes as a further 20,412 coronavirus cases were reported in the UK on Tuesday, with another 532 deaths within 28 days of a positive test recorded.

While the number of deaths recorded is higher than previous days, there is often an increase at the beginning of the week due to delays in weekend reporting.

On Monday, early results from the world's first effective coronavirus vaccine showed it could prevent more than 90% of people from getting Covid.

The vaccine has been developed by pharmaceutical companies Pfizer and BioNTech and is one of 11 vaccines that are currently in the final stages of testing.

The companies now plan to apply for emergency approval to use the vaccine by the end of November - and a limited number of people may get the vaccine this year.

The UK has already ordered 40 million doses - enough to vaccinate up to 20 million people, as each person will need two doses for it to work effectively.

But Prime Minister Boris Johnson warned people not to "rely on this news as a solution" as it is still "very, very early days".

Speaking in the Commons on Tuesday, Mr Hancock said: "If this or any other vaccine is approved, we will be ready to begin a large-scale vaccination programme.

"We do not yet know whether or when a vaccine is approved, but I have tasked the NHS with being ready from any date from 1 December."

Earlier, Mr Hancock said the bulk of the rollout of a vaccine was always expected to be in the first part of 2021.

Asked about how many people would need to be vaccinated, Mr Hancock said: "The honest truth to that question is we don't know what proportion of the population vaccination needs to reach in order for this to stop the epidemic.

Earlier, Mr Hancock told the BBC that vaccinations would take place in care homes, centres such as sports halls and also clinics that would open seven days a week.

He said he was giving GPs an extra £150m to help with the roll-out, and he believed NHS staff "will rise to this challenge of being ready when the science comes good to inject hope into millions of arms this winter".

"There are many hard days ahead, many hurdles to overcome, but our plan is working and I'm more sure than ever that we will prevail together," he added.

Mr Hancock also said new rapid swab tests - which give results in less than an hour - will be made available across 67 local areas, after they were used in a mass testing trial in Liverpool.

Older care home residents and care home staff are at the top of a list from government scientific advisers of who should be immunised first, followed by health workers.

Mr Hancock said children would not be vaccinated.

Labour's shadow health secretary Jonathan Ashworth called on Mr Hancock to give priority access to relatives of care home residents so they can see their loved ones.

And he asked the government to publish a strategy on how the vaccine would be rolled out.

The Covid vaccine is the fastest ever vaccine to go from the drawing board to being proven highly effective.

It will not be released for use until it passes final safety tests and gets the go-ahead from the Medicines and Healthcare products Regulatory Agency.

"Our strong and independent regulator the MHRA will not approve a vaccine until it's clinically safe," Mr Hancock said. 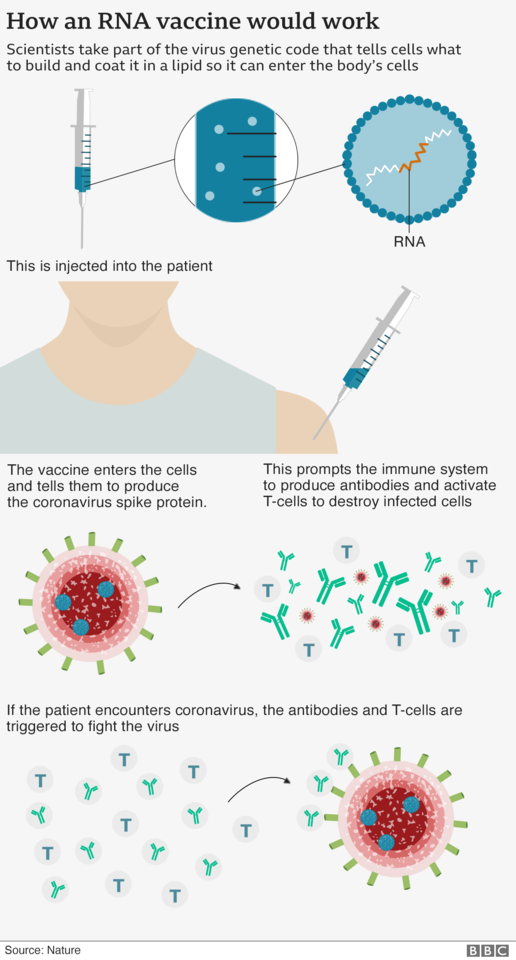 The British Medical Association, which represents doctors, said GPs have been told to prepare to give patients two vaccine doses - to be delivered between 21 and 28 days apart - during clinics that could run between 08:00 and 20:00 GMT seven days a week.

It added that, due to the logistics and delivery requirements, including the need to store it at very cold temperatures, it was likely that groups of GP practices would need to work together with one "designated vaccination site".

In Scotland, First Minister Nicola Sturgeon has said the government there has purchased around 20 large freezers to store the new vaccine at strategic locations.

Cautious optimism is the tone of today.

Matt Hancock insists the NHS will be ready to start deploying a coronavirus vaccine as soon as humanly possible.

If regulators are able to give the green light in the next few weeks, some people could get their jab before Christmas - a most welcome gift for those at highest risk of severe Covid-19 illness.

But he doesn't want people to get their hopes up too soon or assume life can now return to "normal". It can't.

It would be a colossal mistake to relax now and let the virus rip, say leading medical advisers.

Until and unless mass vaccination can happen, society needs to use the other weapons at its disposal to fight the virus and stop the spread.

That means sticking with the social distancing and face masks, and testing people who may have the virus and asking them to isolate.

The UK is still in the second wave and the actions taken by all of us now will influence how it plays out.

Data from the UK national statistics agencies also showed the number of deaths was more than 11% higher than normally expected.

It showed 1,597 deaths mentioning Covid on the death certificate in the last week of October - up from 1,126 the week before.

Although deaths usually do rise at this time of year, the data shows the second wave of the virus has pushed the death rate above the average seen over the past five years. 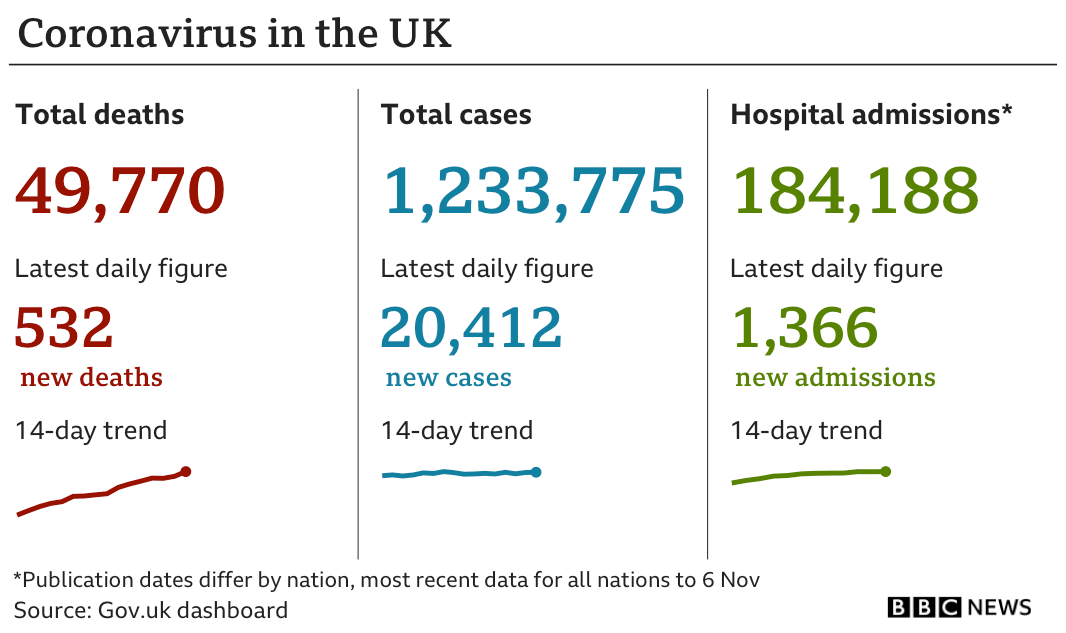 The government is sending 600,000 of the rapid tests out to more than 60 local directors of public health including "across Yorkshire, the West Midlands, other parts of the North West, and the whole of the North East".

And Nottinghamshire will follow the Liverpool in trialling mass coronavirus testing.

Matt Hancock: “Our plan is working and I am more sure than ever that we will prevail together”