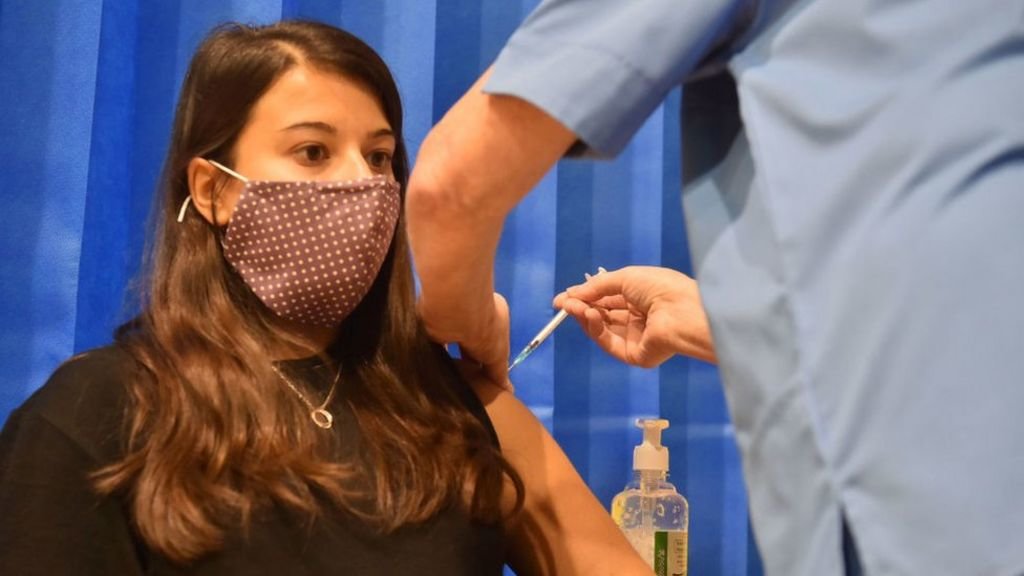 Vaughan Gething was reacting to First Minister Mark Drakeford's comments the supply had to last until February to prevent "vaccinators standing around with nothing to do".

In a later tweet, Mr Drakeford said "nobody is holding back vaccines", but the Conservative ex-Welsh secretary said his comments were "astonishing".

Mr Gething insists vaccines are being rolled out "as quickly as possible".

After Mr Drakeford's comments on BBC Radio 4's Today programme, the Welsh Government had said the reason for spacing out vaccine supply was to avoid wastage.

Asked about those comments, Mr Gething said: "We're rolling out the vaccination programme as quickly as possible.

"As the first minister's clarified tonight, we're not holding the vaccine back."

Public Health Wales said 151,737 people have been vaccinated, after at least 327,000 doses were delivered.

Mr Gething told BBC Wales Today: "It's as quickly as we build our infrastructure to deliver, as quick as we're able to get the vaccines out to be delivered."

The Conservative MP for Preseli Pembrokeshire told Gareth Lewis on BBC Radio Wales: "I just find some of the excuses that have been made for why we are so behind in terms of vaccinating the over 80s - it just doesn't wash with our constituents I'm afraid

"When people in my constituency watch the television and they hear the first minister say 'this is not a sprint' when so many countries around the world are treating it exactly as that.

"The faster you roll out the vaccinations to the most vulnerable, ie the over 80s, the more lives that will be saved."

A total of 4.8% of the population has been vaccinated in Wales, the same as in Scotland. This compares with 6.2% in England and 6.6% in Northern Ireland.

At the weekend the chairwoman of Wales' vaccination board Dr Gill Richardson, said the NHS was being supplied with as many vaccines as it could cope with.

On Monday, Mr Drakeford told the Today programme the supply of the Pfizer vaccine had to last until February and was not being used all at once.

"There will be no point, and certainly it will be logistically very damaging, to try to use all of that in the first week and then to have all our vaccinators standing around with nothing to do for another month," he said.

"The sensible thing to do is to use the vaccine you've got over the period that you've got it for so that your system can absorb it, they can go on working."

In a video he later posted on Twitter he said: "Let me be completely clear, nobody is holding back vaccines.

"All our health boards are receiving doses of Pfizer as quickly as they can use it."

The British Medical Association (BMA) Wales tweeted it was "extremely concerned" about "spacing out the Pfizer vaccine to make it last until the next delivery".

"If Pfizer vaccines are available, second dose must be given to HCWs [health care workers] within the maximum 42-day timeline and all remaining vaccinations for staff must be accelerated," it said.

The Welsh Government's vaccine strategy pledges everyone will be offered a jab by autumn.

The NHS is vaccinating people in order of clinical risk, largely based on age groups from old to young.

As the roll-out ramps up, vaccines in Wales will be given in mass vaccination centres, GP surgeries, mobile units - and on Friday, the first pharmacy gave the Covid jab. 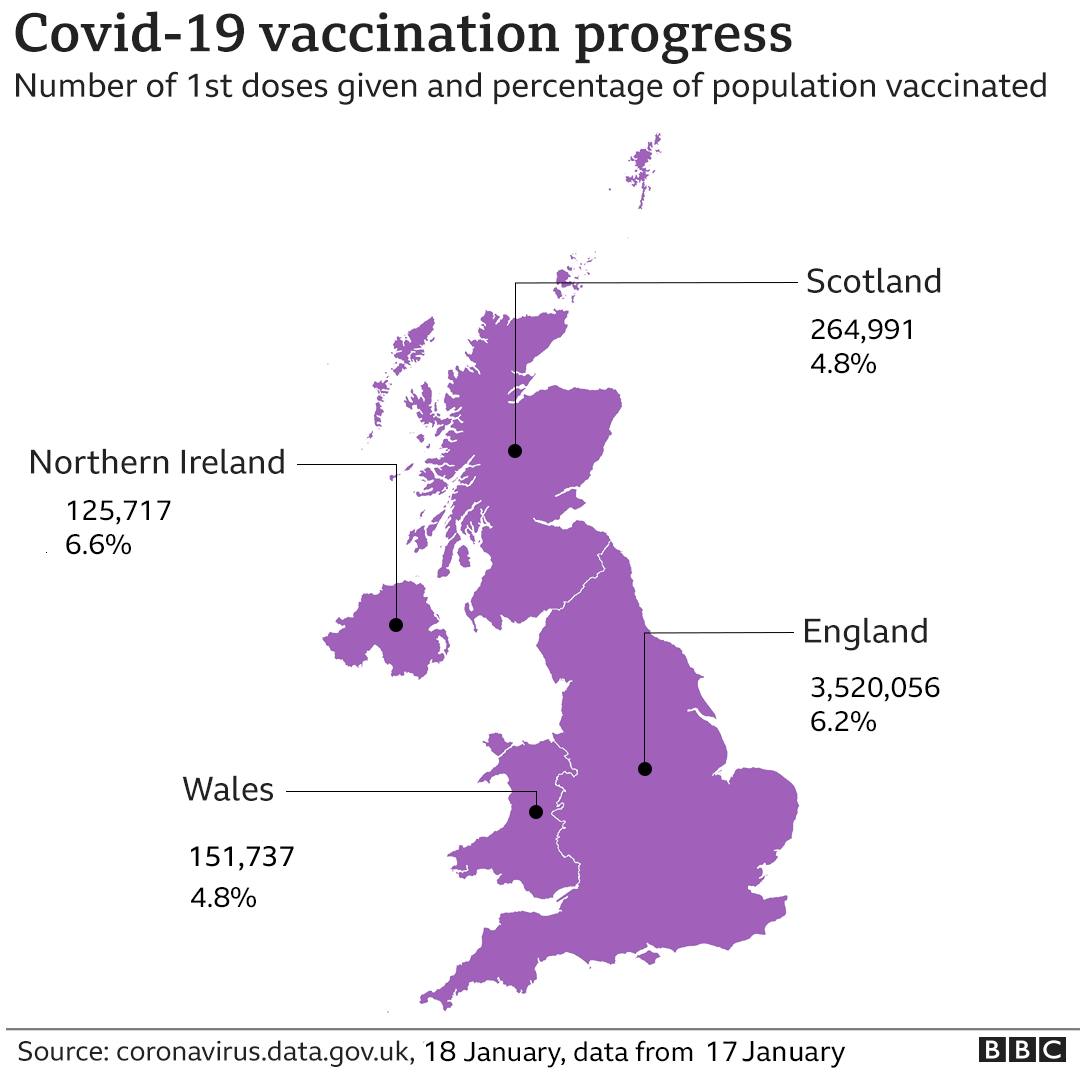 The Welsh Government said on Monday it was "on course" to complete 70% of vaccinations for over 80s and care home residents by the weekend.

It also confirmed that all ambulance staff had been offered the vaccine, and the ambulance service said so far more than 60% had had it.

In a statement, a government spokesman said: "The Pfizer vaccine comes in large packs, which cannot be split and must be stored at ultra-low temperatures - at -70C. There are only two centres in Wales where we can keep them at this temperature.

"Once removed from storage, the vaccine lasts five days. Every dose wasted is a vaccine which cannot be given to someone in Wales.

"We want to ensure a consistent supply of the vaccine to minimise wastage."

At a coronavirus briefing on Monday, Education Minister Kirsty Williams also said ministers were not holding back on supplies.

"We are distributing Pfizer in a careful way to ensure there is infrastructure in Wales to deliver it safely and most efficiently, avoiding wastage because it is such a precious resource," she said. 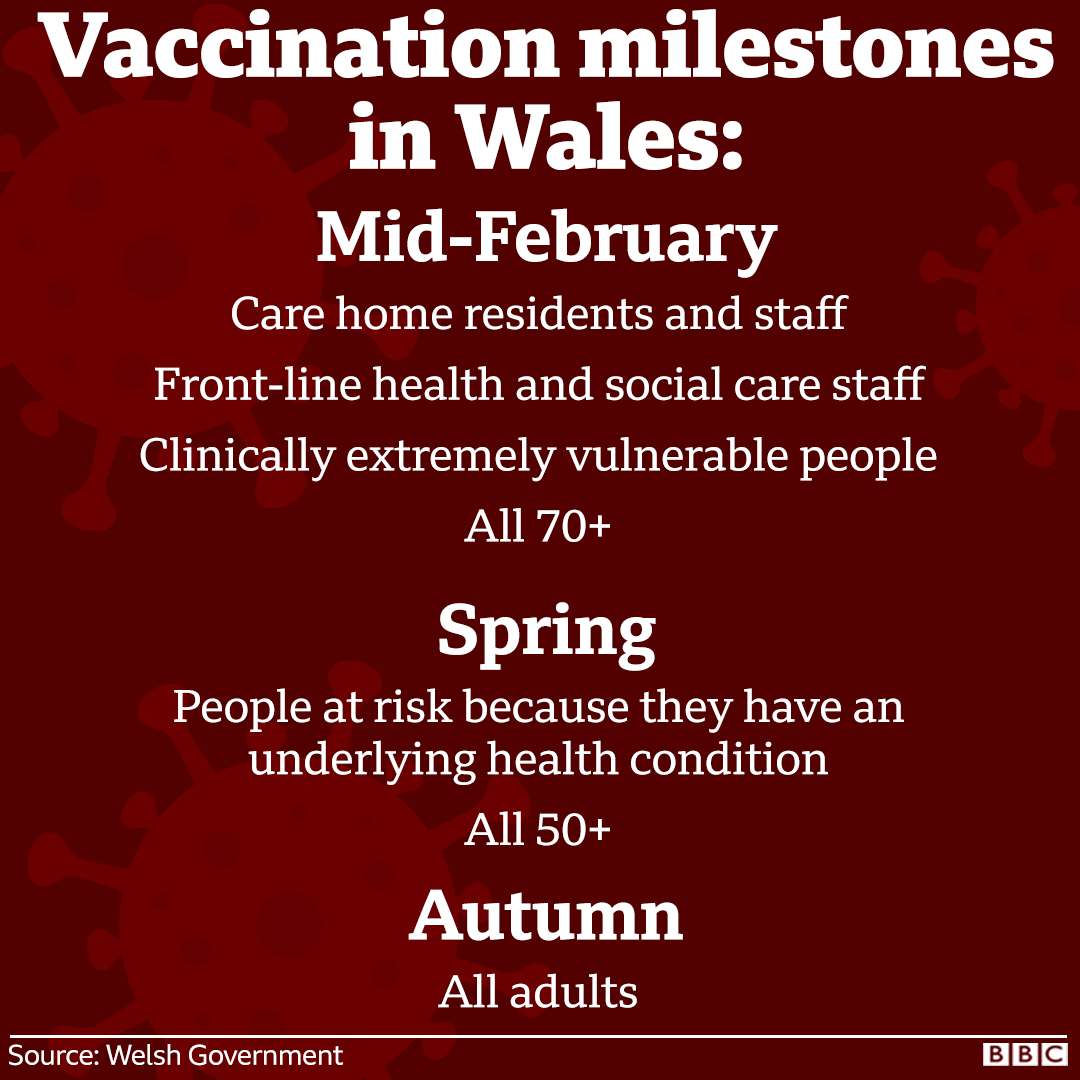 But Paul Davies, Conservative group leader in the Senedd, said his inbox had been "bombarded by people who are very, very angry" about the pace of the roll-out.

"Suggesting that holding back the vaccine for a period of time so vaccinators aren't standing around doing nothing is absolutely preposterous," he said.

We've heard from two senior government ministers this morning - one of them the first minister - and received different explanations of what the strategy is for vaccine roll-out.

The first minister talked about having to make the Pfizer vaccine last until February, otherwise vaccinators would be standing around with nothing to do.

His education minister today denied that Welsh Government was doing anything to delay the use of the Pfizer vaccine - she talked about the need to go faster and to build up infrastructure and minimise wastage.

People in vulnerable groups keen to know when they'll be receiving their jab won't be reassured by the lack of a coherent message.

Plaid Cymru health spokesman Rhun ap Iorwerth MS said: "Wales appears now to be dramatically behind England in terms of vaccine roll-out, so to see the first minister being relaxed about the slow pace of the vaccine roll-out here is very, very frustrating. Why are we rationing here?"

UK government vaccine minister Nadhim Zahawi, when asked about the strategy in Wales, said his view for England was to use up supply and ensure it "doesn't sit on a shelf or in a fridge".

There are currently two approved vaccines being administered in Wales - Pfizer-BioNTech and Oxford-AstraZeneca.

A third vaccine has been approved for use in the UK - made by US company Moderna - but supplies are not expected to arrive until spring.

There will be 35 mass vaccination centres across Wales but to ensure people - especially the elderly and those with mobility issues - can be inoculated where they live, about 250 GP practices across the country will be able to administer the jab by the end of January.

Ms Williams said that there would be 45 mass vaccination centres delivering the Pfizer jab by the end of the week.

How are the various health boards doing?

As of Monday, the Cardiff and Vale health board said it had vaccinated more than 24,000 people, including nearly 19,000 health, social care and care home staff, nearly 600 care home residents and nearly 3,000 other people aged over 80.

Cwm Taf Morgannwg health board in south Wales said it had vaccinated nearly 17,000 people as of Friday, and aimed to give all 100,000 people in the top priority groups at least a first dose by mid-February.

The Hywel Dda health board serving west Wales said on Monday it had given more than 18,000 vaccinations, including jabs to 42% of healthcare workers, 38% of care home staff, 25% of care home residents and just under 9% of other people over 80.

Powys Teaching health board said letters should arrive by Tuesday to everyone aged over 80 inviting them to get a vaccination, with more than 7,000 people in the priority groups having received their first dose.

In north Wales, the Betsi Cadwaladr board said it aimed to vaccinate 90% of the priority groups by the end of January.

In south east Wales, the Aneurin Bevan board's most recent update from 11 January said that in its 94 care homes for elderly people all residents had been vaccinated in 34 homes and all staff in 63. 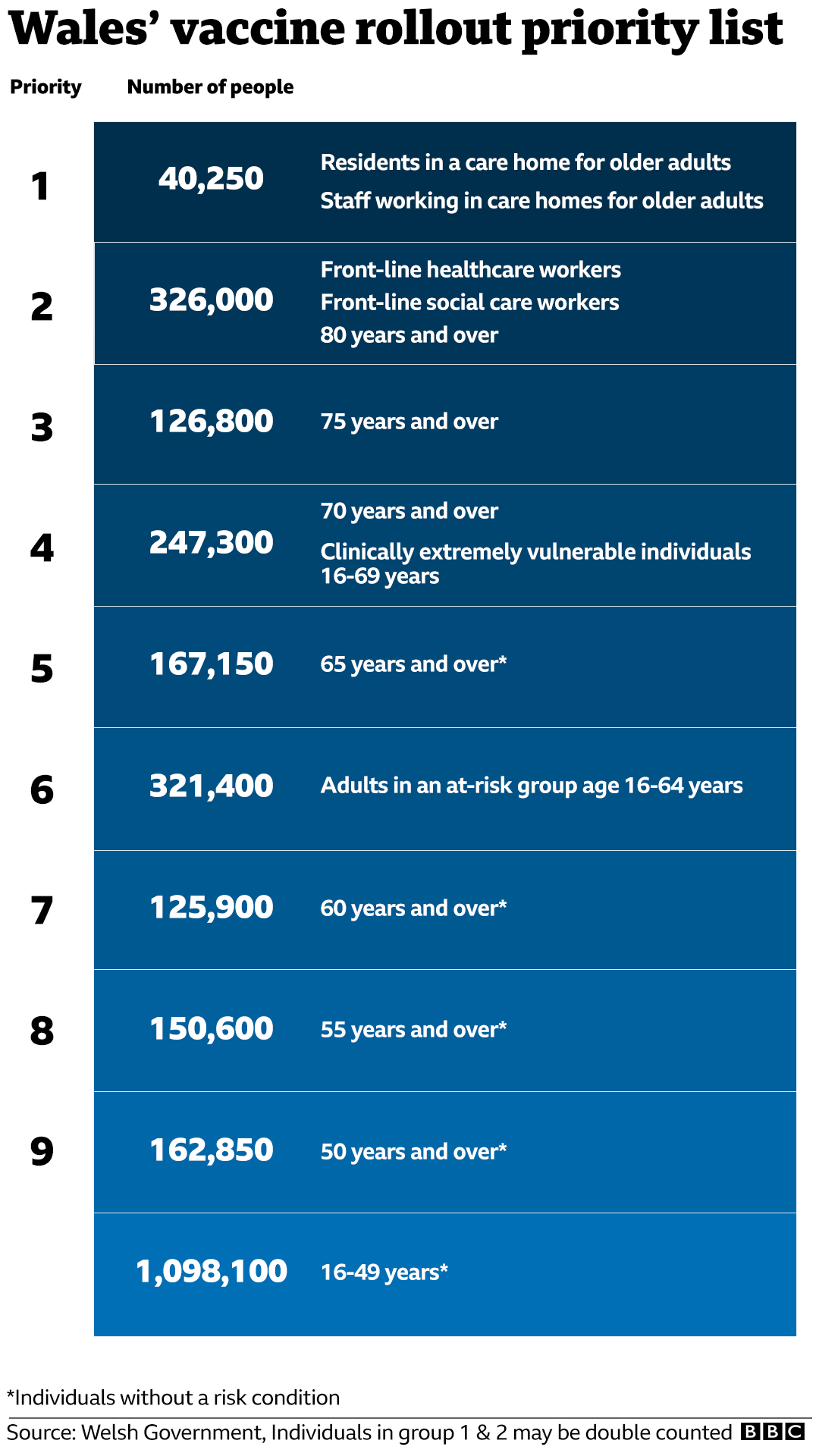