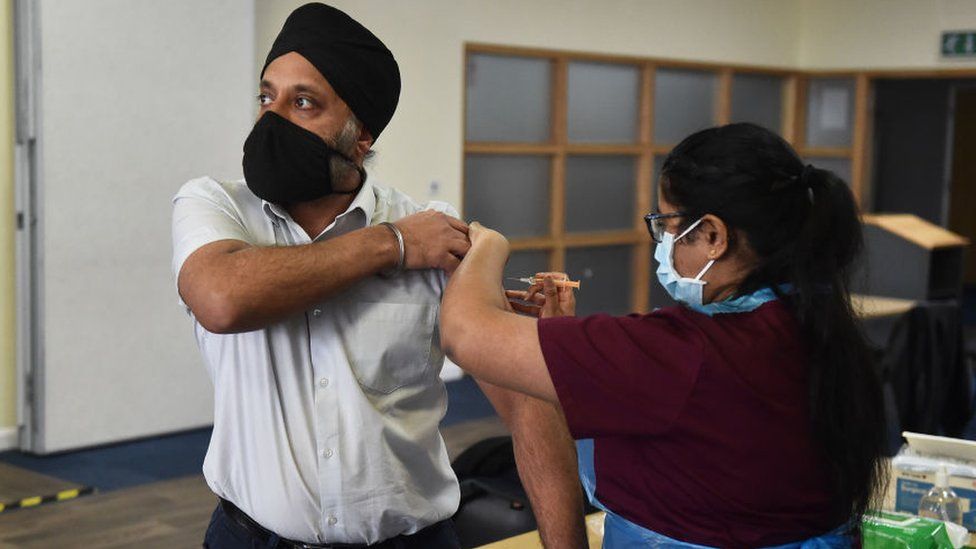 The UK's decision not to prioritise key workers such as teachers or police officers for a Covid jab is "the moral thing to do" and will "save the most lives", the health secretary has said.

Matt Hancock confirmed the second phase of the vaccine rollout would follow expert advice to focus on age groups.

More than one in three adults in the UK have now had their first jab.

One of England's top medics said Covid death rates were lower for teachers than several other professions.

Speaking at a coronavirus news conference at Downing Street, England's deputy chief medical officer also said the death rates for men in each of these groups were more than 100 deaths per 100,000, compared with 18.4 deaths per 100,000 male teachers.

"When we're getting down into phase two of the vaccine campaigns... being in the queue is more important than where you are in it," Prof Van-Tam added.

The government aims to give a jab to all over-50s and those in specific at-risk groups by 15 April, in what is known as phase one of the UK's Covid vaccine rollout.

It has pledged to complete phase two - where all other adults are offered their first dose - by 31 July.

The decision on what order to give phase two vaccines in comes after experts advising the government said priority based on occupation would be "more complex" and could slow down the programme.

All four UK nations will follow the approach recommended by the Joint Committee on Vaccination and Immunisation (JCVI).

Mr Hancock said: "Thankfully, teachers are no more likely to catch Covid than any other member of the population who goes to work, and so trying to come up with a scheme which prioritises one professional group over another would have been complicated to put in place and wouldn't have done what we asked the JCVI to do... which is to make sure that we minimise the people who die." 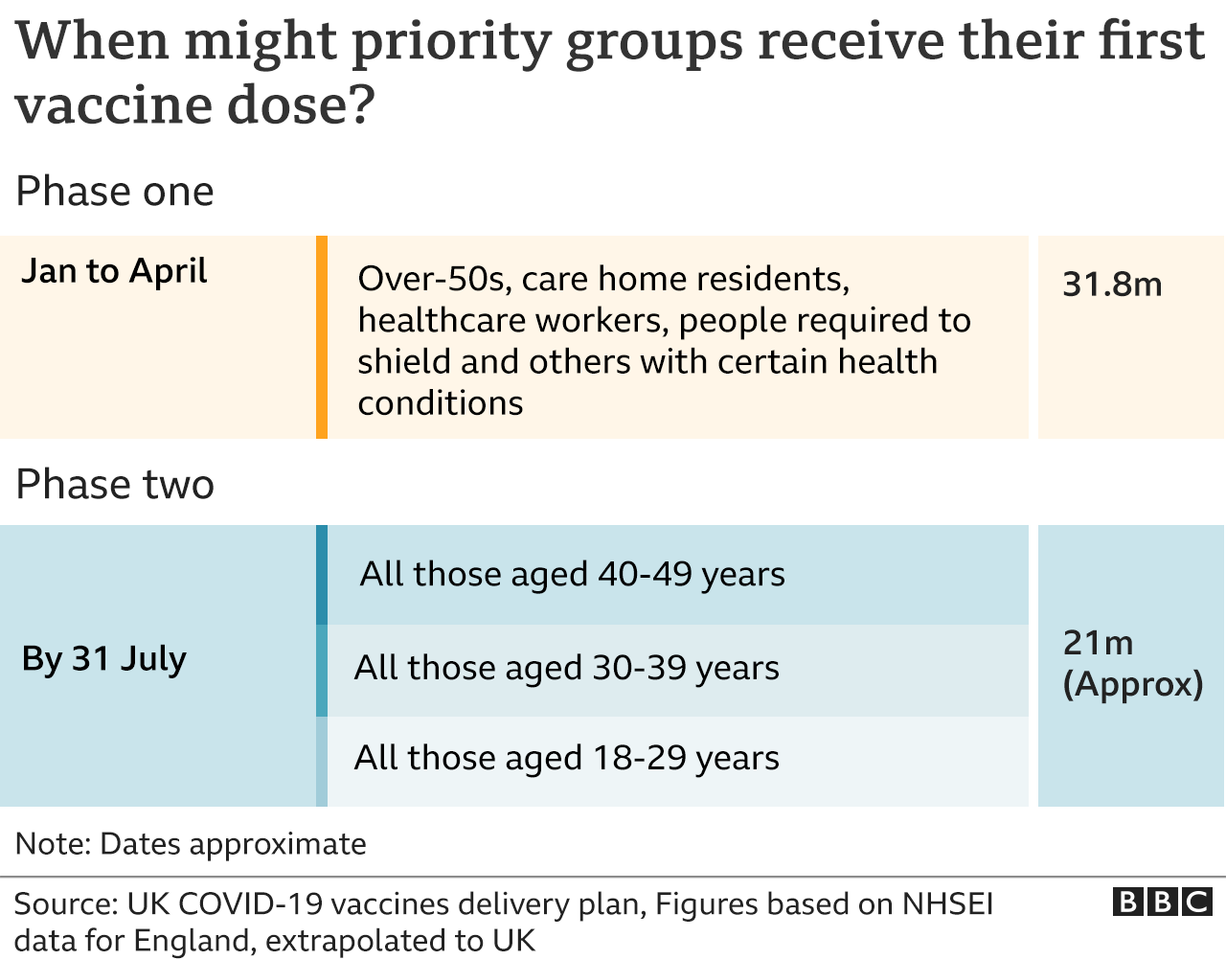 Unions representing teachers and police have criticised the decision.

Dr Patrick Roach, general secretary of the teachers' union NASUWT, said the government was "failing to take all steps possible" to ensure schools remained open "without the risk of further closures or of further damaging disruption to children's education".

A statement from the chief constables in Wales said: "Now the most vulnerable have been vaccinated we should seek to vaccinate those that risk their own safety and health."

Why the focus on age not occupation?

The next phase of the vaccination programme aimed at the under-50s is all about speed.

The more quickly they can be vaccinated, the more lives can be saved from Covid-19 which reduces pressure on hospitals and makes it more likely the road map out of lockdown can be delivered.

The government's committee of vaccine experts says that means people should be vaccinated according to what age they are and not what job they do.

It would be more complicated and more time-consuming to invite all teachers or police officers for their first dose than to make an offer to all those in their 40s, for example.

Research by the Office for National Statistics suggests a number of occupations have higher-than-average death rates, including restaurant workers, taxi drivers, metal workers and shop assistants - so which group would be prioritised first and how would they be identified?

The conclusion is that a fast, efficient rollout to all adults, by age group, is the best way to achieve the target of giving all adults a first dose by the end of July.

More than 19.1 million people in the UK have received their first jab so far, with 485,720 first doses given in the latest daily figure.

At least 95% of people aged 70 or over in Scotland and every region of England have received their first dose of the vaccine, apart from in London which has a slightly lower rate. Wales is also slightly behind.

Equivalent age-related data for Northern Ireland is not yet available but NI's Department of Health said that all care home staff and residents have now been offered first and second doses of the vaccine.

He said there were "some worry signs" that some people who have had the jab were "relaxing" their compliance with restrictions on socialising.

"It's a bit like being 3-0 up in a [football] game and thinking 'well we can't possibly lose this now'. But how many times have we seen the other side take it 4-3? Do not wreck this now, it is too early to relax," he said.

The health secretary also urged people to continue to observe the stay-at-home rules, saying: "We're nearly there - let's not blow it."

Mr Hancock pointed to a range of data that he said showed the pandemic "isn't over yet", including one in five local authority areas seeing a rise in cases in the past week.

Covid infections are continuing to decline with strict lockdown measures in place across the UK.

A further 345 people have died in the UK within 28 days of a positive coronavirus test, according Friday's daily figures, as well as 8,523 new confirmed cases of the virus.

Meanwhile, former Prime Minister Theresa May, 64, has received her first dose of the vaccine.

She said in a tweet that the jab was "effective and painless".