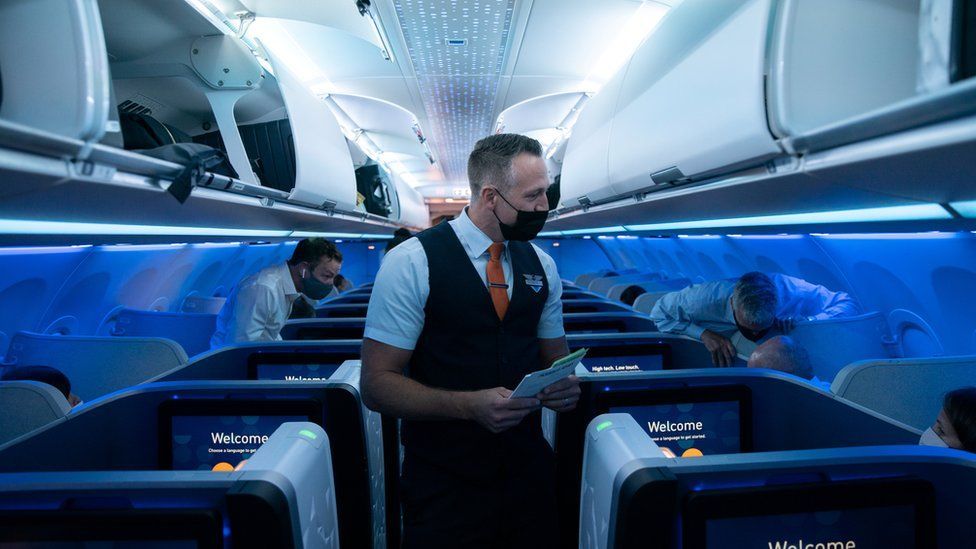 From November, foreign travellers will be allowed to fly into the US if they are fully vaccinated, and undergo testing and contact tracing.

The US has had tough restrictions on travel in place since early last year.

The move answers a major demand from European allies, and means that families and friends separated by the restrictions can be reunited.

White House Covid-19 coordinator Jeff Zients announced the new rules on Monday, saying: "This is based on individuals rather than a country-based approach, so it's a stronger system."

"Most importantly, foreign nationals flying to the US will be required to be fully vaccinated," he said.

US restrictions were initially imposed on travellers from China in early 2020, and then extended to other countries.

The current rules bar entry to most non-US citizens who have been in the UK and a number of other European countries, China, India, South Africa, Iran and Brazil within the last 14 days.

Under the new rules, foreign travellers will need to demonstrate proof of vaccination before flying, obtain a negative Covid-19 test result within three days of travelling, and provide their contact information. They will not be required to quarantine.

Officials said there would be some exceptions to the new policy, including for children who are not eligible to be vaccinated.

It was not immediately clear if the new rules applied only to US-approved vaccines, with Mr Zients saying this would be determined by the US Centers for Disease Control.

A White House source told the BBC that the question of whether people who have had the AstraZeneca vaccine or 12- to 18-year-olds who have only had one jab would be allowed in under the new rules was a level of "granular detail" that was still being worked out, though this would affect millions.

Americans who are not fully vaccinated will still be able to enter, but they will need to be tested before their return to the US, and after they arrive home.

Mr Zients said the policy would come into effect in early November, but did not give an exact date.

The new rules do not apply to land borders, meaning that restrictions continue to apply to cross-border travel with Canada and Mexico.

The easing of travel rules came as a surprise to many, after the US government last week said it was not the right time to lift the restrictions.

One British official told the BBC on Monday that the decision had come completely out of the blue.

"It's a fantastic boost for business and trade, and great that family and friends on both sides of the pond can be reunited once again," he wrote on Twitter.

German Vice-Chancellor Olaf Scholz also welcomed the change, saying it was "great news for German and European investments, our exports and transatlantic relations".

For months a joint working party has been looking at ways to relax the travel ban. The work, I'm told, has been detailed and assiduous.

But last Friday in Washington next to no one (not even in the Biden administration) was expecting today's announcement. So what's changed?

The Biden administration is aware of the growing disquiet among European allies about a range of issues - Afghanistan notably, but in recent days French fury over the Aukus submarine deal. And remember France is America's oldest ally.

This week Joe Biden will be meeting not only Boris Johnson, but a whole pile of EU leaders during the UN General Assembly in New York. And all had it on their dance cards to raise the travel ban.

According to one diplomatic source, the US over the weekend just weighed the countervailing forces: annoy some Americans with a policy that could be characterised as being weak on Covid; or continue to alienate your European allies who are growing increasingly irritable.

With the data no longer supporting the ban, this weekend came a decision. Out of the blue in one way, but quite logical in another.

Airline shares rose in response to the new travel rules, with British Airways owner IAG up as much as 10%.

"With the shared goals of health and safety always at the forefront, we're looking forward to welcoming more customers back to easy, seamless international trips for business, for leisure, and to reconnect with family and friends," he said.

"It's a happy day. Big Apple, here I come!" French entrepreneur Stephane Le Breton told the Associated Press news agency, as he looked forward to a trip to New York City that had been put on hold because of the restrictions.

The US has recorded more than 42 million coronavirus cases since the pandemic began, and over 670,000 deaths.