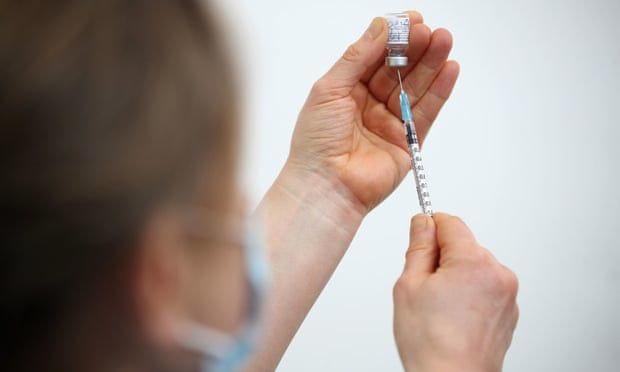 Guidelines say health staff can decide whether children receive jab without parental consent, as headteachers fear protests
Healthcare staff can decide whether children get a Covid vaccine against the wishes of their parents, according to government guidelines published on Wednesday that left some headteachers fearing protests at the school gates.

The guidelines say vaccinations for children aged 12 to 15 will be administered by School Age Immunisation Service (SAIS) teams that already carry out flu and human papillomavirus (HPV) vaccinations in England. The role of schools will be limited to providing a site and distributing information and consent forms to pupils and parents.

In cases where parents withhold consent but the child wants to go ahead, the guidelines say the vaccination teams will determine if the child is able to make an informed decision – known as Gillick competence – and “make every effort to contact a parent to check before they proceed”.

In cases where parents refuse consent and the child is not deemed to be Gillick competent or does not want to be vaccinated, the guidelines from the UK health security agency say a vaccination will not be given.

According to the NHS, Gillick competence is when children under the age of 16 “can consent to their own treatment if they’re believed to have enough intelligence, competence and understanding to fully appreciate what’s involved in their treatment”.

Some headteachers remain worried that parents who oppose vaccination may attempt to contact their child’s school directly, despite the school playing no part in the decision.

Jules White, the headteacher of Tanbridge House secondary school in Sussex, said many of his fellow school leaders wanted to avoid being caught up in any conflicts between children and their family over the issue.

White said: “The guidance seems to make it possible for a child considered Gillick competent to have a vaccination administered on a school site without permission from a parent or carer. While that decision will be made by trained professionals in the SAIS team, it leaves headteachers and other school staff in a potentially very difficult position.

“In a situation where an issue like this arises I would prefer the matter to be dealt with away from the school site – at, for example, a GP’s surgery or local medical centre.”

The guidance also warns schools to prepare for protests or other disruption.

It says: “We know that some schools are receiving campaign letters and emails with misinformation about the vaccine programme and would like advice on how to handle protests in the event they were to take place at school.

“In the event of a protest or disruptive activity outside a school, or if schools know a protest is planned, they should alert the SAIS provider, local authority and police contacts to discuss the best way to manage the situation.”

The UK’s chief medical officers this week decided to extend voluntary single doses of the Pfizer/BioNTech vaccine to children aged 12 to 15, after the Joint Committee on Vaccination and Immunisation had earlier said the benefits of immunising the age group were less certain than in older teenagers.

NHS foundation trusts have begun contacting schools to arrange on-site vaccination days, with some expecting to start seeking consent from parents shortly. Schools will be able to combine the Covid and flu vaccinations in a single visit.

Geoff Barton, the general secretary of the Association of School and College Leaders, said he welcomed the guidance clarifying that legal accountability for offering vaccines was with the school immunisation service, after headteachers reported receiving letters from pressure groups.

“The guidance is absolutely clear that schools are not responsible for mediating between parents and children who may disagree about whether or not to consent. This is the role of registered nurses in the School Age Immunisation Service,” Barton said.

“We are very concerned about the possibility of protests being held outside schools, and we are pleased to see that the guidance references this and provides advice about how to respond to this threat.”
#Vaccines  #BioNTech  #vaccine  #Pfizer  #Covid
Add Comment