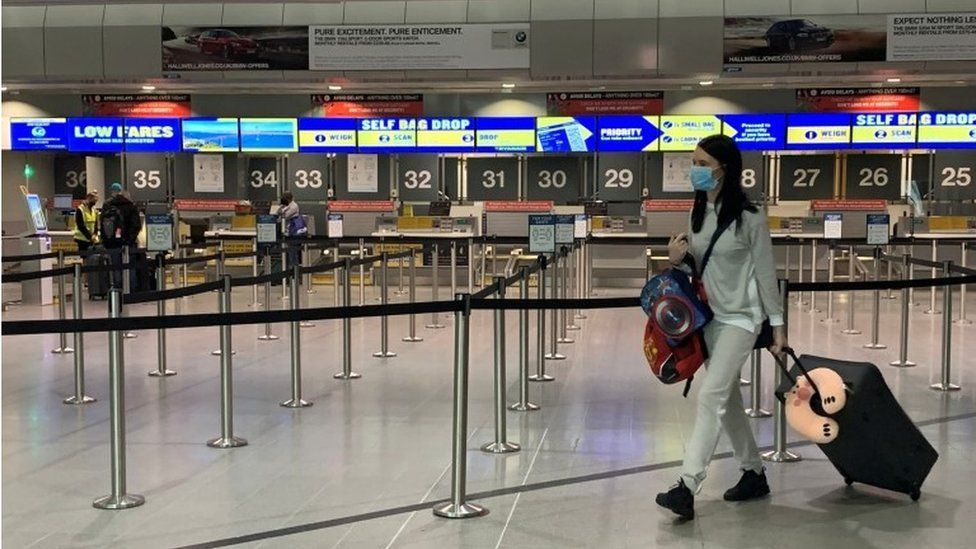 The owner of Manchester, East Midlands and London Stansted airports has called for an urgent review of travel rules.

Manchester Airports Group (MAG) said Covid restrictions needed to be removed when they were no longer worthwhile.

Health Secretary Sajid Javid told the House of Commons there would be less need to have "any kind of travel restrictions" if Omicron became the dominant coronavirus variant.

The Department of Health has been approached for a comment.

The government introduced new measures on Tuesday, which mean all travellers aged 12 and over now have to show proof of a negative PCR or lateral flow test - even if they are fully vaccinated - before setting off to the UK.

The chief executive of MAG, Charlie Cornish, said: "As a business, we will always do our part to protect public health, but we also need these temporary measures to be removed when they are no longer worthwhile.

"These restrictions may have slowed the arrival of Omicron but it is now transmitting in the community.

"The government needs urgently to review whether the rapidly reducing benefit of testing justifies the damage it is causing to consumer confidence."

Mr Cornish said passenger numbers had grown steadily earlier this year after restrictions had been eased.

However he said the reintroduction of "costly and inconvenient" testing requirements had created further uncertainty, delaying the the company's recovery.

A total of 6.6m passengers used the group's airports between April and September this year, compared to 36.4m for the same period in 2019.

MAG has reported a loss before interest and tax of £75.7m for the first six months of the financial year.