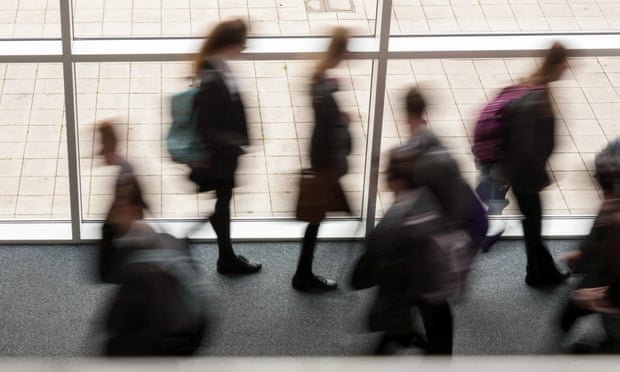 Covid: heads call for all lessons to go online for schools in mass testing areas

Unions say the measure would minimise disruption and urge government to carry out more tests where infection rates are high
Headteachers are calling for the government to allow secondary schools to move all teaching online for pupils undergoing mass coronavirus testing in London, Kent and Essex.

The National Association of Headteachers (NAHT) and the Association of College Leaders have written a joint letter to education minister Gavin Williamson, urging him to shut the doors of secondary schools and colleges whose pupils are being tested this week and to roll out the mass testing of students to other high infection areas in England.

The unions say the move would reduce the danger of infection transmission by these pupils in classrooms and on public transport, while avoiding a logistical nightmare for teachers and further disruption to children’s education. “We can’t simply ask already overburdened school staff to administer these tests, because it will just stop the education effort in schools,” said NAHT general secretary Paul Whiteman.

The Observer also understands that the government is considering mass testing of primary school children. The Department for Education said it would not be commenting on this matter: “It hasn’t been confirmed and therefore is speculation.”
Last week, the government began using its emergency powers under the Coronavirus Act to threaten legal action against headteachers in England who wanted to switch to remote learning this week.

Any schools that were planning to move most of their teaching online during the last week of term, to ensure none of their pupils would have to self-isolate on Christmas Day, are being ordered to remain open.

One headteacher in Hertfordshire was sent an official letter from the schools minister, Nick Gibb, warning him that the government was prepared to deploy its new powers under the act to ensure his secondary school remained open for all pupils until Friday.

The school, Presdales in Ware, was planning to teach the majority of its pupils remotely for the last week of term, while continuing to provide socially distanced, face-to-face lessons for vulnerable pupils and any other students who wished to come into school. Only about 25 pupils were expected to come in, so they could all sit two metres apart in class.

“We’ve had nearly 50 [positive] cases since September and a significant outbreak in one year group,” said the headteacher, Matthew Warren. “There is no chance, in the last week of term, that we’re not going to have any cases.”

On Tuesday last week, 170 staff and children – including half the English department – were off school, self isolating. Warren said teachers are now “dreading” having to call parents, particularly of younger pupils, to tell them their child would have to avoid all contact with anybody else on Christmas Day.

Warren had been keen to ensure his pupils did not have to endure this separation during the festive season. “For mental health, hearts and minds, we felt it wasn’t fair – and parents supported us overwhelmingly.”

Last Wednesday, the day before the school planned to close, Gibb wrote a letter to Warren, stating he was “minded to direct” the board of trustees to keep the school gates open and had the power to do this under schedule 17 of the Coronavirus Act. Refusal to comply would have allowed the Department for Education to first direct the board of trustees and then seek an injunction requiring the school to provide face-to-face lessons, according to Warren’s legal advice.

“We can’t defend that – it’s not a good use of public funds, which we’re desperate for,” he said.

A Department for Education spokesperson said it was a national priority to keep education settings open full time and it was vital children remained in school until the end of term.
#Covid  #Coronavirus
Add Comment