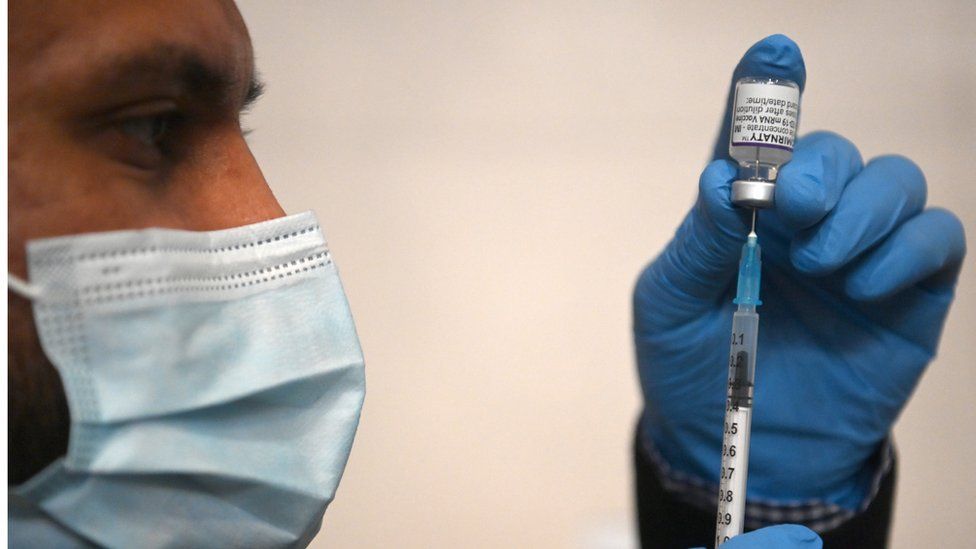 Practices can postpone minor surgery and routine health checks for over-75s and new patients until 31 March.

All adults in England are expected to be offered boosters by the end of January in response to the emergence of the Omicron variant.

A further 75 Omicron cases were confirmed in England on Friday.

Those cases took the total for England to 104. Since then, Scotland has recorded one further case on Saturday, taking the total for the UK as a whole to 135 - including one confirmed case in Wales.

On Saturday the UK reported a further 42,848 cases of coronavirus and 127 deaths within 28 days of a positive Covid test while 372,557 booster jabs were administered on Friday.

Dr Farah Jameel, the GP committee chair of the British Medical Association, said the new measures would release GPs from "filling out paperwork" and chasing unnecessary and often undeliverable targets.

"Whilst these changes make a difference and start to create some time, I think every single practice will have to look at just how much time it does release."

Dr Jameel said the measures would allow staff to prioritise the most vulnerable patients and support the "national priority" to vaccinate people as quickly as possible.

She insisted patients who were unwell or had worrying symptoms would continue to receive care from their GPs.

The plans would see GPs asked to defer treatment for the over-75s where it was clinically appropriate to do so.

Dr Gary Howsam, vice chair of the Royal College of GPs, said "capacity needs to expand" in order to meet the target of offering all eligible people a booster jab by the end of January.

"These are sensible, temporary measures that will address some of the bureaucratic demands on practices and have minimal impact on the care patients receive in general practice, allowing GPs and our teams to focus their efforts where currently most clinically necessary," Dr Howsam said.

However, Dennis Reed, director of Silver Voices, a campaign group for older people, said NHS England's proposals were a "blatant case of age discrimination" that suggested "once you reach the age of 75 your health is of less importance than the rest of the population". 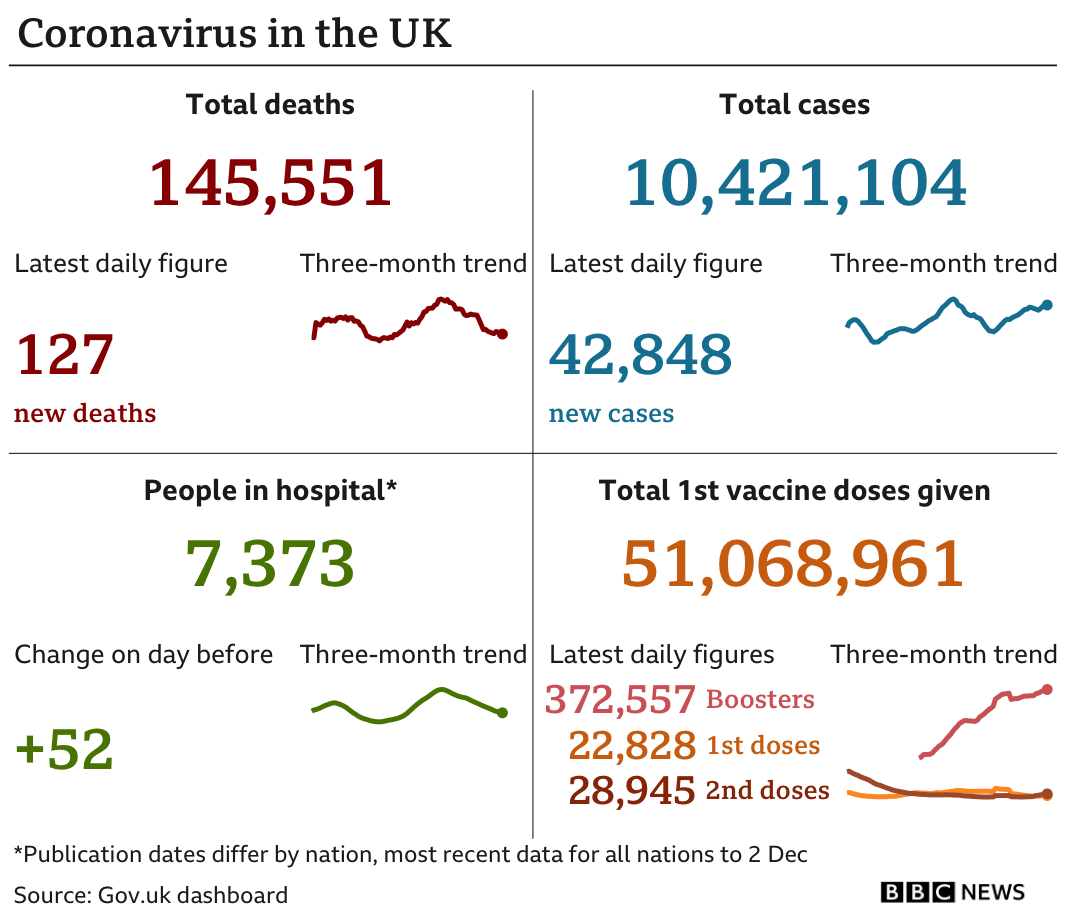 He said deferring checks for the early warning signs of illnesses such as strokes, cancers and diabetes was "counter-productive" as it would see patients "pushed out of primary care" and being treated in hospitals, which he said would not help with the burden on the NHS.

Prime Minister Boris Johnson's announcement of an expansion of boosters on Tuesday followed a series of recommendations made by the Joint Committee on Vaccination and Immunisation (JCVI).

As well as recommending that all over-18s in the UK should be offered top-up vaccines, the JCVI said the minimum gap between the second dose and boosters should be cut from six to three months.

In a letter released on Friday, NHS England acknowledged services were already under pressure but said there was a new "national mission" to increase vaccine capacity.

It also said the NHS's booking service for vaccinations in England would be updated "no later" than 13 December to allow all adults to book their top-up jabs and to reflect the change in guidance from the JCVI.

UKHSA chief executive Dr Jenny Harries said: "We are continuing to monitor the data closely. Teams nationally and locally are working at pace to identify and trace all close contacts of every Omicron case.

"We have started to see cases where there are no links to travel, suggesting that we have a small amount of community transmission."

Until the rollout was expanded, boosters had been restricted to those aged 40 and over, front-line health or social workers, and those with health issues.

Priority for boosters would still be given to those at the greatest risk, with jabs being given in descending age groups and to the most at-risk groups first, NHS England's letter says.

More than 19 million booster or third doses have been given in the UK so far, according to government statistics. 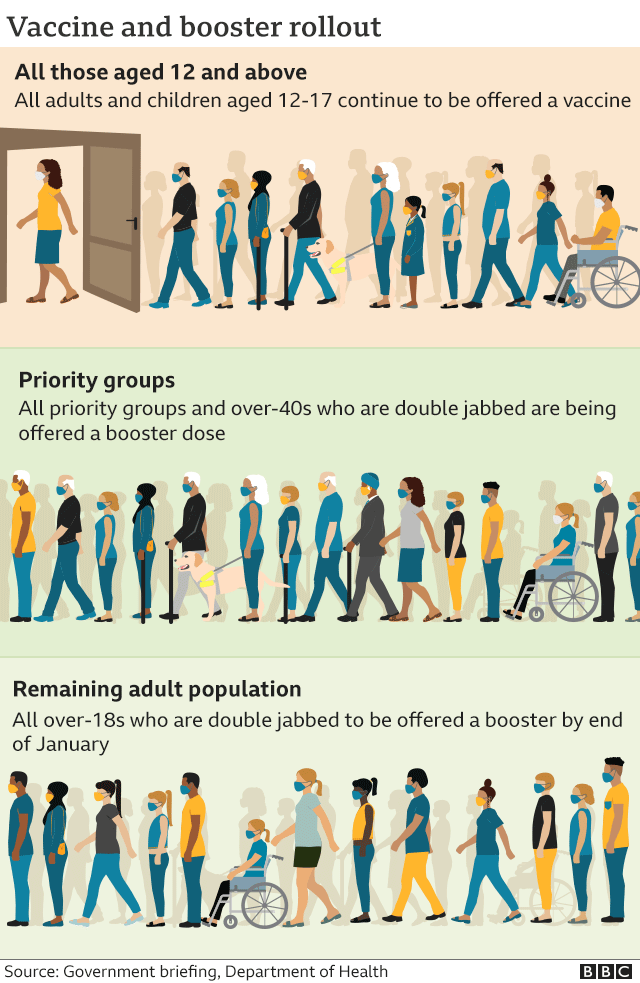 The rush to expand the vaccination programme has come as more cases of the Omicron variant, first identified in South Africa where it is driving a surge in infections, are found.

Scientists have raised concerns the heavily mutated variant may be able to escape immunity from vaccines.

The first case of the variant has been found in Wales, while 30 cases have been identified in Scotland - with six of these being linked to a Steps concert.